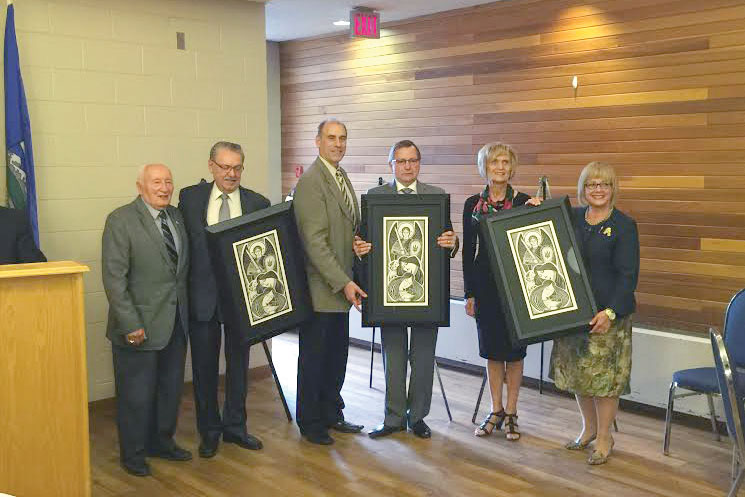 During the presentation of gifts of linocuts by artist Bohdan Holovatsky, (from left) are: Peter Dackiw and Gene Zwozdesky, Ivan Fedyna and Ed Stelmach, Ivanna Szewczuk and Janice Sarich.

EDMONTON, Alberta – The Ukrainian Youth Unity Complex in Edmonton, Alberta hosted an appreciation evening on May 25 to honor three legislators of Ukrainian heritage who have done much for Alberta’s Ukrainian community.

The evening was opened by board member Yuri Andryjowycz. He used the opportunity to echo the good news received early in the day that political prisoner Nadiya Savchenko was released from a Russian prison and had returned to Kyiv.

The president of the board of directors of the Ukrainian Youth Unity Council, Ivan Fedyna, acknowledged the great support received from the honored guests during their respective terms in office. He spoke not only of gratitude but also of the strong sense of pride that has been imparted on the Ukrainian Canadian community through the hard work of these individuals.

Ms. Sarich, who was the member of the Legislative Assembly from 2008 to 2015 for Edmonton Decore, represented the riding where the Ukrainian Youth Unity Complex is located. She is respected as a very hard-working legislator who spares no effort to support her constituents. She is extremely proud of her Ukrainian heritage and has continually demonstrated support for the Ukrainian community in word and deed. 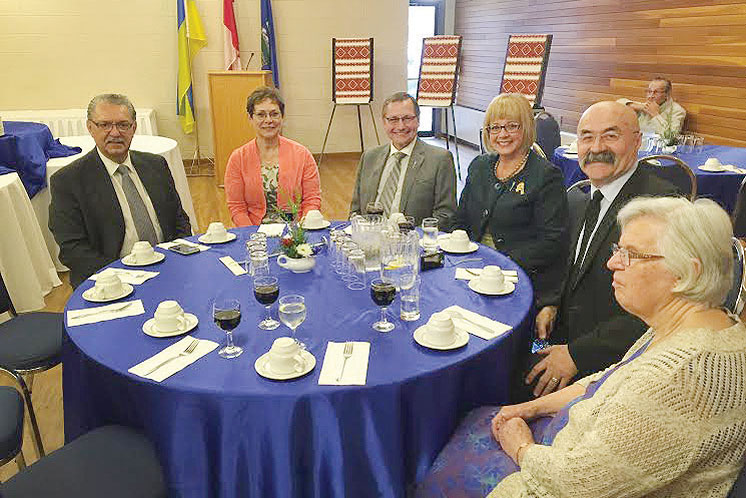 Mr. Zwozdesky is very well known in the Ukrainian community and beyond for his decades of work in the community. He started his career as an educator. After spending some years as a dancer with Canada’s world-renowned Shumka Dancers, he became their musical director, later composer and conductor. He served 22 years in the Legislative Assembly. During his tenure, he served as minister of aboriginal relations and deputy government house leader, and in the last three years served as the 12th speaker of the Legislative Assembly. Mr. Zwozdesky is known for his passionate support of all cultures.

The pinnacle of his career in the legislature was the successful passage of Bill 37 – “Ukrainian Famine and Genocide (Holodomor) Memorial Day Act.” This truly historic bill had all three readings in the Legislative Assembly in one day and received the unanimous support of all parties. It was only the second time in the history of the Alberta legislature that this happened.

With the determined and dedicated support of Peter Dackiw, former president of the Edmonton Chapter of the League of Ukrainian Canadians, Mr. Zwozdesky worked tirelessly for almost 10 years to get Bill 37 passed. Mr. Dackiw also spoke, highlighting this great accomplishment.

In his own remarks, delivered in Ukrainian, Mr. Zwozdesky stressed the need to nurture an interest in politics within the Ukrainian Canadian community and amongst its young people so that we can always have a voice at the table. He concluded by saying that the blood in our veins flows blue and yellow.

The third honored guest was former Alberta Premier Stelmach, who served in the provincial legislature from 1993 to 2015. During his term in office, he held various high-profile portfolios including those of minister of intergovernmental relations, minister of transport, minister of Alberta infrastructure, minister of agriculture, food and rural development. His last five years in office were as the province’s premier.

Mr. Stelmach is the grandson of immigrants who arrived in Canada in 1899 from a village northeast of Lviv, coming in search of a better life and land. Within 20 years in their new country, the Stelmachs acquired land, built a house and established a large family. Mr. Stelmach spoke passionately of the hardships endured by the first immigrants, the discrimination, isolation and backbreaking work, especially that borne by the women who looked after homesteads and many children while their husbands were forced to leave to find work elsewhere. Despite these adversities, he noted, Ukrainians have preserved their faith in God and in our Church. He strongly urged his listeners to make sure that the stories of the Ukrainians in Canada are told and preserved, because if we do not tell our stories, they will be lost.

He noted that the value of Bill 37 about the Holodomor is more than a political statement. It is also an educational tool with which to ensure that knowledge of this terrible genocide is preserved and passed on.

As a memento of the evening, each honoree received a framed linocut of the Archangel Michael created by Bohdan Holovatsky. The piece was commissioned to commemorate the 60th anniversary of the Ukrainian Youth Association in Canada, whose patron is the Archangel Michael. These were presented by Peter Dackiw, Ivan Fedyna and Ivanka Szewczuk, president of the Edmonton Chapter of the League of Ukrainian Canadian Women.

Everyone had an opportunity to mingle, visit and reminisce during an elegant wine and hors d’oeuvres reception prepared by the League of Ukrainian Canadian Women.