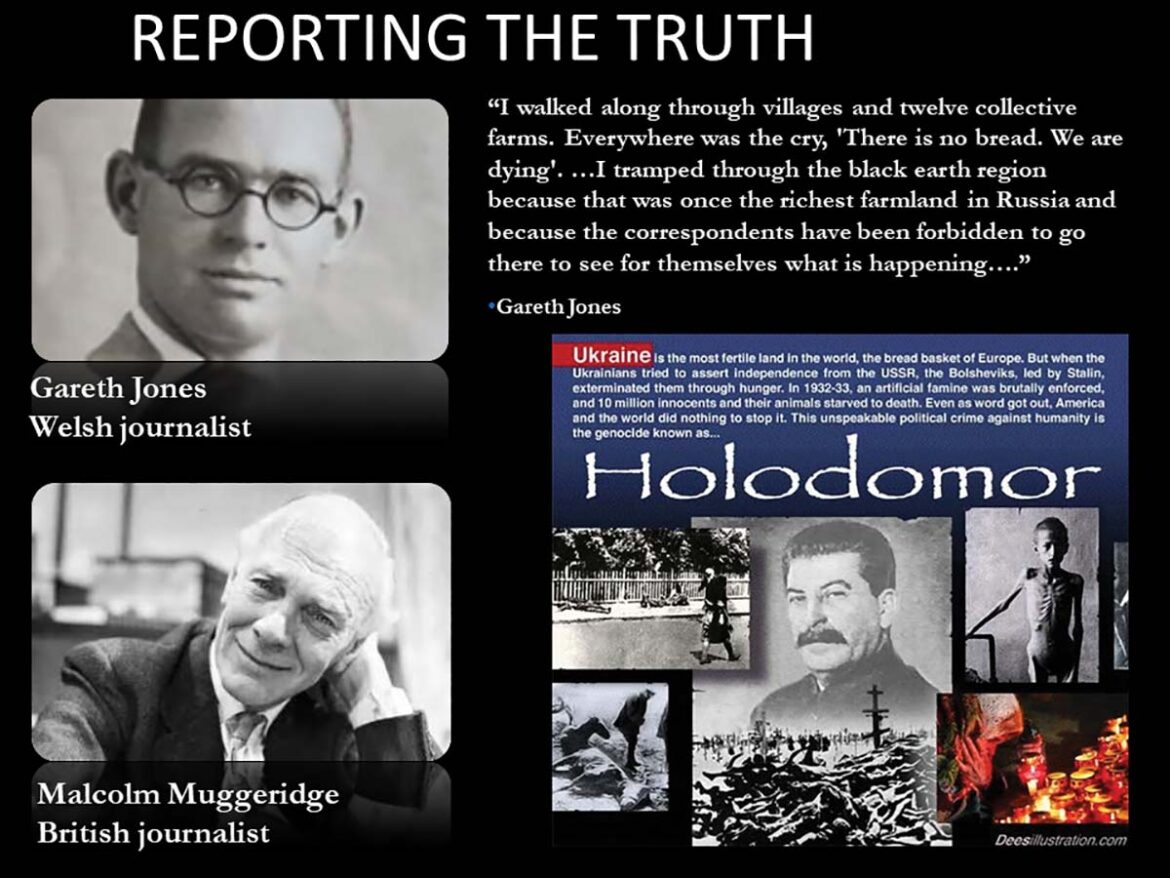 One of the slides used by Doris Duzyj in her presentation during the NCSS webinar.

Speakers in the webinar were Doris Duzyj of Michigan, Dr. Christopher Mauriello of Massachusetts and Michael Sawkiw Jr. of Washington.

The webinar began with a PowerPoint presentation by Ms. Duzyj explaining the vulnerability of Ukraine’s geographic location, its history of dominance by numerous empires and subsequent suffering, and persecution under Stalin’s regime. Statistical data about population losses was reviewed from the Harvard MAPA project. The apologist reporting by Walter Duranty of The New York Times, and the suppression of information from Gareth Jones and Malcolm Muggeridge were discussed in the context of disinformation and denial. Ms. Duzyj referred secondary school educators to numerous reference sources, lesson plans and films concerning the Holodomor.

Dr. Mauriello, director of the Center for Holocaust and Genocide Studies (CHGS) at Salem State University in Massachusetts, explained the center’s mission of teaching comparative genocides and human rights to today’s generation of students. Pictures were shared of CHGS students in Rwanda who were experiencing post-genocide reconciliation and reconstruction first-hand. Middle and high school teacher workshops are held at the CHGS on topics such as “The Attack on Truth: Media and Democracy.” By teaching the foundational themes of genocide (i.e., Dr. Gregory Stanton’s “10 Stages of Genocide”), the center creates a broader context for social justice and human rights education.

Michael Sawkiw Jr., chairman of the U.S. Committee on Ukrainian Holodomor-Genocide Awareness, spoke about Ukrainians in the diaspora. Images of prominent Ukrainian Americans in the arts, sciences and military were displayed for the webinar participants. Mr. Sawkiw explained to social studies teachers nationwide the state-by-state efforts to recognize the Holodomor as a genocide. He also discussed the recognition of the Holodomor by the United States government and the building of the Holodomor Memorial in Washington through the initiative of former Rep. Sander Levin (D-Mich.), former co-chair of the Congressional Ukraine Caucus. 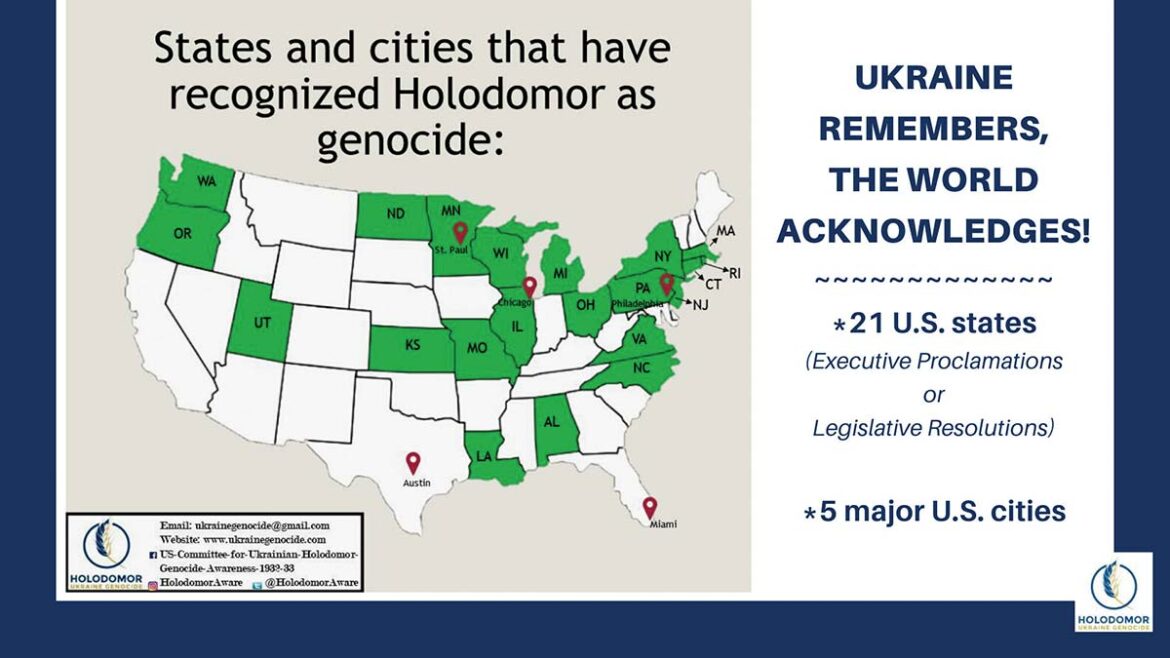 Information presented by Michael Sawkiw Jr. during the September 17 webinar of the National Council of Social Studies.

The National Council of Social Studies records its webinars and places them in its archives. Members have access to all webinars hosted by NCSS. It is hoped that the Holodomor webinar will be released to the www.ukrainegenocide.com website in the future, along with lesson plans for educator access. (Holodomor lesson plans for Michigan educators are currently on www.EduPaths.org.)

During the age of COVID-19 and the growing use of webinars, the U.S. Holodomor Committee has been encouraging its members to reach out to their respective state councils on social studies to collaborate on educational webinars. Members of the committee now represent 29 states across the United States. As a result, efforts are being made in several states to participate in virtual annual conferences. Thanks to the outreach of Roksolana Karmazyn of the Dallas (Texas) Holodomor Committee, members of the U.S. Holodomor Committee (Ms. Duzyj and Mr. Sawkiw) also presented at a webinar of the Texas Council for Social Studies conference “Power of Community” on October 2. The title of the webinar was the same as the NCSS webinar: “Stalin’s Cover-Up of the Ukrainian Famine Genocide, 1932-1933: The Original Fake News.”

Future plans of the U.S. Holodomor Committee include:

— Virtual ceremonies for the fifth anniversary of the Holodomor Monument in Washington on Saturday, November 7, (details to follow);

— Partnering with a food pantry in November for virtual donations in the amount of $19.33 (symbolic gesture for the year of the Holodomor);

— Promotion of the Holodomor curriculum within social studies lessons in public high schools throughout the country;

— Creation of a descendants’ network for Holodomor survivors and their offspring; and,

— Heightened awareness of the sale of memorabilia and products with Soviet symbols on the Internet.

For more information on advancing Holodomor awareness and Holodomor curriculum within public high schools, readers may e-mail Ms. Duzyj at Doris99@aol.com or the U.S. Holodomor Committee at UkraineGenocide@gmail.com, or go to the website www.ukrainegenocide.com.