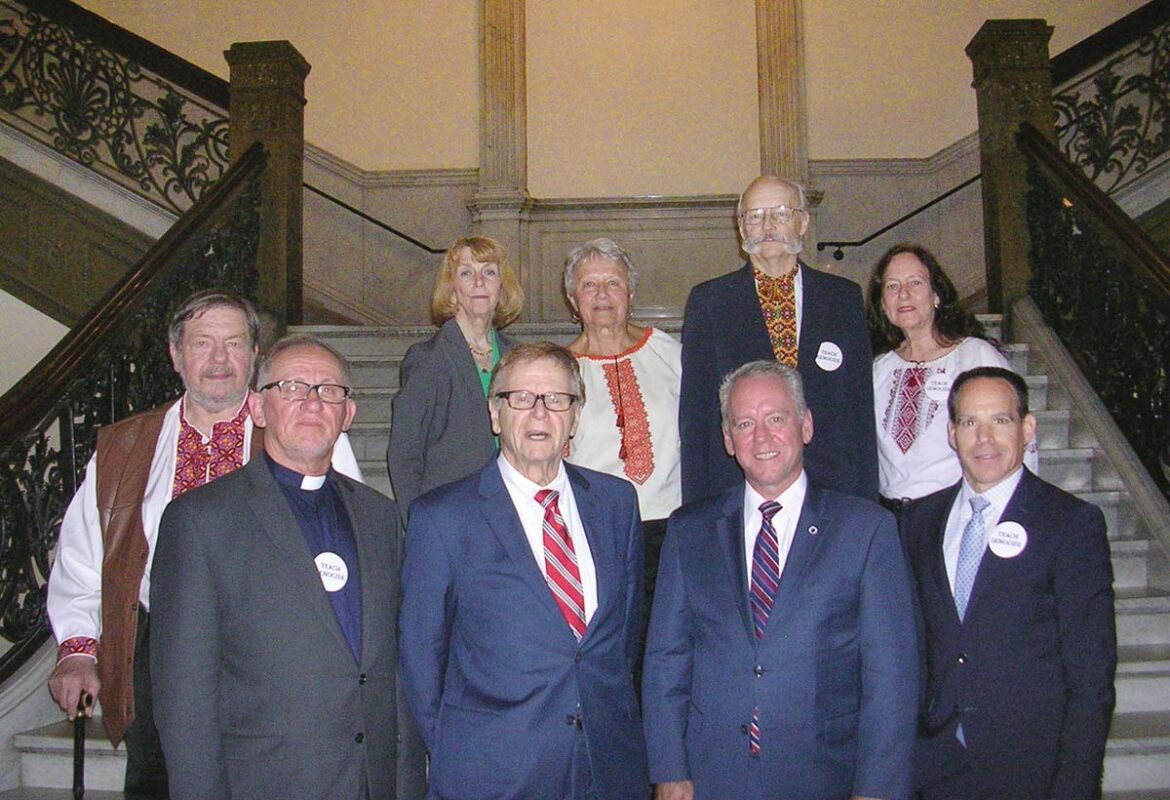 Members of the Boston Holodomor Committee at the Massachusetts Statehouse in October 2019 after testifying in favor of a genocide studies bill that would include the Holodomor. In the front row, second from right, is State Rep. Jeffrey Roy, chair of the Joint Committee on Higher Education.

WASHINGTON – For nearly fifteen years, the U.S. Committee for Ukrainian Holodomor-Genocide Awareness (U.S. Holodomor Committee) has worked diligently to raise the awareness of the American public about one of the least known tragedies in the world – the 1932-1933 Famine-Genocide in Ukraine, or Holodomor. The quintessential accomplishment was the dedication of the Holodomor Memorial in Washington on November 7, 2015, attended by Ukraine’s First Lady Maryna Poroshenko, hierarchs of the Ukrainian Catholic and Ukrainian Orthodox Churches, members of Congress, and thousands of community activists from throughout the country.

Since that historic event in Ukrainian American community’s history, the U.S. Holodomor Committee continued its important work by holding the first-of-its-kind Holodomor Forum in the United States in October 2019 in Philadelphia. The three-day forum was designed as an opportunity to bring domestic and international experts together on Holodomor-related issues. It featured workshops delving into practical topics of advancing Holodomor curriculum in the United States; political recognition of the Holodomor as genocide; social and mass media awareness campaigns about the Holodomor; and efforts to rescind The New York Times correspondent Walter Duranty’s Pulitzer Prize for his articles, which were wrought with Soviet propaganda, including denial of the Famine taking place in Ukraine.

Additional projects include disseminating a 15-minute documentary titled “When We Starve” about the tragic physiological, psychological and social effects of hunger; updating the Holodomor Committee’s state-of-the-art website with the latest information on the genocide committed by Joseph Stalin in Ukraine; petitioning Amazon.com through a social media campaign to remove apparel bearing Soviet symbols; and designing a “mobile” modular Holodomor exhibit for display in various public venues throughout the United States.

Particular emphasis is being placed on integrating teachers’ lesson plans about the Ukrainian Holodomor into U.S. public high school curricula. A follow-up to the Holodomor Forum was to be held in Philadelphia in May, specifically on the topic of Holodomor curriculum, but due to the COVID-19 pandemic the forum was postponed. New opportunities arose during the pandemic in partnering with national organizations such as the National Council on Social Studies (NCSS), which has agreed to host a Holodomor curriculum webinar in September for social studies teachers in the United States. Similar curriculum webinars are being explored in other regions or states with social studies councils.

The U.S. Holodomor Committee is also actively seeking opportunities on a state-by-state basis to legislatively mandate genocide studies that would include the study of the Holodomor in states’ high school social studies curriculum.

The film “Mr. Jones” has prompted a renewed attempt to revoke Duranty’s Pulitzer Prize for his blatant dissemination of Soviet propaganda. A multi-pronged media campaign is being orchestrated to raise awareness of the issue and appeal to the Pulitzer Committee to posthumously revoke the prestigious award. Plans call for interacting with journalists who have written reviews of the movie, citing the unethical journalistic standards of Walter Duranty; preparing op-eds to be placed in news publications throughout the United States; networking with schools of journalism at major U.S. colleges and universities on the topic of journalistic ethics; and filing an online petition to the Pulitzer Committee. The release of the campaign is expected later this month.

At the Holodomor Forum last year, the formation of a Holodomor Descendants’ Network was deemed to be a priority in order to ensure global knowledge about the Holodomor. The network’s purpose is to create a personal and perpetual voice for familial stories through generations of descendants of Holodomor survivors. Descendants are requested to complete an online form (soon to be available) on the U.S. Holodomor Committee website.

The U.S. Holodomor Committee is actively supporting the Holodomor National Awareness Tour’s (HNAT) initiative to have the word “Holodomor” included in English-language dictionaries. The community is requested to access and sign a petition on the website http://deeptruth.ca; visit the website to view the deepfake video featuring a Joseph Stalin look-alike, and additional information (posters, graphics, etc.); post the petition on your social media pages; and share this information with your friends and family.

This year marks the fifth anniversary of the dedication and unveiling of the Holodomor Memorial in Washington. An anniversary observance was discussed during the Holodomor Forum in Philadelphia in October 2019, but plans for the event have now transitioned from a physical gathering to an online/remote commemoration. While details are pending, initial plans call for a multiple-location ceremony including greetings from embassies in Washington whose countries have recognized the Holodomor as genocide; a religious service conducted by hierarchs of Ukrainian Churches; images broadcast from the Holodomor Memorial; and a musical component. The event is scheduled for Saturday, November 7, exactly five years to the day of the dedication ceremony in 2015.

Many of the ongoing projects undertaken by the U.S. Holodomor Committee will lead up to the 90th anniversary commemoration of the Holodomor in the years 2022-2023.

Distribution of information is crucial to promoting awareness of the Holodomor. The U.S. Holodomor Committee asks Ukrainian community members to:

The U.S. Holodomor Committee also has various Holodomor-related items on sale to help defray costs of the aforementioned projects. Articles to purchase include Holodomor pins and wristbands; the Holodomor Memorial dedication book; as well as an iWallet that can be affixed to the back of a mobile phone to hold ID and credit cards.

To initiate a campaign in your city, join monthly conference calls or purchase Holodomor-related items for your community, readers may contact the U.S. Holodomor Committee at UkraineGenocide@gmail.com.