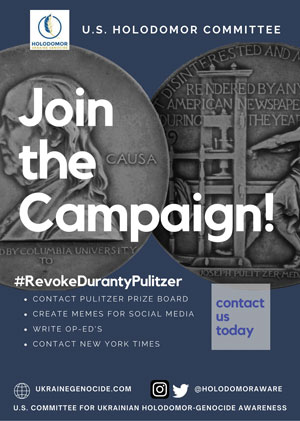 The U.S. Committee on Ukrainian Holodomor-Genocide Awareness released the following statement on March 23.

WASHINGTON – The U.S. Committee on Ukrainian Holodomor-Genocide Awareness (herein referred to as U.S. Holodomor Committee) has begun a national campaign to ask the Pulitzer Prize Board to reconsider their 2003 statement and finally admit that they made a mistake and negate the Pulitzer Prize awarded to Walter Duranty. Duranty was the New York Times’ Moscow correspondent during Joseph Stalin’s murderous reign over the Soviet Union who lied about the circumstances of Stalin’s genocidal policies.

The mission of the revamped Duranty revocation campaign is to recruit allies and coordinate efforts to convince the Pulitzer Prize Board to reverse its defense of the 1932 Pulitzer Prize to propagandist Walter Duranty. “For more than 20 years, the Pulitzer Prize Board and The New York Times have fallen silent to the pleas of Ukrainians to correct an unconscionable wrong – awarding the prestigious prize for journalism to a man who knowingly contributed to the starvation of millions of Ukrainians,” said Oksana Piaseckyj, chair of the Duranty Revocation Subcommittee.

Duranty claimed that there was no starvation in Ukraine during the genocide known as Holodomor, stating that only some people were hungry. He was a master of “fake news,” which was accepted by a gullible and complicit European and American public, citing Duranty’s prestige as the authority on the Soviet Union.

The U.S. Holodomor Committee Duranty revocation mission begins in springtime 2021, when the Pulitzer Prize Board meets and selects their 2021 Pulitzer Prize honorees. Furthermore, as April is designated Genocide Awareness Month throughout the world, U.S. Holodomor Committee Chairman Michael Sawkiw, Jr., said: “The Ukrainian community requests and implores the Pulitzer Prize Board to ultimately do its morally acceptable part, after 89 years, in revoking Duranty’s undeserved prize.”

First, to build a network of journalists and educators, empowering them to continue writing articles, editorials, and promoting the great travesty of mistruths and lies perpetrated by Walter Duranty. The goal is to engage at least one top-tier media outlet to cover the campaign with a substantive story. Prominent spokespeople have been enlisted for their support in this massive effort.

Second, to request that the Ukrainian American community, especially students, use social media to promote an awareness campaign to help with media pitching, design work and writing.

Third, announce a social media contest to develop and post Duranty memes with the hashtag #RevokeDurantyPulitzer. Examples of memes are available on the U.S. Holodomor Committee website, under the Duranty revocation tab, and can be found at the following web address: https://ukrainegenocide.com/duranty-revocation/.
Fourth, spur a worldwide petition on change.org for the revocation of Duranty’s Pulitzer Prize.

For more information about the campaign, please contact the subcommittee chair at the following email address: Holodomor.DurantyRevoke@gmail.com.

This and many other ongoing projects, undertaken by the U.S. Holodomor Committee, will help guide greater awareness of the Holodomor as genocide and ramp up to the 90th anniversary commemoration of the Holodomor in the years 2022-2023.

Distribution of information is important as a means of promoting awareness for the Holodomor. The U.S. Holodomor Committee requests that individuals take the following actions to help the cause:

• Visit the U.S. Holodomor Committee’s updated website www.ukrainegenocide.com for more information on the Holodomor and activities around the country
• Share on social media via Facebook, Twitter, and Instagram. Please send your photos, links to articles, and other information about your events and milestones;
• Request and help distribute a brochure that is available free of charge to communities advocating for Holodomor recognition;
• Donate your time and resources to make Holodomor awareness prominent throughout the United States. To contribute, donate online or send checks payable to U.S. Holodomor Committee to the following address: U.S. Holodomor Committee, 9901 Harrogate Road, Bethesda, MD, 20817

To initiate a campaign in your city or join monthly conference calls, please contact the U.S. Holodomor Committee by e-mail at UkraineGenocide@gmail.com. Our theme as we work together to expand worldwide awareness of this crime against humanity is clear: “Ukraine Remembers – the World Acknowledges!”