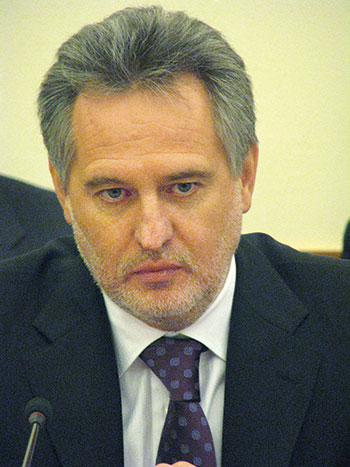 Vienna’s Higher Regional Court reversed a lower court’s ruling from April 2015 that said U.S. authorities were partially politically motivated in their pursuit of Mr. Firtash over $18.5 million in kickbacks that he allegedly arranged for Indian officials in order to mine titanium for Boeing, a major aerospace company and mainstay U.S. military government contractor.

Worth an estimated $250 million, according to Forbes, Mr. Firtash, 51, has repeatedly denied the allegations. He looked bewildered and shocked upon hearing Judge Leo Levnaic-Iwanski’s ruling.

“It wasn’t for us to judge whether Mr. Firtash was guilty, but only whether the extradition is allowed,” the judge said, as cited by Bloomberg. “This decision only means that another country will make a decision whether he is guilty.”

Walking out of the courtroom, Mr. Firtash said the score was “one-to-one,” when a journalist asked for his reaction, according to a video that The Insider’s Serhiy Scherbina streamed on Facebook.

But then plainclothes authorities of the Austrian government took him into custody near the courtroom’s elevator on a separate extradition order from Spain. Those charges stem from a 10-million euro money-laundering case involving real estate and restaurants that emerged in November 2016 and which includes two unnamed suspects.

Spanish media have reported that Mr. Firtash, who also has denied the charges through his lawyers, led a money-laundering ring in Catalonia – a Spanish province – with origins in companies that are registered in the tax havens of Cyprus and the British Virgin Islands.

Austria’s justice minister now has the final say on whether to extradite the Ukrainian oligarch and, if so, where. If extradited to the U.S., Mr. Firtash – a consistent advocate for closer Moscow-Kyiv relations – will appear in federal district court in Chicago based on a grand jury indictment dating to January 2012.

The Federal Bureau of Investigation since 2006 has been probing into whether a gas-trading company Mr. Firtash co-owned with Russia’s Gazprom was connected to Ukrainian-born Semyon Mogilevich, another suspect sought by the law enforcement agency. Mr. Firtash has denied any links to him, despite a statement he purportedly gave to former U.S. Ambassador to Ukraine William Taylor Jr. that he needed Mr. Mogilevich’s approval to enter the lucrative gas business, according to a confidential diplomatic cable made public by Wikileaks.

A Ternopil Oblast native who worked for a fire department during the Soviet days, Mr. Firtash made much of his fortune – which once surpassed $1 billion – as a monopoly natural gas supplier to Ukraine in partnership with Gazprom.

He is also a one-time backer of disgraced ex-President Viktor Yanukovych and still wields heavy influence with the Russian-friendly parliamentary faction Opposition Bloc, the main offshoot of the former ruling Party of Regions.

His portfolio includes co-ownership of Inter Media Group, whose main TV channel is one of Ukraine’s highest rated, and four chemical companies that produce nitrogen fertilizers, as well as agricultural and other assets, including residences in London and Vienna, the latter of which is where many of his businesses are ultimately registered.

More Russian help came in 2014, when Vasily Anisimov, a Russian billionaire oligarch who heads the country’s judo governing body – Mr. Putin’s favorite sport – bailed Mr. Firtash out in Vienna for a record 125 million euros after he was first detained on March 12, 2014, upon U.S. authorities’ request. Mr. Anisimov is a close ally of Arkady Rotenberg, a longtime of friend of the Russian president.

A Reuters report has found that by March 2011, Gazprombank had registered credit lines of up to $11.15 billion to Firtash-affiliated companies.

Mr. Firtash had told journalists that he has had a 17-year relationship with the Russian bank, but the November 26, 2014, Reuters report stated that it started lending to the Ukrainian mogul after the exiled Ukrainian president was elected in 2010.

And during Mr. Yanukovych’s presidency, the embattled oligarch had close associates in power. They include Serhiy Lyovochkin, who headed the president’s administration, and Yuriy Boiko, who served as the energy minister and vice prime minister. Another political surrogate was Yevhen Bakulin, who headed the state-owned oil and gas monopoly Naftohaz Ukrainy.

During his three-year extradition battle in Vienna, Mr. Firtash has relied on a heavyweight legal team that includes former U.S. Homeland Security Secretary Michael Chertoff and Lanny Davis, former special counsel to President Bill Clinton, according to a Wall Street Journal report published on February 21. Mr. Chertoff served as national security adviser to Hillary Clinton when she served as secretary of state.

President Donald Trump’s former election campaign chief, Paul Manafort, is also a business associate of Mr. Firtash. The two embarked on an $885 million property development project in 2008 at New York’s Drake Hotel in 2008, according to U.S. court documents and media reports, including Bloomberg.

Both Mr. Firtash and Mr. Manafort deny the allegations. Mr. Manafort, who was instrumental in getting Mr. Yanukovych elected as president in 2010, quit his campaign post for Mr. Trump when his business dealings with Russia-aligned Ukrainians emerged.

Causes dear to the Ukrainian diaspora were also on Mr. Firtash’s agenda.

He founded a Ukrainian studies and grant program at the prestigious Cambridge University in the United Kingdom for about $10 million. He also generously helped fund the Ukrainian Catholic University in Lviv by helping it build and expand campuses in that western Ukrainian city.

Mr. Firtash also pledged $2.5 million for the Holodomor Memorial in Washington, according to an October 8, 2013, news release from the Ukrainian Congress Committee of America.

Mr. Firtash is known in the U.K. for having connections with senior British parliamentarians, including former Secretary of State for Culture, Media and Sport John Whittingdale and Lord Risby (Richard Spring) through his backing of the British Ukrainian Society, a parliamentary organization, according to a Financial Times report.

He cultivated these connections through British citizen Robert Shetler-Jones, whom he has known since the 1990s. Mr. Shetler-Jones headed the oligarch’s parent company, Group DF, and is still on the company’s supervisory board together with Lord Oxford (Raymond Asquith), who once headed MI6’s Moscow station and helped exfiltrate former KGB officer-turned British secret agent Oleg Gordievsky in the 1980s.