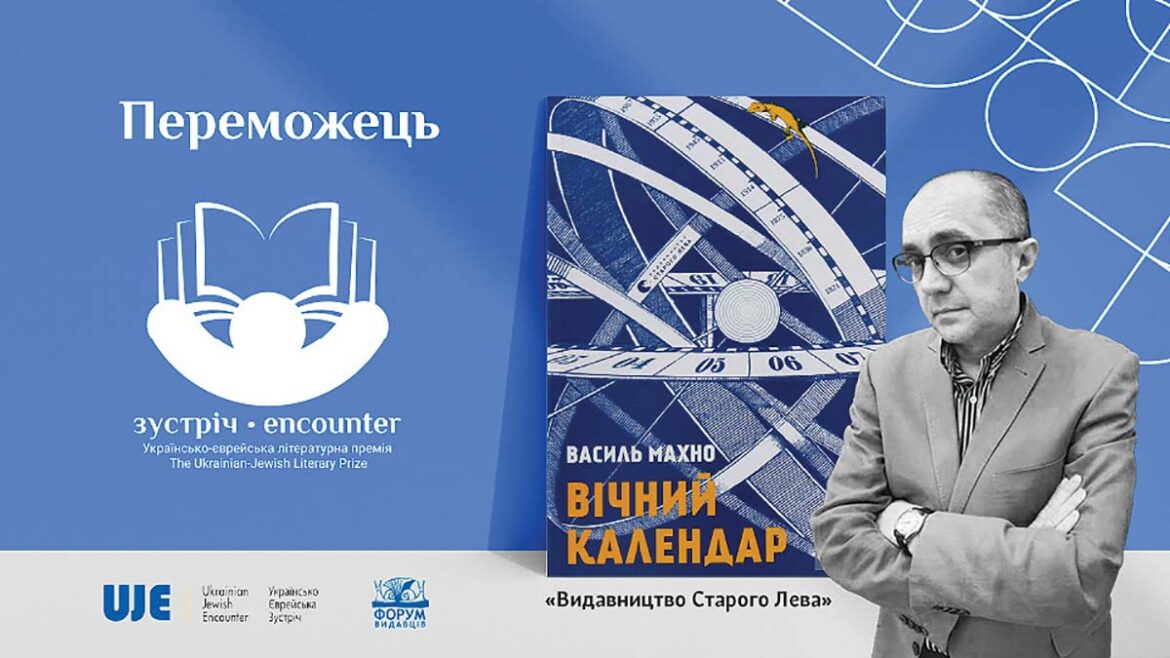 Vasyl Makhno, the first laureate of the Encounter prize, who was recognized for his novel “Eternal Calendar.” The prize is sponsored by the Ukrainian Jewish Encounter (Canada), with the support of the NGO Publishers Forum (Lviv).

Mr. Makhno was named the winner during the opening ceremony of the 27th Lviv International BookForum on September 16. His book is a panoramic narrative about the lives of Ukrainians, Poles, Jews and Armenians from the 17th century to the present day.

“Vasyl Makhno’s novel ‘Eternal Calendar’ still encompasses me. The novel is great and majestic, like both the whole planet and the separate Tower of Babel, in which people who have lost a common language try to understand each other with their eyes and deeds,” said internationally best-selling writer Andrey Kurkov, who headed the international jury that included the Ukrainian writer and literary critic Hanna Uliura and the Canadian academic and writer Myroslav Shkandrij.

“The harsh and bright world described by the writer amazes the imagination and immerses the reader in the history of Ukrainian lands and in the history of its strange and sometimes mystical connections with the world around it. From country to country, from person to person, from ancient times to less ancient times, threads stretch like blood vessels through which circulates what makes life go on – love. The author’s love for his characters, even if they do not always deserve it, the author’s love for history and its mysteries, the author’s love for his reader, for whom this incredible literary work was created, so rich in details and characters, thoughts and discoveries, myths and truth,” Mr. Kurkov commented.

Mr. Makhno is a Ukrainian poet, essayist and translator, member of the Ukrainian PEN Club and program director of the Shevchenko Scientific Society (U.S.A.), who has lived in New York for two decades. His poems and essays have been translated into 25 languages. He is the winner of several awards, including the literary prize of the Lesia and Petro Kovaliv Bequest (2009), the International Morava Poetry Prize (2013) and BBC Book of the Year (2015, Ukraine). In preparation for the novel “Eternal Calendar,” he participated in the Agnon Literary Residence in Buchach, Ukraine.

Founded in 2020, Encounter: The Ukrainian-Jewish Literary Prize will be awarded annually to the most influential work in literature and nonfiction (in alternate years) that fosters Ukrainian-Jewish understanding, helping solidify Ukraine’s place as a multi-ethnic society and giving truth to the motto, “Our stories are incomplete without each other.”

The prize money is divided between the author and publisher: the author will receive 4,000 Euros and the publisher 2,000 Euros. Four incentive awards of 250 Euros each will be awarded to shortlisted authors.

Natalia A. Feduschak, communications director for the Ukrainian Jewish Encounter, welcomed Mr. Makhno with his winning entry and said the organization hopes “the Encounter prize will encourage a wider range of authors to study these experiences and acknowledge those who have already begun to delve into various aspects of Ukrainian-Jewish relations. I sincerely hope the Encounter prize will encourage all of us to appreciate the complex and fascinating story of Ukrainians and Jews.”

In 2020, 17 Ukrainian publishers submitted 27 competition applications. The long list featured 12 books, five of which ended up on the short list.

Andriy Pavlyshyn, historian, translator and coordinator of UJE’s programs at the Lviv BookForum, said submissions in the prize’s first year included superb texts by talented authors. All are worthy of celebration, are sure to succeed and to grab readers’ attention. Next year, books in the nonfiction category will be reviewed.

“I hope our book award will allow those who are interested in Ukrainian-Jewish relations and their description in literature and nonfiction, to better orient themselves in the proposals, to attract the attention of those who have been looking for quality and important texts on this issue, and to encourage writers and publishers to achieve new accomplishments. I have high hopes that the wonderful tradition of the Encounter book award will be long and authoritative,” Mr. Pavlyshyn said.

The following books were shortlisted for the 2020 Encounter prize: