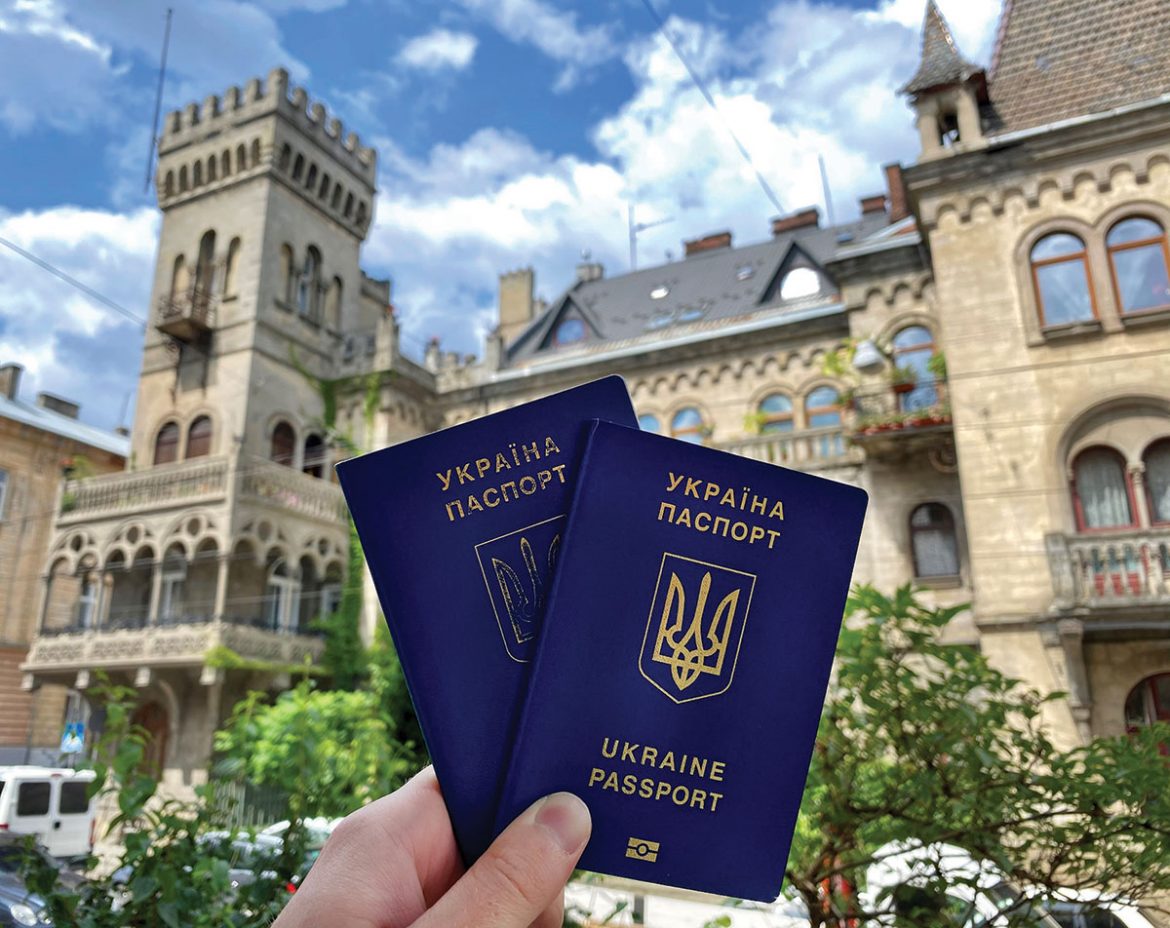 Passports used by The Weekly’s correspondent to enter the European Union.

BRUSSELS – The Council of the European Union announced on July 15 that Ukraine has been added to its list of countries it believes no longer require certain travel restrictions. Member states of the EU use those recommendations to decide whether to impose COVID-19-related travel restrictions.

Despite an agreement by which Ukrainians can enter European Union countries without needing a visa, entry from Ukraine to the EU had previously been restricted since March 2020 due to the coronavirus pandemic.

“Following a review in line with the recommendation to phase out temporary restrictions on non-essential travel to the EU, the EU Council has updated the list of countries for which travel restrictions should be lifted. In particular, Rwanda and Thailand have been removed, and Ukraine has been added [to this list],” the press service of the Council of the European Union reported on July 15.

Based on the criteria and conditions set out in the recommendation, member states can gradually remove restrictions on travel at external borders for residents of the listed countries, including Ukraine. In total, the EU’s “green list” includes 23 countries for which it recommends that entry restrictions be lifted.

The EU council’s recommendation does not automatically give people from Ukraine permission to enter EU countries, and member states can still impose their own entry restrictions.

“These are new opportunities for Ukrainians to travel this summer and this is an important signal to countries that the incidence of COVID-19 in Ukraine has significantly decreased and our state is responding appropriately to the challenges of the pandemic,” Mr. Kuleba said.

Most European countries allow non-essential entry for Ukrainians who have received a full dose of an EU-approved COVID-19 vaccine. The EU list of approved vaccines does not include the CoronaVac vaccine produced by Chinese manufacturer Sinovac, which is widely distributed in Ukraine. As a result, many Ukrainians cannot enter the EU. They are, therefore, likely to wait for vaccines produced by Pfizer or Moderna, which are approved by EU member states.

Ukraine’s Health Minister, Viktor Lyashko, said that the World Health Organization has approved the use of all vaccines offered in the country and he urged Ukrainians not to choose between vaccines because “the best vaccine is the one that has been introduced into the body and is already working.”

Mr. Lyashko said that he believes the European Union will soon allow people who have been given the CoronaVac vaccine to enter the EU.

“I have communicated with the European Regional Director of the WHO office and colleagues in the European Commission. Soon, the EMA [the EU regulator of medications] will add CoronaVac to its list of approved vaccines,” Mr. Lyashko said.

However, Albania, Northern Macedonia and Montenegro do not require a test and allow entry from Ukraine without COVID-19-related documentation.

A correspondent for The Weekly entered Spain a week before the EU moved Ukraine to its “green” list. Together with an online form required by the Spanish government, a vaccination certificate was all this correspondent needed to board a flight from Kyiv to Barcelona.

Despite different entry requirements, Ukrainians can enter one EU country and cross borders to another country regardless of travel restrictions in the country of entry. The Weekly’s correspondent crossed borders between Spain and France, France and Belgium, Belgium and Germany without a single document check. Direct access to France from Ukraine was possible only under limited conditions, and Belgium prohibited all Ukrainians from direct entry.

Meanwhile, on July 21 Ukraine began a new phase in its effort to vaccinate its population of some 41 million people. Now all categories of citizens, regardless of age and profession, are eligible to receive a vaccine.

“Groups such as doctors, educators, social workers, the military, the elderly and people with concurrent illnesses remain a priority for the government,” said Ukrainian Prime Minister Denys Shmyhal during a meeting of the government.

People in those groups remain a priority “because they are in the zone of highest risk and most vulnerable to COVID-19. They will continue to be given priority in immunization,” Mr. Shmyhal said.

The prime minister noted that, to date, almost 4.3 million vaccinations have been administered in Ukraine. Nearly 2.8 million Ukrainians have received their first shot of vaccine, and 1.5 million have received their second dose. Ukraine has planned to deliver 13 million doses of the vaccine by the end of the summer, according to the government.

The National Academy of Sciences recently published a report noting that, while the number of cases of COVID-19 has declined in Ukraine, there is a danger of an “explosive rate” of further growth as a result of new strains that are now prevalent in other parts of the world.

“It is worrying that three key epidemic indicators have risen in the last week, which we believe reflect current epidemic dynamics: the number of positive PCR tests, new hospitalizations and new reported cases,” National Academy of Sciences of Ukraine said in their report.