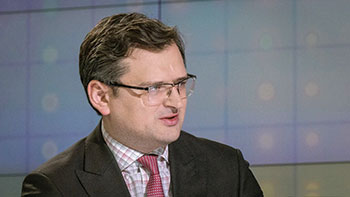 European Union leaders gathered in Brussels on June 24 for a two-day summit during which they were scheduled to discuss a new strategy to manage relations with Russia amid signs of a split with some members pushing for a meeting with President Vladimir Putin, and others opposed given their deep-seated distrust of Russia’s head of state.

Envoys for France and Germany put forward a last-minute proposal to hold a summit with Mr. Putin as a possible way to repair ties that the bloc said are in a “negative spiral.”
But some EU diplomats said there should be an improvement in relations before any summit with the Russian leader, and numerous EU nations – particularly in Eastern Europe – are wary of talking to the Kremlin.

The EU and Russia are on opposing sides of several issues from matters involving Ukraine and Belarus to human rights. They also accuse each other of meddling in elections, spreading disinformation and threatening security and stability in Eastern Europe.

French President Emmanuel Macron said that a dialogue with Russia “is necessary for the stability of the European continent, but it will be demanding because we will not give up any of our values.”

“We cannot stay in a purely reactive logic when it comes to Russia,” he said as he arrived for the EU summit.

“Without any positive changes in Russia’s behavior, if we start to engage, it’ll send a very bad signal to our partners,” Mr. Nauseda told reporters in Brussels, referring to countries such as Ukraine and Georgia, two former Soviet republics with very tense ties with Moscow.

The Kremlin said that Mr. Putin “is a supporter of creating mechanisms for dialogue and contacts between Brussels and Moscow.”

“Such a dialogue is truly needed both by Brussels and Moscow,” spokesman Dmitry Peskov told reporters in Moscow.

Ukraine, which is preparing to formally apply for EU membership in 2024 with an eye on joining the bloc in the 2030s, blasted the proposed restarting of summits with Russia.
Speaking after meeting with EU foreign policy chief Josep Borrell in Brussels, Ukraine’s foreign affairs minister criticized the proposal.

“Initiatives to resume EU summits with Russia without seeing any progress from the Russian side will be a dangerous deviation from EU sanctions policy,” Dmytro Kuleba warned.

The EU, the United States, and other countries have imposed sanctions on Russia after Moscow annexed Ukraine’s Crimean Peninsula in 2014 and threw its support behind Russia-backed separatists in eastern Ukraine in a conflict that has killed more than 13,200 people.

EU leaders hope to build on a strategy paper released earlier this month by the European Commission and the EU’s diplomatic service that warned of the “negative spiral” and “a further downturn” in ties.

A draft of the summit conclusions, obtained by RFE/RL on June 24, said the leaders agree that the EU remains open “to a selective engagement with Russia in areas of EU interest,” but that Russia must do more to ensure fundamental human rights for its citizens.

“The European Council condemns the limitations on fundamental freedoms in Russia and the shrinking space for civil society,” the draft says.

“It stresses the need for people-to-people contacts and continued EU support to Russian civil society, human rights organizations and independent media,” it adds.

The EU also published details of economic sanctions against Belarus over the diversion of a commercial flight to Minsk on May 23 to arrest a dissident journalist and his girlfriend.
The draft summit conclusions reiterate the bloc’s calls for the immediate release of all political prisoners and arbitrarily detained persons in Belarus, including Raman Pratasevich and Sofia Sapega, and “for an end to repression of civil society and independent media.”

The EU “reiterates the democratic right of the Belarusian people to elect their president through new, free and fair elections,” the draft says.

Additional reporting for this story was provided by RFE/RL’s Rikard Jowziak, Reuters, and AFP.