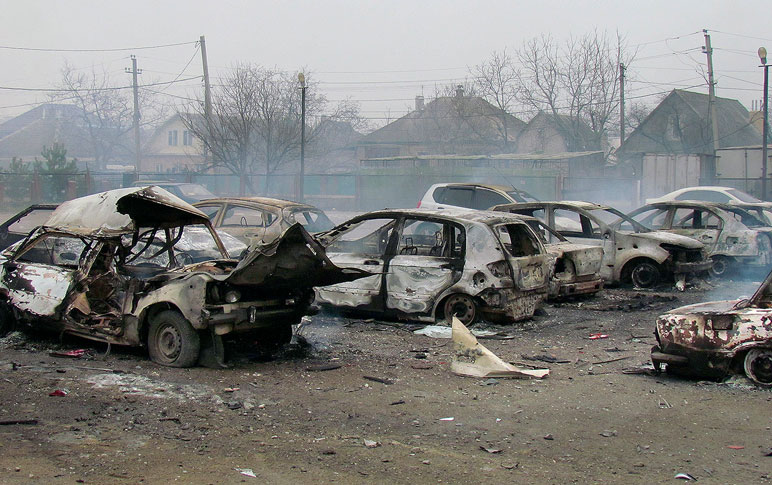 The result of rockets fired by forces of the Donetsk People’s Republic into residential areas of Mariupol on January 24; 31 residents were killed and over 100 were injured.

KYIV – European leaders decided this week to pursue extending existing sanctions against Russian politicians and enterprises, and to consider a new round after the deadliest attack on civilians in Ukraine thus far that occurred in the city of Mariupol on January 24.

The European Union’s Foreign Ministers Council voted on January 29 to recommend extending Crimea-related sanctions until September and imposing new economic sanctions. The day before, the Parliamentary Assembly of the Council of Europe (PACE) voted to extend sanctions restricting Russian activity in the organization until the end of April.

The measures were welcomed by Ukraine’s Foreign Affairs Ministry and its PACE delegation, which fiercely lobbied for them amid intense Russian efforts to lift them. Yet, the Europeans have begun to reveal doubts about their sanctions approach, which so far has only restrained, not deterred, Russia’s military aggression and terrorism in Ukraine.

“If new sanctions helped us to resolve the crisis, then I would be in favor of further sanctions. However, I doubt that the crisis can be resolved with new sanctions,” European Parliament President Martin Schultz said in a January 28 interview with an Austrian television network.

“We need to try to resolve the crisis by means of combining sanctions with dialogue, otherwise we will end up under threat of a more serious military conflict,” he added.

The consideration of new sanctions was prompted by the January 24 morning terrorist attack by pro-Russian forces on a residential neighborhood of Mariupol, a key port city in the Donetsk Oblast that remains under Ukrainian government control. As a result, 31 residents were killed and more than 100 were injured.

The attack was condemned by the January 28 PACE resolution and the January 29 EU Foreign Ministers Council recommendations, which both cited the direct responsibility of the Russian government. It was also condemned by U.S. Secretary of State John Kerry, who also blamed the Kremlin for the Mariupol violence.

Their claim of Russian involvement was confirmed by audio-recordings released on the day of the attack by the Security Service of Ukraine (SBU), which proved that pro-Russian terrorists aimed to inflict damage on a residential area.

The SBU also confirmed that a Russian citizen was among the attackers, as well as members of the entourage of Aleksandr Zakharchenko, the self-proclaimed leader of the Donetsk People’s Republic.

U.S. Vice-President Joe Biden called Ukrainian President Petro Poroshenko the day after the attack and vowed to increase international pressure on the Russians.

Yet Western governments are even beginning to turn cold on the Ukrainian government, in the view of Stepan Havrysh, the former first vice-chair of the National Security and Defense Council.

“During the last six months, Poroshenko hasn’t had direct consultations on handling the situation in Donbas with Western leaders, other than telephone conversations,” he told gazeta.ua in comments on January 28. “We haven’t become an ally to the U.S. because it sees the two-faced politics of the Ukrainian government, which is playing several hands. In that regard, the U.S. ambassador to Ukraine noted that while we’re taking losses, you’re gaining benefits. Poroshenko’s business in Russia, the oligarchs that surround him, dependence on the Russian economy, the expectation of expanding such business – all this doesn’t support building the state.”

Even if the EU Foreign Ministers Council approves its recommendations to extend sanctions at its January 29 meeting, the earliest they can be implemented is late March.

That’s because the EU leaders would first have to decide at their February 12 summit to assign the European Commission with the task of preparing the necessary measures, which takes up to six weeks, reported the Reuters news agency.

“Russian President Putin is not capable of any dialogue. He understands only force and rejects everything else,” he said. “He’s a typical representative of the KGB and he uses dialogue only to recruit his interlocutors. European leaders don’t want to see the truth that a new global threat has emerged in the world, which demands an adequate response. Yet European leaders are hiding their heads in the sand.”

Russian Foreign Affairs Minister Sergei Lavrov even stated very bluntly in a January 28 article published on the ministry’s website that Western unilateral sanctions “won’t force us to back down from what we believe to be right and just.”

As her unique proposal, German Chancellor Angela Merkel said at the World Economic Forum in Davos she is considering proposing the creation of a single free trade zone between the European Union and Russia to end the aggression in Ukraine, Deutsche Presse-Agentur reported on January 23. “This really should be our goal. I hope this opportunity emerges,” she said, adding that the precondition must be establishing a ceasefire in Ukraine.

Yet, in the view of Mr. Losyev, such concessions are dangerous and misread Mr. Putin’s true intentions. “The West doesn’t understand Russia and naively thinks it can create a civilized democratic country,” he said. “Russia has a powerful anti-Western foundation and is incompatible with Western values. It’s aiming for global hegemony, and its goal is to kick the U.S. out of Europe, destroy Euro-Atlantic solidarity and make Europe its protectorate.”

As of The Weekly’s January 29 press deadline, the EU Foreign Ministers Council had yet to disclose the recommendations reached at their meeting. But a draft of conclusions to be reached was leaked in the days leading up to the meeting to the Reuters news agency and the EUObserver news site.

The council will vote to recommend extending sanctions related to the annexation of Crimea against Russian individuals and organizations for six months until September, as well as add more Russian citizens to its sanctions list.

The conclusions also accuse Russia of playing a role in the January 24 rocket attack on civilians in Mariupol. They call upon the European Service of Foreign Action and the European Commission to continue preparing more restrictive economic measures, reported the EUObserver.

These measures may involve capital markets restrictions that reduce the maximum term for repaying the loans of Western institutions and investors, making it hard for Russian companies to refinance themselves and affecting Russian sovereign obligations, reported Reuters. They may also restrict access to oil and natural gas extraction technologies.

What made bigger headlines, roiling the Russians in the process, was the January 28 PACE resolution and amendments approved in Strasbourg, led by an extension of sanctions that deprive its Russian members of their voting rights until an April review.

“That’s the amendment to the resolution for which the main war was fought during the entire winter session,” Ukrainian National Deputy Svitlana Zalishchuk reported on her Facebook page. “Also Russia didn’t regain the right to participate in the governing bodies of the Council of Europe.”

Should Russia “not demonstrate tangible progress,” its members could face being deprived of their votes until the year end or removed altogether, the Yevropeyska Pravda news site reported.

The resolution – which drew 160 votes in favor and 42 against – prevents the Russian PACE members from participating in election observing missions, serving as rapporteurs and being appointed as PACE representatives until the end of 2015.

It also calls for an assessment at the next session’s opening in April of what Russia has done to de-escalate the conflicts in Ukraine, Georgia and the Transdniester region in Moldova, including removing its soldiers from these regions, the news site said.

The resolution calls for the Russian government to arrange for the release of Ukrainian war prisoner of war Nadiya Savchenko during the next 24 hours to the Ukrainian government or a third party, said Ms. Zalishchuk, a member of the Ukrainian delegation in Strasbourg. It condemns Russia’s role in instigating and escalating the military conflict in eastern Ukraine, including supplying arms to separatist fighters and concealing the involvement of Russian armies.

It condemned Russia’s role in the Mariupol attack on civilians on January 24. The resolution cites Russia’s failure to uphold the Minsk ceasefire accords and calls for the Russian government to uphold them, including removing Russian soldiers from Ukrainian territory. It calls upon Russia to cancel the annexation of Crimea and cease the ethnic persecution of Crimean Tatars.

Most of the approved amendments were approved at a “very heated” meeting of the monitoring committee that day, Ms. Zalishchuk told The Ukrainian Weekly. Just a day earlier, the same committee approved a draft resolution removing the sanctions on Russia, granting its members the right to vote at PACE sessions, participate in governing PACE bodies and vote in the sessions of the leading committees.

However, Ukrainian diplomats were able to sway the committee towards supporting amendments reflecting an opposite position, Ms. Zalishchuk said, crediting the success to the Ukrainian Foreign Affairs Ministry, Verkhovna Rada Chair Volodymyr Hroisman and fellow PACE delegates from the Ukrainian Parliament.

In response to the January 28 PACE vote to extend sanctions, the Russian delegation will cease its participation in PACE, as well as any contact, until the year end, Aleskei Pushkov, the head of the Russian Duma’s Foreign Affairs Committee, told reporters afterwards in Strasbourg, as reported by the Yevropeyska Pravda news site.

The Russian government is seriously considering leaving the Council of Europe and ceasing its participation in the European Human Rights Convention and other Council of Europe institutions. “I wish to stress that Russia had never considered such a possibility,” Mr. Pushkov said. “Today’s PACE decision puts this issue on the daily agenda.”

With that, Russia has removed any limitations any international institution can place upon it, with the exception of the United Nations, where it has a significant voice, observers said.

“At the moment, Ukraine can count on the support of the U.S., Canada, Great Britain and Poland,” said Andrii Zolotariov, the director of the Third Sector analytical center in Kyiv. “It needs to orient itself towards them, since the political position of these countries is benevolent towards us. But waiting on the EU can drag on into infinity.”