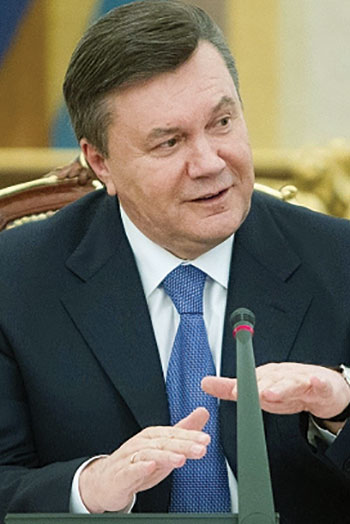 KYIV – Kyiv’s Obolon District Court on January 24 sentenced ex-President Viktor Yanukovych, in absentia, to 13 years in prison on charges of treason and for abetting Russia’s war against Ukraine.

A panel of three judges took turns reading the verdict for seven hours starting at 9 a.m. that related to five criminal counts. Insufficient evidence was found to convict the exiled former president of “encroaching” on the country’s “territorial integrity, which caused the death of people or other grave consequences.”

A signed letter dated March 1, 2014, that Mr. Yanukovych, 68, allegedly sent to Russian President Vladimir Putin asking him to send troops to Ukraine to “restore law and order” in the wake of the Euro-Maidan revolution in February 2014 was the prosecutors’ key piece of evidence.

Russia’s United Nations ambassador at the time, the late Vitaliy Churkin, read the purported letter during the international body’s March 3, 2014, extraordinary session in New York. The Kremlin and Mr. Yanukovych later disputed the contents of the letter. (The letter can be seen here: https://assets.documentcloud.org/documents/ 5692734/Lyst-Yanukovycha-Putinu.pdf?fbclid=IwAR2KbDS3fsjqXp6Rtafg A45kVsI1UzMxK0YBpSEW1Qll1S 6uD9rGGpOUqTk.) Mr. Churkin died in February 2017.

Mr. Yanukovych has denied all the charges against him and maintains power was illegally seized from him after the popular uprising. In statements he subsequently made in news conferences in Russia and through his lawyers during the trial, he said he “temporarily” fled Ukraine due to personal safety concerns.

Hiding in Moscow, Mr. Yanukovych never issued a final argument through a video connection due to alleged health reasons and a judge’s denial of yet another motion for an extension. He had been granted an extension until December 5, 2018, after he allegedly suffered back trauma on November 18. The presiding judges afterwards found the medical certificates he submitted unconvincing and moved ahead with the trial.

Prosecutors say they had 19 volumes of evidence and 37 plaintiff witness testimonies, and included 15 testimonies on the defense side, Prosecutor General Yuriy Lutsenko wrote on Facebook on the day of the verdict.

“The cost of Yanukovych’s betrayal” that led to Russia’s annexation of Ukraine’s Crimean peninsula and war in the Donbas resulted in “30,000 wounded [people],” he said, citing a January 21 U.N. report. “About 13,000 people have been killed, of whom 3,300 are civilians, 4,000 Ukrainian armed forces servicemen, and 5,500 Russian-backed fighters,” he noted.

The trial lasted for a year and a half, having started on May 24, 2017, and encompassed 89 court hearings.

Mr. Yanukovych is free to travel after Interpol, the closest to a world police body, removed him from its wanted persons list on July 3, 2015.

Russia is unlikely to give up the former president and Donetsk Oblast native whom it harbors to Ukraine. Moscow isn’t part of the European Convention on the International Validity of Criminal Judgements.

Prosecutors have yet to send another case involving Mr. Yanukovych to courts. It concerns him allegedly organizing the mass killings of Euro-Maidan protesters on February 18-21, 2014, the period during which most of the approximately 100 demonstrators killed were fatally shot.

Ukrayinska Pravda reported that Mr. Yanukovych’s lawyers Oleksandr Horoshynsky and Oleksandr Baidyk said after hearing the Obolon court’s verdict that they will appeal. Mr. Horoshynsky commented: “The announcement of the verdict at this stage is a PR move and a pre-election maneuver by interested persons.”