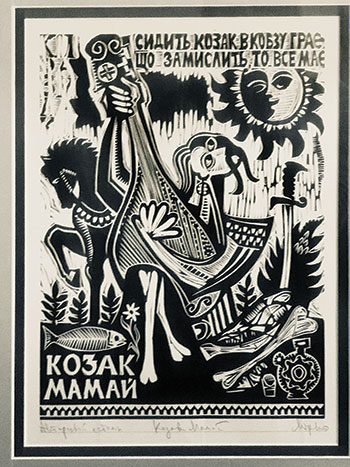 ROCHESTER, N.Y. – An exhibit at the Flower City Arts Center in Rochester, N.Y., on December 8-30, 2017, featured the prints of Wolodymyr “Mirko” Pylyshenko. This solo exhibition focused on Mr. Pylyshenko’s black-and-white graphic prints made between 1958 and 1966.

The exhibit included three kinds of prints: linoleum and wood cuts, lithographs and etchings. The themes of his work encompass Ukrainian motifs, including archetypal images of Kozak Mamay, and the brothers Kyi, Shchek and Khoryv, known as the legendary founders of Kyiv. Included also in the exhibit are a self-portrait, excerpts of text by Ukrainian expressionist writer Vasyl Stefanyk and dramatic landscapes. All proceeds from prints sold at the exhibit were donated to the Flower City Arts Center and to the Rochester-Poltava Sister City program.

The exhibition opening reception on December 8 drew over 150 guests, among them members of the Ukrainian community as well as esteemed artists with whom Mr. Pylyshenko has worked over the years, including Bill Stewart, Richard Margolis, Robert Marx, Jack Wolsky and Boo Poulin. 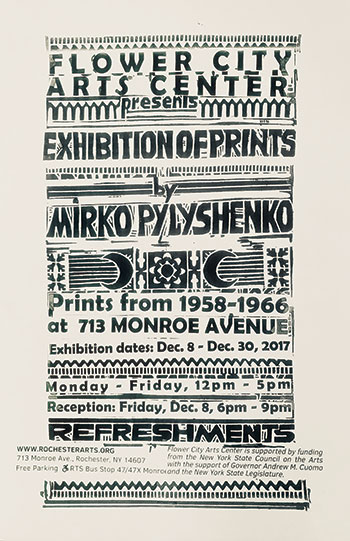 A poster for the Pylyshenko exhibit at the Flower City Arts Center.

Mr. Pylyshenko’s thematic material is culturally and politically resonant, as is his choice of form. He explains graphic print work as the poor man’s art: blocks of scrap wood and cutting utensils are easily found in most places and under most conditions. For this reason, “rizba” (woodcarvings) and prints are commonly found even in poor village settings in Ukraine. Mr. Pylyshenko first learned the craft of wood cutting as a child during his time in displaced persons camps in Germany during the latter years of World War II. He was influenced by the rich art that was created by Ukrainian refugees in these camps.

Mr. Pylyshenko may be best known in the Ukrainian community for his humanitarian work and community activism. Together with his wife, Irma Pylyshenko, professor of dance at the State University of New York (SUNY), College at Brockport, he supported the work of Ukrainian artists, scholars and dissidents, hosting them in the U.S. and assisting in the dissemination of their work during the latter years of the Cold War.

He was appointed by President Jimmy Carter to serve as an advisor to the Human Rights Committee in 1980. He founded the Professional and Business Association in Rochester, N.Y., in 1989. His current efforts are dedicated to documenting the history and vast impact of the Ukrainian diaspora. His extensive archival collection, the Ukrainian Rochester Collection, is housed and publicly available at the University of Rochester Rare Book and Archive Library. 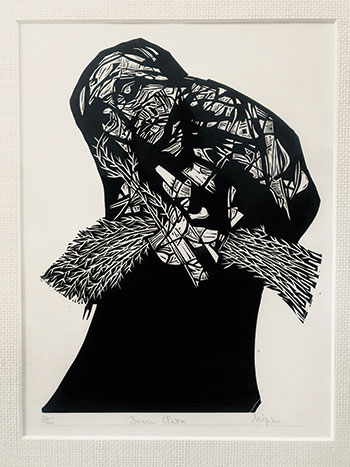 In addition to being a print artist, Mr. Pylyshenko is a sculptor and a prolific painter in the style of abstract expressionism. Wolodymyr Pylyshenko taught art at SUNY Brockport for 36 years, and served as chairman of the Department of Art and Art History for 10 years. He has also taught at the Rochester Institute of Technology, the University of Rochester, the Rochester Memorial Art Gallery, as well as the National University of Kyiv Mohyla Academy University (1996) and Moscow State University (1979).

He currently lectures at universities and colleges as archivist and historian of the Greater Rochester Ukrainian community, produces a tri-weekly Ukrainian television program, and directs the Rochester Ukrainian Credit Union Library. He was founder and president of Ukrainian National Association Branch 66.