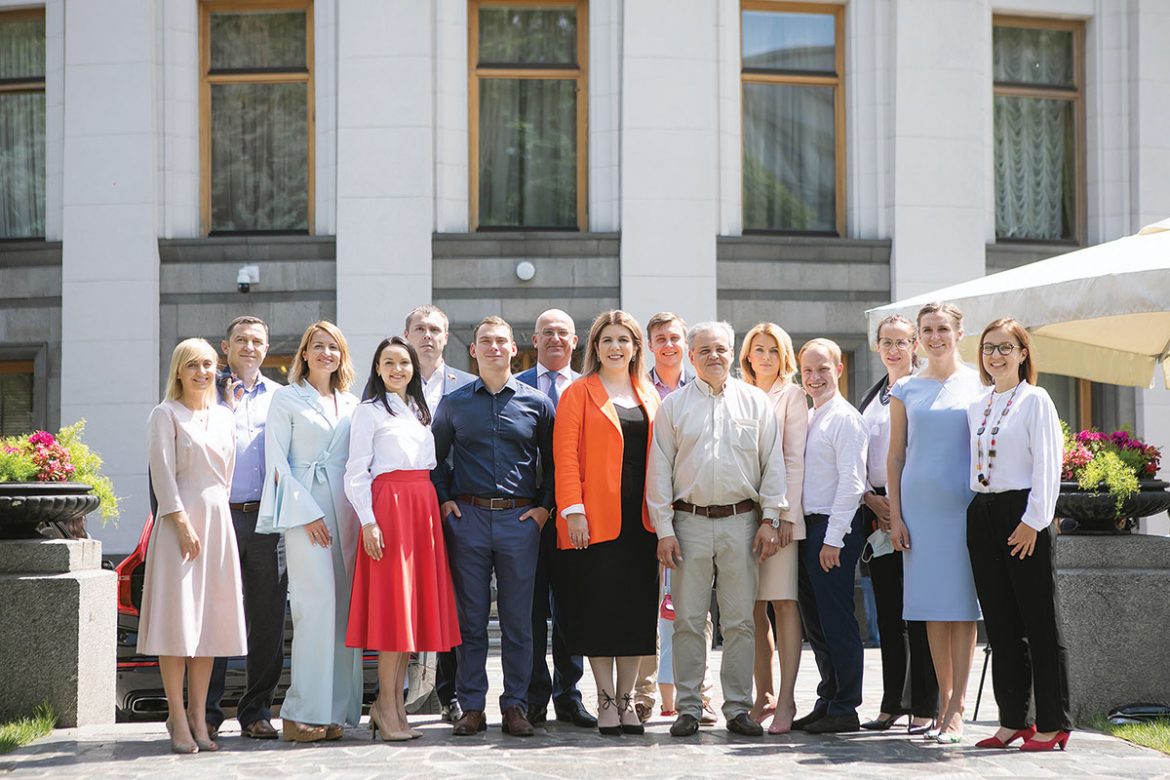 Members of the Holos faction stand in front of the Ukrainian parliament.

KYIV – In the latest step of an escalating internal political party conflict, half of Holos’s 20 members of parliament released a statement on March 29 calling for the initiation of a party congress to elect new leadership and change the party’s statute. The move came after the group’s political council warned last week that several deputies faced possible expulsion from party.

Formed by the Ukrainian rock star Svyatoslav Vakarchuk, Holos (Voice) managed to become a member of the Ukrainian parliament in July 2019, only two months after the faction was officially formed in 2019. The party now holds 20 seats out of the total 450 members of parliament, making it the smallest faction in the Rada.

Mr. Vakarchuk gave up his leadership of the party and began moving away from politics on June 11, 2020, when he announced his resignation from the Verkhovna Rada. It was the second time that the front man of the rock band Okean Elzy resigned as a national deputy. Mr. Vakarchuk’s first foray as a member of parliament was in 2007-2008.
In 2020, the party’s congress elected Kira Rudyk as the new party leader.

Ms. Rudyk said that the current internal dispute is over the party’s growth and its future direction.

“Such transformations are complicated. And this is normal,” said Ms. Rudyk, who before entering politics was a chief operating officer of the information technology startup Ring Ukraine, which was bought by Amazon for $1 billion in 2018.

“They are complicated not only in politics; they are complex in all structures that are growing and experiencing changing processes. It is normal that such a transformation is often painful for certain people who would like to have more influence,” Ms. Rudyk said, referring to the group of deputies who demanded that the party elect new leadership.
Those 10 members of Holos released a statement on March 29 that cited several issues the group has with the party’s leadership.

“We are disappointed with the refusal of the party and faction leadership to sign the resolution on the dismissal of Prosecutor General Iryna Venediktova, even though most members of the faction consider her work a failure,” the group said in their statement.
They also cited concern that the leadership of the party was not transparent about negotiations with Ukrainian President Volodymyr Zelenskyy’s Servant of the People party regarding a potential coalition with the president’s party.

“We condemn the leadership of the party and the secret negotiations on joining a coalition with the ruling party,” the statement read. “We do not see ourselves in a coalition with a political force that includes [Oleh] Tatarov [the former deputy head of the Internal Affairs Ministry’s Central Investigative Department during the Euro-Maidan protests] and [Maxym] Stepanov [Ukraine’s minister of health], and that appoints [Serhiy] Shkarlet [Ukraine’s education and science minister who is accused of plagiarism], throws political prisoners behind bars, fails to vaccinate and believes in Russia’s peaceful intentions. Such a coalition is unacceptable,” the statement said.

“After all, we are outraged by the party leadership’s violation of the principles of intra-party democracy and transparency in its activities. The last congress of the party, which took place in February 2021, due to pressure from the party leadership, was held with numerous violations and without holding conferences in territorial centers,” the statement continued.

Among the Holos members who signed the statement were Solomiya Bobrovska, Yaroslav Yurchyshyn, Andriy Sharaskin and Yulia Klymenko – four of the five Holos members who joined Mr. Vakarchuk when he announced the party’s creation on May 16, 2019.

“[Ms. Rudyk] wants to take the place of Svyatoslav Vakarchuk. She behaves very similarly to him,” said Mr. Yurchyshyn, who was once the deputy chairman of the party.
Mr. Yurchyshyn said the party’s split began last year when Ms. Rudyk replaced Mr. Vakarchuk and Serhiy Prytula was removed from the governing body of the party.

Mr. Yurchyshyn also accused Ms. Rudyk and Yaroslav Zheleznyak, Holos’s leader in the Verkhovna Rada, of unwillingness to report on the use of budget funds in the elections and of failing to organize internal communications for the party.

Mr. Yurchyshyn said he is ready to leave the political party because “they decided to make a party for themselves and others. One part knows what is going on and how the system works, and they are just trying to push away others.”

Other party members said that Ms. Rudyk brought a relatively rigid management style to the party from her corporate background.

“Instead of collective decision-making, we have a situation where everything is decided by one person – Kira Rudyk. And other deputies do not have the opportunity to influence decisions,” said Ms. Klymenko, who was number two on the party’s list behind Mr. Vakarchuk.

According to Ms. Klymenko, over the past four months, the faction has essentially split into two groups of about ten people each, with one group publicly supporting Ms. Rudyk and the others accusing her of usurping her power.

“It turns out that the faction is led by [Mr.] Zheleznyak, who can’t hear us,” Ms. Klymenko said. “And the party leadership is in the hands of Ms. Rudyk, who has gathered a loyal political council and now decides for herself what to do.”

However, both the leadership of the party and the opposition deputies have avoided talking about an end of the party.

“I do not think that this is an ideological split, frankly,” said Mr. Zheleznyak. “I do not think that any of my colleagues have changed their priorities. I see this as a standard crisis of growth of the organization.” He also expressed hope that colleagues would not put their “emotions and ambitions” above party interests and that the situation could be “resolved.”

Holos now has about 400 deputies in local councils across the country with factions in city councils in Kyiv, Lviv, Cherkasy, Rivne and other Ukrainian cities.

In the early elections to the Verkhovna Rada in 2019, Holos took fifth place in terms of the number of votes (members of the party received 851,722 votes – 5.82 percent). The party got its highest level of support in Lviv Oblast, taking 23 percent of the vote, enough for first place in the region. Among Ukrainians who live abroad but were able to vote in that election, Holos received almost 20 percent of the vote, while European Solidarity got 29.5 percent and Servant of the People received 28 percent of the vote.

Mr. Vakarchuk has not commented on the party conflict. He is neither a member of parliament nor in the party’s leadership, though he remains a Holos party member.