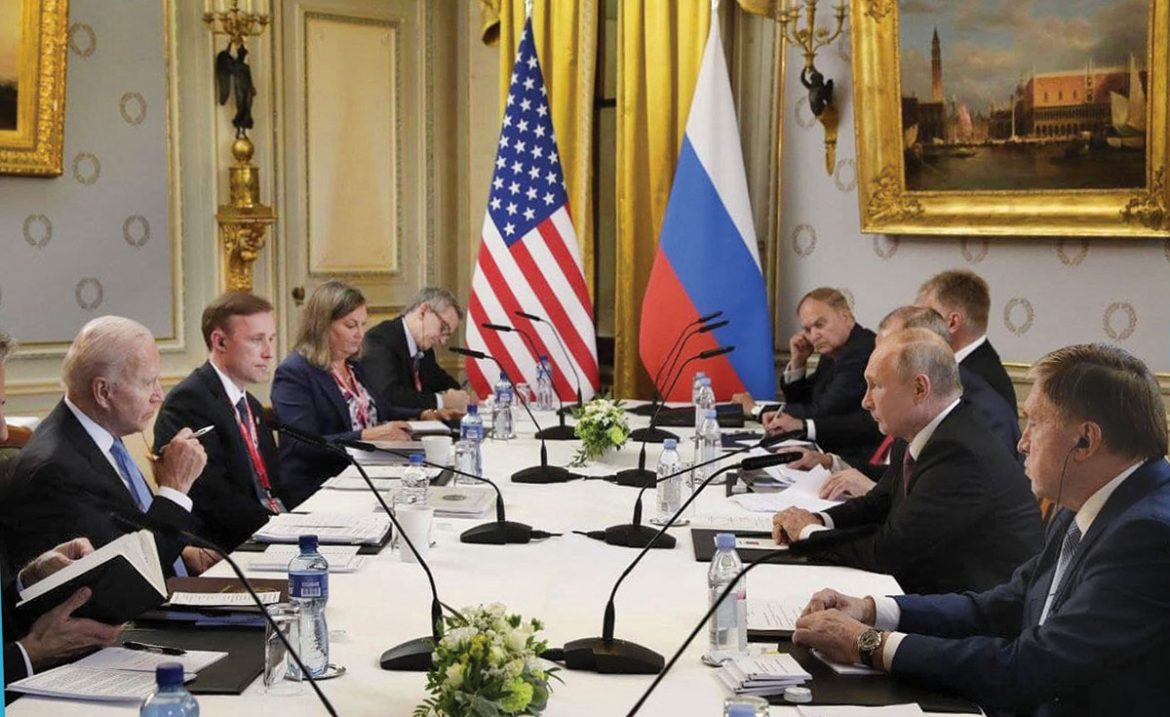 Ukraine becoming a member of NATO would be a “red line” for Russia, the Kremlin has said after U.S. President Joe Biden and Russian President Vladimir Putin held their first summit in Geneva on June 16.

Kremlin spokesman Dmitry Peskov said on June 17 that Russia was concerned by talk that Kyiv may one day be granted a NATO Membership Action Plan, a first step toward membership in the Western alliance.

Ukrainian President Volodymyr Zelens­kyy said on June 14 that he wanted a clear “yes” or “no” from Mr. Biden on giving Ukraine a plan to join NATO.

The United States has provided more than $2.5 billion in security assistance to Ukraine since 2014, when Russia forcibly seized Ukraine’s Crimean Peninsula and backed separatists in the east, sparking a war that has killed more than 13,000 people.

But Mr. Biden said Kyiv needed to root out rampant corruption and meet other criteria before it could join.

Tensions between Russia and Ukraine have risen in recent months after the two countries blamed each other for an increase in fighting in eastern Ukraine amid stalled peace talks between Kyiv and Kremlin-backed separatists.

Russia also amassed 100,000 troops on its western border with Ukraine and in Crimea, drawing Western condemnation and concern for what Moscow said was just a defensive exercise.

Although Russia later announced a pullback, both Washington and Ukraine say that the withdrawal is not complete.

In a Skype interview from Brussels on June 17, U.S. Under Secretary of State for Political Affairs Victoria Nuland told RFE/RL’s Ukrainian Service that the “swift reaction” of the United States and “all of our allies and partners in Europe” to Russia’s military buildup showed that Moscow “confronts a united front of democratic nations demanding civilized behavior vis-a-vis Ukraine.”

“And that gives us a certain strength,” Ms. Nuland said.

She reiterated that the United States is “firmly committed” to the “sovereignty, independence and territorial integrity of Ukraine,” and said the U.S. sanctions imposed over Moscow’s actions in the country “are going to stay in place unless and until Russia changes its behavior towards Ukraine.”

“This is something we are watching very closely and this really is a red line for us – as regards the prospect of Ukraine joining NATO,” Mr. Putin’s spokesman said.

“Of course, this [the question of a membership plan for Ukraine] raises our concerns.”
However, Mr. Peskov said the summit between Messrs. Putin and Biden was a meeting “with a plus sign.”

“From the very beginning, we warned against exaggerated expectations in connection with this summit,” Mr. Peskov told Ekho Moskvy. “But now we can say, primarily based on the assessment by the president himself, that it was more with a plus sign.”

Mr. Putin later said in televised remarks that Russia was “ready to continue this dialogue” provided Washington was also willing to do so.

Messrs. Biden and Putin agreed at the summit to regular talks to try to lay the groundwork for future arms-control agreements and risk reduction measures.

However, there are still differences between the two states, Mr. Peskov said.

Following an agreement during the summit between the two presidents to return their ambassadors to their posts in a bid to lower tensions, the Russian Foreign Affairs Ministry said the Russian ambassador to the United States would resume his duties in Washington next week.

Ambassador Anatoly Antonov was recalled from Washington about three months ago, after Mr. Biden said in an interview that he believed Mr. Putin was a killer.

“We opened a couple of channels where we are going to test whether this cooperation will be fruitful, particularly in the area of strategic stability – looking at weapon systems that are destabilizing and how we might work on those as well as the issue of cybersecurity and ransomware,” Ms. Nuland told RFE/RL.

“So, we’ve set up a couple of experts groups now and we will test whether Russia wants a predictable and stable relationship, [and] whether we can make some agreements on these things,” Ms. Nuland said.

She added that, “there is a lot of questioning whether Russia is ready for this kind of relationship with us, whether it will commit to trying to improve things.”

“But President [Biden] is committed to trying, but also profoundly clear that he will protect the American people and he will protect our allies and friends,” she added. (With reporting by Reuters, dpa, TASS, AFP and RFE/RL’s Ukrainian Service)