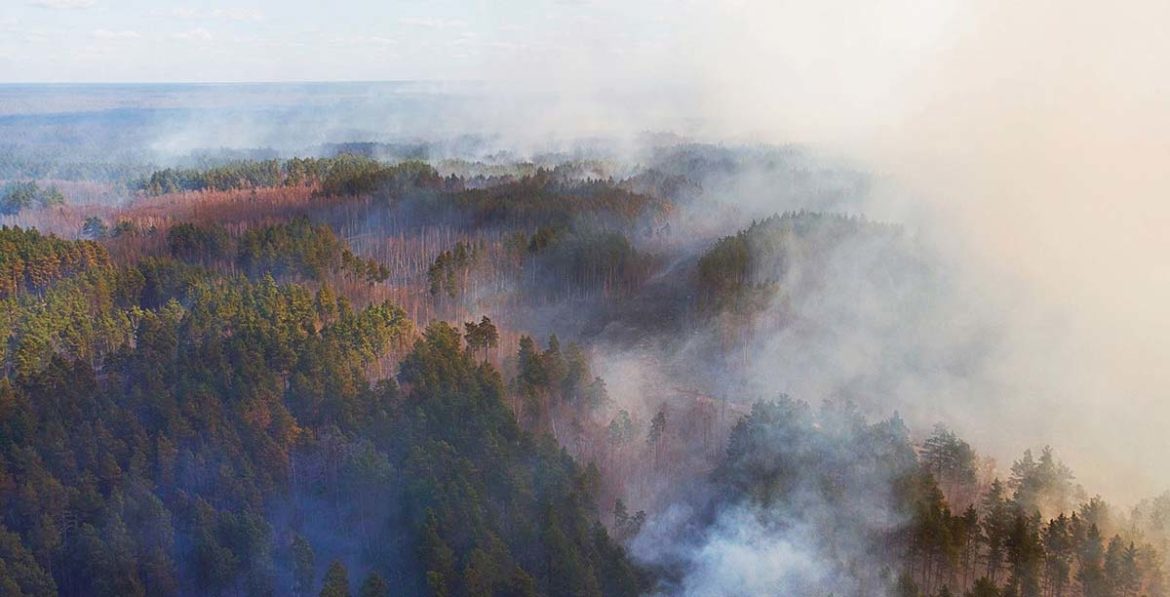 Fires in the Zhytomyr region are one of the main reasons for Kyiv’s air pollution.

KYIV – Ukraine’s capital topped the live Air Quality and Pollution City Ranking on April 16 and 17, as the city with the dirtiest air in the world. Its Air Quality Index (AQI) was the highest for those two days at 380. Two Chinese cities followed Kyiv – Shenyang with 180 and Chengdu with 171.

The Kyiv City State Administration explained the phenomenon by citing wildfires in the Zhytomyr region and forest fires in the Chornobyl Exclusion Zone, as well as northwest wind gusts. “The radiation background is within the norm,” local authorities assured the public. However, they called on residents of Kyiv to limit time spent outdoors, keep windows closed (especially at night and early in the morning), use air conditioning equipment and air purifiers, and drink up to three liters of water a day. Earlier, the city and surrounding areas suffered a dust and sand storm.

The dust storm was caused by climate change, according to the Ukrainian Hydrometeorological Center. A snowless winter and lack of normal rainfall resulted in aerial erosion of soils and reduced groundwater levels, which caused the dust that was brought by a northwest wind to the capital.

“Due to bad weather, on the Kyiv-Kovel-Yagodin highway, 55 kilometers from Kyiv, there was a serious road accident that involved six cars,” stated the National Police. The accident resulted in four deaths and some injuries. The cause of the accident was lack of visibility due to the dust storm.

The air-pollution problem was so visible that it rapidly became the most-discussed topic in the Ukrainian media.

President Volodymyr Zelenskyy began an address to the nation about the coronavirus situtation not with the main issue, but with a message about the fire in the Exclusion Zone’s forest. “Six points of fire outbreak were eliminated. There is no threat to the nuclear power plant, spent fuel storage and other critical facilities,” he reported. “As of now, there is no open fire in the Exclusion Zone. The National Police have already detained the people who caused the fire, and they will bear strict responsibility for all their actions,” said Mr. Zelenskyy.

“I urge all citizens not to panic. We remember the lessons of April 26, 1986 [the day of Chornobyl nuclear disaster]. And no one will hide the truth from you,” the president said in his address. “The truth is that the situation is controlled there. Background radiation in the capital and the Kyiv region is within normal limits. Of course, we note the assistance of the weather. But we have no right to forget about people who have been fighting the fire for 10 days: 1,500 of our rescuers and 110 vehicles, including planes and helicopters, were involved in extinguishing the fire in the Exclusion Zone,” he noted.

The president thanked firefighters and rescuers for the courageous fulfillment of their duty and underlined that they have been risking their lives because of the thoughtless actions of individuals. “I strongly advise anyone who has not yet understood why you cannot burn grass to see photos from the scene of the fire. To see the exhausted faces of the firefighters, their bloody, burnt hands. I believe that we are a smart and adult nation. But if someone is still thinking about burning grass, keep in mind that it can cost you 153,000 hrv or even imprisonment,” Mr. Zelenskyy added.

Due to fires in the Zhytomyr region, local authorities are calculating the damage caused to residents, and the Cabinet of Ministers will consider the issue of compensation for these losses. “This assistance will have to be provided from the reserve fund. If people have lost their homes, if they need building materials, we should see what they need and help. The state has to support its citizens in such a difficult period,” Mr. Zelenskyy said.

According to preliminary data, about 50 people were displaced as a result of the emergency. The estimated loss amount is 25 million hrv (about $925,250 U.S.). Many burned houses were empty; therefore, there are no casualties among the population.

“Firemen say there is no radiation in the air. Experts have taken measurements between Kyiv and Chornobyl,” advised Kyiv Mayor Vitali Klitschko. “Given the information from experts, I can say that in Kyiv the smoke and air pollution are a result of the arson and smoke, but there is no radiation,” Mr. Klitschko said in a video address posted on Facebook.

The State Agency on Exclusion Zone Management informed that, as of the morning of April 18, personnel of services and departments involved in extinguishing fires in the zone had recorded no excess of radiocesium.

Rescuers have contained two of the four fire beds in the Zhytomyr region and one of the four in the Chornobyl exclusion zone. “Flights over the fire zones took place in the morning following the work done yesterday and last night. The ground forces and aviation are working properly,” Mr. Avakov said on Twitter on Monday morning, April 20. “The main efforts were aimed at containing four spots where shrubs and remainders of timber were smoldering and one smoldering peat bog,” the report noted.

The secretary of the National Security and Defense Council, Oleksiy Danilov, has said that the landowners who might be responsible for the outbreak of wildfires in the Zhytomyr region will be called to account if their involvement is confirmed.

Mr. Danilov said on his Facebook page that he had participated in a meeting of the emergency operations center in the Ovruch district, Zhytomyr region, along with the head of the Office of the President, Andriy Yermak, Internal Affairs Minister Avakov and the head of the State Emergency Service of Ukraine, Mykola Chechotkin, on Sunday, April 19. The officials went on a working visit to check the wildfire situation there.

“During the meeting, in particular, we considered the issue of liability of the landowners who might be involved in the outbreak of wildfires. It won’t be long before we find out the conclusions,” Mr. Danilov said.

Police have identified a 27-year-old local resident suspected of starting a fire; he was quoted as telling investigators that he had set some garbage and grass on fire “for fun.”

The European Union is ready to provide Ukraine with assistance to battle the wildfires, Ukraine’s representative to the EU, Mykola Tochytsky, said following a conversation with European Commissioner for Crisis Management Janez Lenarcic. “During our conversation, Janez Lenarcic assured that the EU is ready to provide its overall assistance to Ukraine for the settlement of the situation with wildfires in the Chornobyl zone. We highly appreciate the EU’s readiness to help Ukraine,” Mr. Tochytsky said on Twitter.