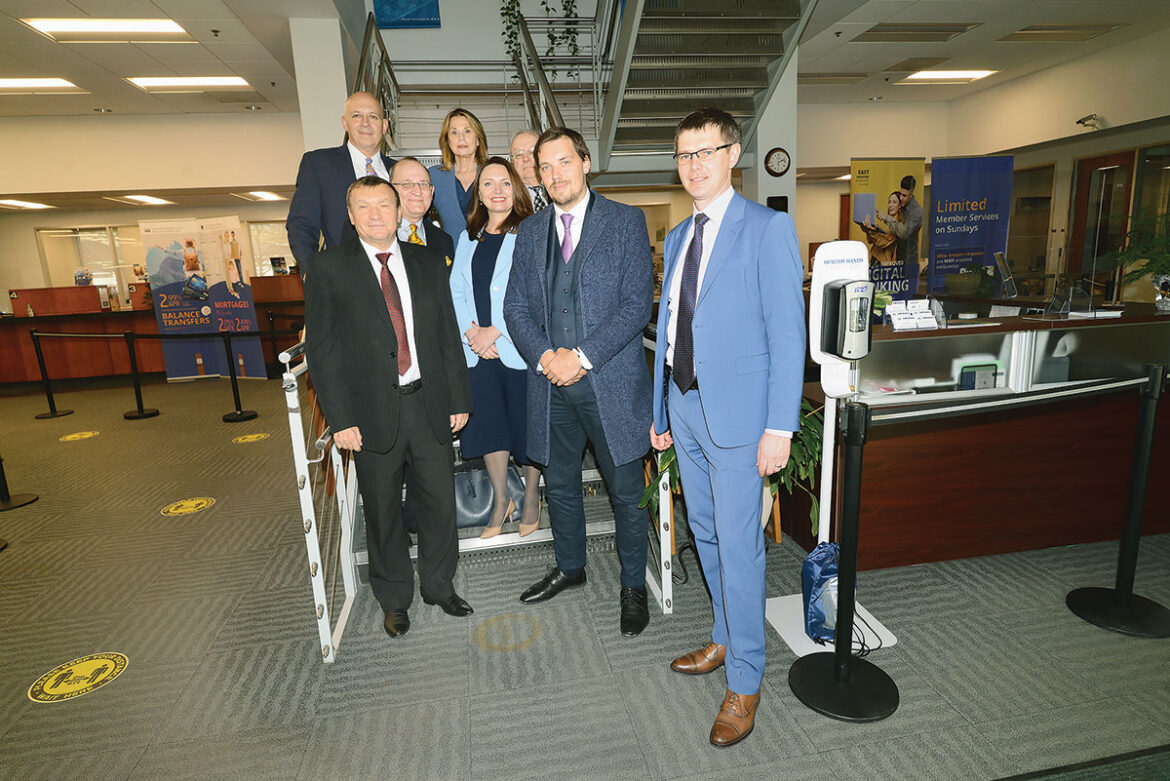 CHICAGO – During a visit to the Ukrainian Village here on March 12-13, former Ukrainian Prime Minister Oleksiy Honcharuk met with various diaspora representatives and took part in a question-and-answer session in which he addressed issues related to Ukrainian politics, corruption, implementation of land, medical and educational reforms, as well as the privatization process and the program to support small and medium business in his country.

Mr. Honcharuk, who served as prime minister from August 2019 to March 2020, said during the event at the Ukrainian Institute of Modern Art (UIMA) that he came to Chicago in order to become better acquainted with the Ukrainian diaspora in the United States.

“The diaspora’s contribution to Ukraine is significant and should be enhanced,” Mr. Honcharuk said. “Ukraine is not just a place on the map. Ukraine is where Ukrainians live with a Ukrainian heart, Ukrainian language and Ukrainian traditions.”
Mr. Honcharuk is currently a distinguished fellow at the Atlantic Council in Washington where he speaks and writes on the need for reform in Ukraine, as well as on topics of institution-building and anti-corruption efforts. While in Washington, Mr. Hon­charuk has held meetings with various members of the American government and with think tanks and media outlets.

The former prime minister arrived in the United States just before the presidential election of 2020 to help shape a new U.S. policy toward Ukraine. In his meetings with the new administration of President Joe Biden, he conveyed the importance of a democratic, successful Ukraine as a security issue not only for Ukraine, but for the countries of the post-Soviet region, as well as for Europe and the United States. He stressed that supporting reforms in Ukraine directed at rule of law, overcoming the oligarchic system of government, and military aid are priorities that will also strengthen Euro-Atlantic security.

Speaking during the question-and-answer session at the UIMA, Mr. Honcharuk said that he has no doubts about the success of Ukraine as a state, but he added that he believes there is more Ukraine can learn from the diaspora.

“The diaspora offers a source of experience in the best traditions of Western culture, of cultural investment in business, in implementation of best practices, in compliance with contracts and respect for the law,” said Mr. Honcharuk, who, as prime minister, focused on carrying out market reforms and began to transform Ukraine’s post-Soviet state apparatus. He also initiated the adoption of legislation that aided the introduction of land reform; commenced the implementation of medical and educational reforms; and launched a country-wide support program for small and medium businesses.

Mr. Honcharuk and his cabinet were dismissed by President Volodymyr Zelenskyy in March 2020 as part of a major reshuffling and a change of political direction.
Mr. Honcharuk dismissed accusations of ineffectiveness and disloyalty. In his view, the president was pressured by various influence groups who opposed reforms and wanted to preserve the status quo that benefited corrupt oligarchs.

During his visit to Chicago, Mr. Honcha­ruk met privately with U.S. Rep. Sean Casten (D-Ill.) at the Ukrainian National Museum. The pair discussed issues related to Congressional and Biden Administration support of Ukraine’s security and democracy building efforts and military capacity in the face of Russian military aggression, cyber-attacks and disinformation.

As this was Mr. Honcharuk’s first visit to the United States, he was particularly interested in meeting members of the Ukrainian diaspora. While the large Ukrainian community in Illinois is spread out in many suburbs, due to time limitations he was only able to see churches, museums, the home office of Selfreliance Ukrainian Federal Credit Union, restaurants, and stores operated and owned by Ukrainians in Ukrainian Village, located immediately west of the center of the city.

Chicago is home to one of the largest branches of Ukrainian American Veterans (UAV), an organization of U.S. veterans of Ukrainian descent. The organization spearheaded the inclusion of funding in the Military Appropriations Bill for the physical and emotional rehabilitation of Ukrainian soldiers and veterans currently fighting against Russian in eastern Ukraine.

Mr. Honcharuk was particularly interested in these efforts, as rehabilitation of veterans has been one of his priorities. While here, he met with UAV Commanders John Steciw and Peter Bencak, who shared their experience and knowledge on this topic.
The question-and-answer event was organized by the Ukrainian Institute of Modern Art together with the Kyiv-Mohyla Foundation of America and the Ukrainian Congress Committee of America-Illinois Division.

The event was moderated by Myroslava Gongadze, editor-in-chief of the Ukrainian Service of the Voice of America. Ms. Gongadze, who is considered one of the key experts in Washington on Ukrainian American relations, came to the meeting from Washington at the invitation of the organizers.

A visit to Chicago’s community would not be complete without a meeting with the board of Selfreliance Ukrainian Federal Credit Union, where Mr. Honcharuk met with Bohdan Watral, executive board member, and Vitaliy Kutnyy, president and CEO of the credit union, as well as other board members. While at the credit union, Maria Klimchak, host of the radio program Ukrainian Wave, conducted an in-depth interview with the former prime minister. That interview is available on the credit union’s webpage.

Mr. Honcharuk concluded his presentation at the UIMA with an assurance that he plans to continue his political activity and take an active part in reforming Ukraine. Mr. Honcharuk said that he believes his generation has a responsibility to build a democratic Ukraine and defend its independence, and he added that he will do everything in his power to make his country part of a civilized European community.