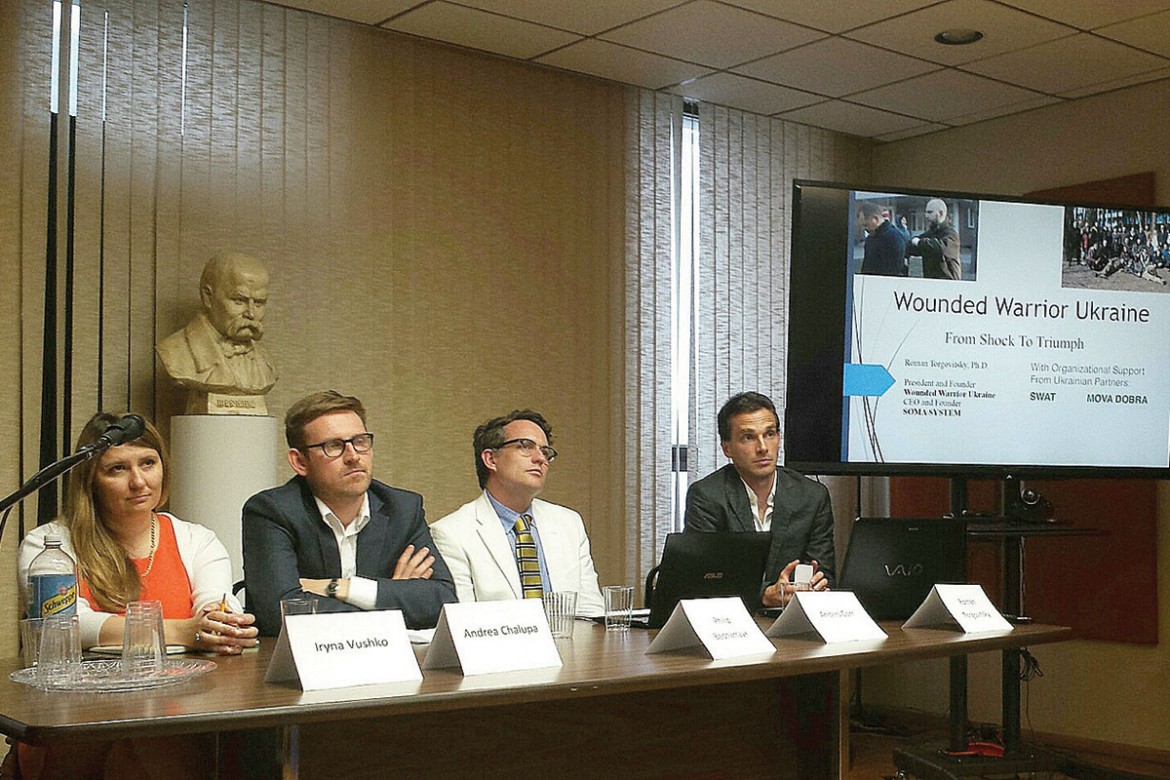 At the Shevchenko Scientific Society (from left) are: Andrea Chalupa, Philip Bednarczyk, Anders Corr and Roman Torgovitsky, who spoke on a panel about Ukraine’s humanitarian crisis.

NEW YORK – The Shevchenko Scientific Society in New York, in cooperation with the Wounded Warrior Ukraine project, held a forum on the humanitarian crisis in Ukraine. The event brought together leading experts in Ukrainian affairs including the  journalist and author Andrea Chalupa,  political analyst Anders Corr, Democratic staff  member at the House Committee on Foreign Affairs Philip Bednarczyk, as well as the head and CEO of Wounded Warrior Ukraine, Roman Torgovitsky. The discussion was moderated by Prof. Iryna Vushko of Hunter College, City University of New York.

With the war in full swing for months, the spotlight of public debates in Ukraine and in the West has been on the military conflict and its direct casualties – the dead and the wounded. The effects of the war cannot, however, be estimated in physical damage alone, as was noted at the June 13 forum. Thousands of those who survive on the frontlines oftentimes find it hard to lead a normal life away from the trenches. Hundreds of thousands of civilians experience the war in a different manner; many of them would never be able to return to normal life. Thus, the victims of the war – the combatants and the civilians – are all too often left to their own devices, with no means and no knowledge of how to deal with their own conditions.  This forum shifted attention from the immediate physical damage of the war to the long-standing psychological trauma that will shape Ukrainian society for years to come. 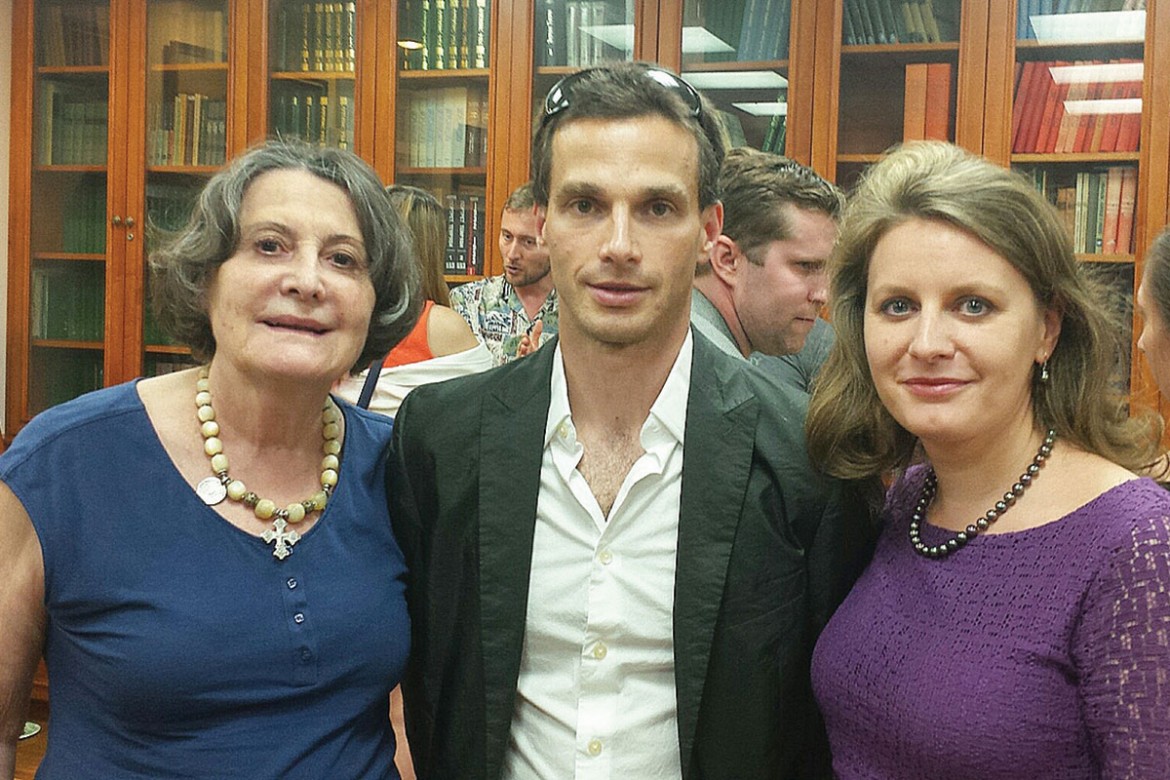 Prof. Anna Procyk (left) and Karina Tarnawsky (right), board members of the Shevchenko Scientific Society, with Roman Torgovitsky during the reception that followed the forum on the humanitarian crisis in Ukraine.

All the speakers brought their own perspectives to the issue: Ms. Chalupa spoke about the taboo surrounding psychological trauma in Ukraine and in the diaspora. Messrs. Corr and Bednarczyk explored the international perspective on the crisis in Ukraine – the former comparing it to similar crises in Georgia and Afghanistan, the latter talking about the White House response.

The highlight of the evening was the presentation by Mr. Torgovitsky, a Moscow-born activist, currently residing in Boston, who became involved in the crisis in Ukraine from the beginning of the Maidan. He travelled to Russia on business in January of 2014 and decided to visit Kyiv out of pure interest. He observed the clashes and the violence firsthand and returned again in February, just hours after the massacre on the central square of Kyiv, and was there during the funeral of the Heavenly Brigade. Then, he made a promise to himself to help in any meaningful way he could.

A Harvard trained bio-medical scientist, Mr. Torgovitsky returned to Boston after his trips to Kyiv. In the U.S., he staged protests against Russian musicians who endorsed Vladimir Putin’s policies in Ukraine: first, against Vladimir Spivakov during his concert in Cambridge, Mass., and later against Anna Netrebko and Valerii Gergiev during the premier of “Iolanta” at the Metropolitan Opera in New York City.

In December of 2014, Mr. Torgovitsky established Wounded Warrior Ukraine – a non-profit organization that offers psychological rehabilitation to veterans and civilians in Ukraine.

In his talk, he explained the concept behind the project and the work accomplished thus far. The project operates on the premise that few of those experiencing post-traumatic stress disorder (PTSD) are willing to admit to their conditions or seek professional help. The combatants and the veterans find it hard to open up to psychologists who have never gone through war and have never experienced a similar trauma.

Thus, the purpose of the project is two-fold: on the one hand, it helps people to overcome their own traumas; secondly, it provides instruments to those undergoing training to offer peer-to-peer counseling on the frontlines, in hospitals, or in civilian life.

Mr. Torgovitsky brought to Ukraine a team of Danish psychologists who have years of experience of working with war-related trauma. The training was organized into four sessions, each several days long, and was held between February and June of this year. By July, the Wounded Warrior Project graduated 24 trainees who will go on working in the field. The project is new, and it operates purely on individual donations from the Ukrainian diaspora.

The forum was the first of this kind held at the Shevchenko Scientific Society – weaving discussion of a rehabilitation project into academic debates on Ukraine, and showcasing the society’s new direction toward wider cooperation with other organizations.

The event drew a sizable and unusually international crowd, which included diplomats from the Georgian and Nepali embassies and representatives of the Polish media. They eagerly participated in the discussion, which was followed by a reception.

For more information about Wounded Warrior of Ukraine and how to get involved, readers may visit the website www.woundedwarriorukraine.org.