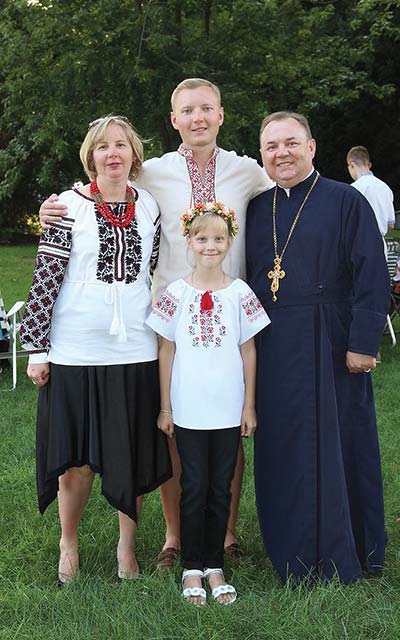 Father Andriy Dudkevych, his wife Mariya (left) and their children Marta (front and center) and Ivan.

CLIFTON, N.J. – In August, Fr. Andriy Dudkevych marked 14 years as pastor of St. Nicholas Ukrainian Catholic Church in Passaic, N.J., which serves the greater Passaic/Clifton, N.J., community. This year, the long-time pastor also celebrates his 50th birthday and the 25th anniversary of his ordination. Although many parishioners feel they know Fr. Dudkevych well, many may not be familiar with the details of his life’s journey.

Fr. Dudkevych’s story began in July 1971 in the village of Kypchyntsi, located in Kozivski raion, Ternopil Oblast, Ukraine. He was born to Rev. Myroslav Rudolf and Alla (Havryleyko) Dudkevych. He has two older sisters, Maria and Svitlana.

Like his father before him, Fr. Andriy entered the seminary in Ivano-Frankivsk in the early 1990s. He later graduated from the Theological Catechetical Institute. By mid-1995, Fr. Andriy married Mariya, the daughter of Rev. Ivan and Nadiya Popiv­chak, in Ternopil, and by that September he was ordained a deacon in Zboriv, Ternopil Oblast.

While living in Ukraine, Fr. Andriy served in two parishes following his ordination. His first parish, assigned in September of 1996, was in the village of Horodyshche, Zborivski raion. It was the same parish in which his father had served 35 years prior. He was assigned his second parish the following year; it was in the village of Haiye Roztotzki, Zborivski raion. That same year, he and Ms. Dudkevych welcomed their newborn son, Ivan.

But life would change for Fr. Andriy and his family in 2003. That year, he was granted a green card and the Dudkevych family left Ukraine for the United States. Fr. Dudkevych was appointed pastor of St. Nicholas Ukrainian Catholic Church in Passaic, N.J., in August 2007. The following year, the family welcomed a newborn daughter, Marta Maria.

Since his arrival at St. Nicholas, Fr. Dudkevych has become a deeply integral part of the community. As pastor, he has baptized 301 children, offered the first penance and solemn holy communion to 185 children, married 67 couples, visited 551 sick parishioners and mourned at 263 funerals.

He has also organized and spearheaded many parish events and projects, including restarting the children’s Sunday religious education program, coordinating the creation of the centennial parish history museum in the church basement and converting the annual parish picnic into a successful Ukrainian festival that annually draws more than 1,500 guests.

As a pastor of a long-established parish, Fr. Dudkevych has formed bonds with third- and fourth-generation Ukrainian families, as well as those who are new immigrants. He has maintained English and Ukrainian language Sunday Divine Liturgies and celebrates bilingual services including baptisms, weddings and funerals.

Through his journey, Fr. Dudkevych has remained filled with gratitude as he looks to the future.

The 25th anniversary of his ordination will be celebrated during a Divine Liturgy at 10:30 a.m. on September 12 at St. Nicholas Church, 217 President Street, Passaic, N.J., and it will be followed by a banquet at 3 p.m. at Il Villaggio restaurant in Carlstadt, N.J.