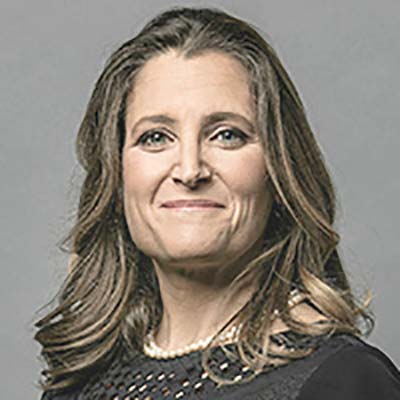 The Mark Palmer Prize, given in honor of the late U.S. ambassador and foreign policy innovator Mark Palmer, recognizes diplomats and civil servants who have gone beyond their normal course of duties to promote democracy and human rights.

“Mark Palmer was a brilliant diplomat and a relentless, effective and lifelong advocate for democracy and human rights,” Deputy Prime Minister Freeland said. “I am deeply honored and humbled to accept this award, which I think reaffirms our collective obligation to uphold human rights everywhere and always; and to work hard every day to build a world that is more democratic, more just, and more free.”

Ms. Freeland has resolutely condemned authoritarianism and human rights violations, including the Chinese authorities’ violent response to protests in Hong Kong, the persecution of Rohingya Muslims in Myanmar and the abuses of the antidemocratic Maduro regime in Venezuela. In addition, she has personally advocated for the release of sibling activists Raif and Samar Badawi in Saudi Arabia.

“Just as my husband Mark was active on the frontlines of supporting democratic transitions, Freeland has time and time again used her position to elevate the causes of people fighting for freedom,” said Sushma Palmer, founder of the Mark Palmer Prize. “Freeland’s courage and integrity are undeniable. She has been targeted with sanctions by Russia and personally rebuked by China, yet remains undeterred in her commitment to human rights.”

Ms. Freeland also demonstrated her support for protesters leading up to the 2014 Ukrainian revolution in her position as a member of the Canadian Parliament. Under her leadership as minister of foreign affairs, Canada in 2019 launched updated guidelines for supporting human rights defenders.

“We know that Chrystia Freeland will continue to provide excellent leadership in advancing democracy and standing up for those who are persecuted,” Mr. Abramowitz said.

About the Palmer Prize

The Mark Palmer Prize is administered by Freedom House, in partnership with the Community of Democracies. It was established in 2011 to honor diplomats and civil servants whose work has advanced democracy and human rights. The award was inspired by the late U.S. Ambassador to Hungary Mark Palmer, who devoted his life to supporting democratic transitions in Hungary and in closed societies globally. Among his many achievements were persuading the U.S. Congress to enact pro-democracy legislation and multiple U.S. administrations to advance and implement new democracy policies, working directly with authoritarian leaders to facilitate peaceful political transitions, and cofounding NOVA, the media enterprise that spurred the creation of independent television stations across Eastern Europe.

The Mark Palmer Prize is meant to honor individuals working tirelessly to defend democracy, human rights and civil society, and has been awarded to individuals from all over the world.