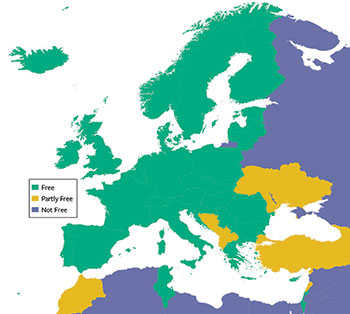 A section of the map of world freedom showing freedom ratings for countries in Europe.

Ukraine rated as partly free, Russia appraised as not free

A section of the map of world freedom showing freedom ratings for countries in Europe.

WASHINGTON – Economic downturns and fear of social unrest have led Russia, China and other authoritarian regimes to crack down harder on dissent, while mass migration and new forms of terrorism in 2015 fueled xenophobic sentiment in major democracies, according to “Freedom in the World 2016,” Freedom House’s annual report on political rights and civil liberties.

The report, which was released on January 27, marked 2015 as the 10th consecutive year of decline in global freedom.

“In many countries with authoritarian governments, the drop in revenues from falling commodity prices led dictators to redouble political repression at home and lash out at perceived foreign enemies,” said Arch Puddington, senior vice-president for research at Freedom House, an independent watchdog organization that supports democratic change, monitors the status of freedom around the world, and advocates for democracy and human rights.

The number of countries showing a decline in freedom for the year – 72 – was the largest since the 10-year slide began. Just 43 countries made gains. Over the past 10 years, 105 countries have seen a net decline, and only 61 have experienced a net improvement.

On Freedom House’s ratings of political and civil liberties, Ukraine continued to be rated as partly free – a status unchanged from the previous year. Russia was rated not free in both categories, just as it was in the report released in 2015. Of the 195 countries assessed, 86 (44 percent) were rated free, 59 (30 percent) partly free, and 50 (26 percent) not free.

The report cites Europe’s inability to manage the surge of asylum seekers from Syria and other conflict zones – on top of lingering economic woes – as the pretext for populists to rail against the European Union and the liberal, universal values that it represents.

Meanwhile, wary of declining living standards and the social unrest they could cause, repressive petro-states from Angola to Azerbaijan cracked down on rights activists and other critics.

Other troubled countries turned to elections as a corrective mechanism. In Nigeria, Venezuela, Myanmar and elsewhere, voters sought new leadership from opposition parties, offering a peaceful way out of failed policies and mismanagement. While all forms of government are under pressure, these fresh starts suggest that democratic systems may ultimately prove more resilient than their brittle authoritarian counterparts.

Among the reports finding were these:

• Ratings for the Middle East and North Africa region were the worst in the world in 2015, followed closely by Eurasia.

• Leaders in several countries maneuvered to extend their terms in office during 2015, most prominently in Burundi, but also in Bolivia, Ecuador, the Democratic Republic of Congo, the Republic of Congo and Rwanda.

• Token improvements in women’s political rights and civil liberties, such as women in Saudi Arabia participating in tightly controlled elections for largely powerless municipal councils, have been eclipsed by the shocking lack of genuine progress globally.

• Macedonia, Bosnia and Herzegovina, and Kosovo all suffered from crippling government dysfunction in 2015, precluding democratic gains and ensuring that European Union accession remained a distant prospect.

• Although the world’s attention turned to new disasters during 2015, the previous year’s dramatic setbacks for freedom in Thailand, Egypt, Crimea and South Sudan continued to fester.

• Over the last decade, the most significant global reversals have been in the areas of freedom of expression and the rule of law.

Reporting on the world’s regions, Freedom House noted this about Eurasia: “Facing new pressures due to the collapse of world energy prices, President Vladimir Putin maintained his policies of repression within Russia, including persecution of LGBT activists and independent journalists, and military intervention abroad. Moscow controlled Crimea with an iron grip, continued its support for rebels in eastern Ukraine, and began a campaign of bombing in Syria in an effort to shore up the tyrannical regime of Bashar al-Assad.”

“Russia was forced to deal with falling oil prices at a time when international sanctions over its invasion of Ukraine – plus countersanctions that hurt Russian consumers at least as much as the intended targets – had already weakened its economy and threatened its indebted state-owned companies. Adding to its expensive military occupations in parts of Ukraine, Georgia and Moldova, the Kremlin intervened in Syria in late 2015 to shore up support for Assad. Analysts warned that it could prove costly in financial, military and political terms.

“The Russian authorities were sensitive to the possibility of popular discontent, using the state’s high-volume propaganda apparatus to shift emphasis from the stalemate in Ukraine to the new adventure in Syria. The regime also took measures to stifle criticism of its foreign interventions. Opponents have been derided as traitors, forced from their jobs, arrested, or pushed into exile. To drive home the leadership’s intolerance for dissent, President Vladimir Putin issued a decree making it illegal to publish information about military casualties even during peacetime. The head of a committee of soldiers’ mothers was convicted of fraud after publicizing the cases of Russian troops killed in eastern Ukraine, where the Kremlin has implausibly denied that any Russian forces are deployed.”

They also wrote: “Crimea, which dominated global headlines after Russia’s invasion in 2014, languished in a grim status quo, and de facto Russian control of the Donbas region in eastern Ukraine was solidified in both military and economic terms.”

To view the full report online, readers may go to https://freedomhouse.org/report/freedom-world/freedom-world-2016.