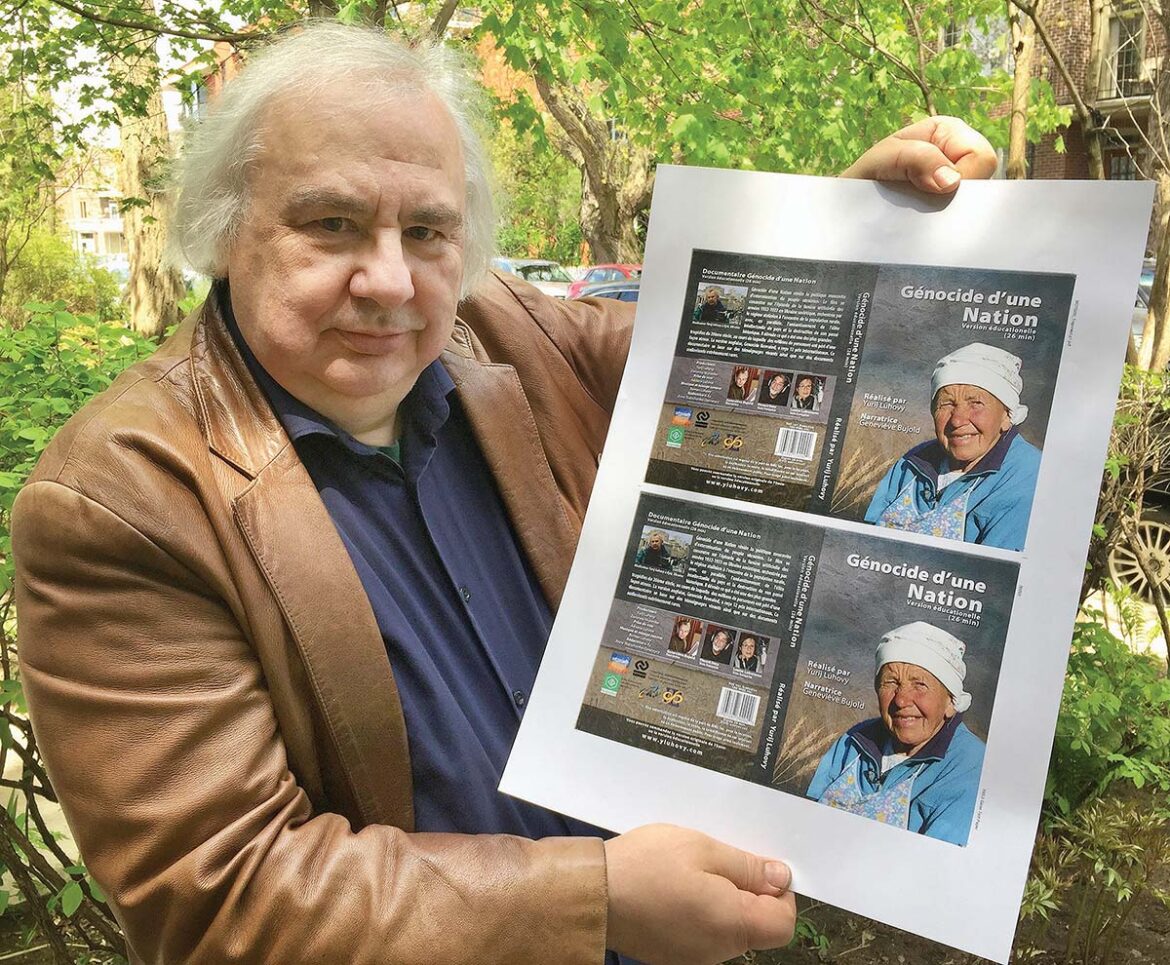 MONTREAL – The French-language educational version of the documentary film “Le Génocide d’une nation,” produced and directed by Yurij Luhovy, has been made and released on DVD. Narrated by international acclaimed actress Geneviève Bujold, the 26-minute school version will be an important addition to French-language resource material for educators in the teaching of the Holodomor worldwide.

The DVD’s June release marked the 10th anniversary of the Province of Quebec recognizing the Holodomor as genocide. On June 3, 2010, the Quebec National Assembly, in a third and final reading, unanimously passed Bill 390, “An Act to proclaim Ukrainian Famine as Genocide (Holodomor) Memorial Day.” Attending this historic event in Quebec City was Ukraine’s former Ambassador to Canada Ihor Ostash, with members of the Ukrainian Canadian Congress (UCC) Montreal Branch and Montreal’s Ukrainian community. Quebec joins five other provinces recognizing the 1932-1933 Famine as Genocide; in 2008, the Parliament of Canada recognized the Holodomor as Genocide.

The DVD release of the French educational documentary for schools and general public was made possible with the financial support of Caisse Populaire Desjardins Ukrainienne de Montréal (Kasa). This included creating a new DVD cover with new graphic design. “I am most grateful to Kasa, Mr. Yurko Kulyckyj, Evhen Czolij and Kasa members for ensuring the availability on DVD,” said Mr. Luhovy.

The Canada Ukraine Foundation made the educational version possible. The lengthy process of shortening the original French-language 75-minute feature documentary “ Le Génocide d’une nation” to a 26-minute school version was conceived and initiated by Roma Dzerowicz, executive director of the Holodomor National Awareness Mobile Classroom Bus, a project of the Canada Ukraine Foundation (CUF), which sponsored the project. Seeing a need for French-language material, Ms. Dzerowicz proceeded to make this happen.

Mr. Luhovy explained that making the shorter school version of the documentary “required going back to the original Ukrainian-language visually time-coded elements used for the 75-minute French final mix of ‘Le Génocide d’une nation.’ For the 26-minute version, one had to keep the storyline but condense it in a way without affecting the understanding. By selecting the essence, you still explain the Holodomor. The original Ukrainian dialogue had to be selected which included the French male and female voice-over. The original sound Fx’s on the 75-minute French version had over 180 tracks. A humongous task presented itself to keep everything in sync.”

“It was also complicated to shorten the original music, which consisted of eight tracks. In editing out scenes that had overlapping music in the original feature length, a decision had to be made which of the two music is to be eliminated and which one is to be kept, creating another dilemma,” he continued. “You have to avoid any collision of two music scores. A careful selection keeps the flow and soul of the film. The new shortened version has to look and feel seamless.”

“Throughout the reduction process, quarantined in my home-studio, I worked closely with Ms. Dzerowicz of CUF, keeping her apprised of every step. I was very fortunate to find a lab still open during this COVID-19 pandemic to complete the project,” he noted.

This multi-award-winning documentary exposes Moscow’s policy of genocide against the Ukrainian nation. Mr. Luhovy’s film focuses on the 1932-1933 man-made famine in Soviet Ukraine engineered by Stalin’s regime against the rural population, and the accompanied decimation of the national elite and destruction of Ukraine’s historical past. The all-encompassing scope of genocide is captured.

The Holodomor Mobile Classroom (HMC) is described as “a state-of-the art interactive audio-visual learning center geared to high schools, universities and the general public.” It travels throughout the country to inform Canadians, raising awareness about the 1932-1933 Famine. The custom built Holodomor mobile bus, features a 24-foot high-resolution screen with 12 4K TV monitors that span almost the entire interior inside wall. Documen­taries in French, English and Ukrainian are shown.

In the fall, the HMC will be visiting French-language schools and communities in Quebec, including the Abitibi area. The over 9 million-strong Francophone population of Quebec and Canada is presented with much-needed French-language resources.

“We are very pleased the Canada Ukraine Foundation will be bringing the Holodomor Mobile Classroom bus to the rest of Quebec province and [that] the DVD is made available. Most of the survivors of the Holodomor living in Montreal have passed away. Their descendants and the community at large continue to ensure one of the greatest tragedies of the 20th century is never forgotten. Educating future generations is paramount,” commented Mykhailo Shwec, president of Ukrainian Canadian Congress Montreal branch/Quebec Provincial Council.

For additional information about the Holodomor Mobile Classroom e-mail Holodomor.tour@cufoundation.ca, see the Tour website at www.holodomortour.ca or call 416-966-9800. To donate or purchase copies of the educational version on DVD go to www.yluhovy.com or e-mail mmlinc@hotmail.com.