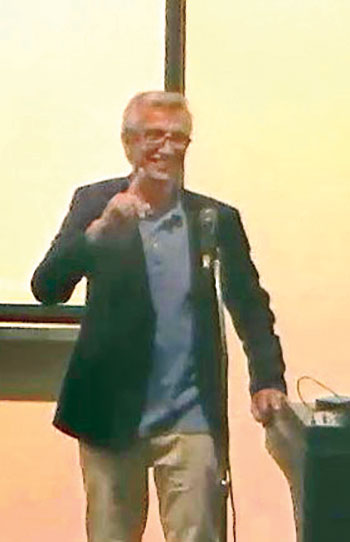 Andrew Tkach answers the audience’s questions during the post-screening discussion of “Hunger for Truth” at California State University, Fresno.

FRESNO, Calif. – “Truth, does it matter? Is it constructive?” A newly discovered voice cuts through the historical haze. She is Rhea Clyman, a young Canadian reporter of Polish Jewish background, who traversed the starving Soviet heartland in eastern Ukraine when Joseph Stalin’s man-made famine was just beginning.

Clyman’s newspaper articles from 1932-1933, published in the Toronto Telegram and the London Daily Express, show her remarkable resourcefulness and courage. After she was banished from the USSR for writing about the Famine and the Gulag, this brave woman went on to cover Hitler’s early years in power.

Today another Russian autocrat is trying to dismember Ukraine by using disinformation and brute force. Those areas that suffered from the Famine Genocide are currently invaded by Russia, where the ongoing war has lasted for over four years. Ukraine’s soldiers are held as prisoners of war. In central Ukraine two little girls are growing up without their dad, Serhiy Hlondar, a member of Ukraine’s Special Forces, who was captured in the battle of Debaltseve a day after Russian-led forces were meant to silence their guns in accordance with the Minsk 2 agreement. Mr. Hlondar has never seen his youngest daughter, and after 700 days of captivity his family has received only seven letters to keep their hopes alive.

“Hunger for Truth,” directed by Andrew Tkach, was a co-production of the Canada Ukraine Foundation, the Messy Moment Media and #Babylon’13. The film featured Ukraine’s most prominent musical voices: Jamala, Onuka, Dakha Brakha and Dakh Daughters. The documentary won honorable mention in the short film category, non-fiction, at the 2018 U.S.A. Film Festival in Dallas.

The French-American filmmaker of Ukrainian ancestry, Mr. Tkach, a visiting faculty member and director of Environmental Reporting Program at the Aga Khan University Graduate School of Media and Communications, traveled a long way from Nairobi, Kenya, to join the post-screening discussion in Fresno in November 2018. Over 25 years of producing documentaries and television magazine reports, Mr. Tkach has visited some of the world’s most difficult places and has won eight News and Documentary Emmys for his work. He worked as the principal long-form producer of Christiane Amanpour, CNN’s chief international correspondent.

Mr. Tkach dedicated the film showing to the unsung “heroes of our time,” journalists like Clyman who risked everything to tell the truth wherever it led them. Among them he listed those who paid the ultimate price, journalists like Jan Kuciak from Slovakia, Daphne Galizia from Malta, Pavel Sheremet from Belarus, Anna Politkovskaya from Russia and Javier Valdez Cardenas from Mexico, and just this month Katerina Handziuk of Ukraine, who aside from being a civic activist co-founded the agency of civic journalism Mist, or Bridge.

“Too many reporters are still being killed today for their tenacity and unwillingness to accept the prevailing narrative,” said Mr. Tkach.

The Department of History at California State University, Fresno, premiered the film on Friday, November 9, 2018, two weeks ahead of the 85th anniversary commemoration of the Holodomor. The premiere of the documentary was sponsored by the Associated Students Inc., the Ukrainian National Women’s League of America and the Ukrainian American Coordinating Council.

The documentary was a stark reminder of the necessity to safeguard one’s freedom and human rights. The film inspired women in the audience, like Yessica Casas, a freshman at Fresno State. “Rhea Clyman, as presented in the film, encountered dangerous situations in her life that may have many scholars wondering why she didn’t just take the role of the average woman and stay home. Clyman was literally ‘hungry for truth’ and set off thousands of miles from home to find it,” said Ms. Casas.

To freshman Michael Yang, a first-generation Hmong American, the word “genocide” rang true because of the experiences of his ethnic group. “Like the Hmong, the many Ukrainian groups suffered quietly,” said Mr. Yang. He further stated, “If not for Rhea Clyman, no one outside of Ukraine and the Soviet Union would have known about the Holodomor until much later (decades to centuries). It is important to teach about these horrible historic events to educate, evolve and prevent future happenings of genocide.”