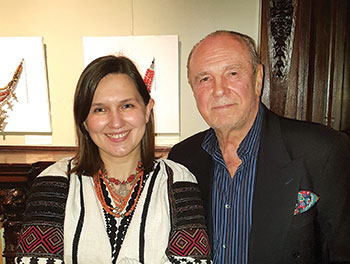 Slava Salyuk and Walter Hoydysh, Ph.D., director of Art at the Institute.

NEW YORK – In her first ambitious showing with the Ukrainian Institute of America in New York, Lviv-based designer Slava Salyuk finds – in the aptly titled “Geography” – an avenue to combine her wanderlust spirit and her inventive fervidness to craft jewelry that goes beyond its aesthetics. And, embrace the beauty it does – on multiple levels. Each of the 32 necklaces displayed reveals a deep-rooted narrative, the cross-cultural currents that inspired it and the grace captured by it.

The personal adornment of jewelry – besides enhancing beauty – symbolizes status, wealth and assets, excites the sense of prized possession, arouses aesthetic satisfaction, displays the craftsmanship that goes into its creation and continues age-old traditions. 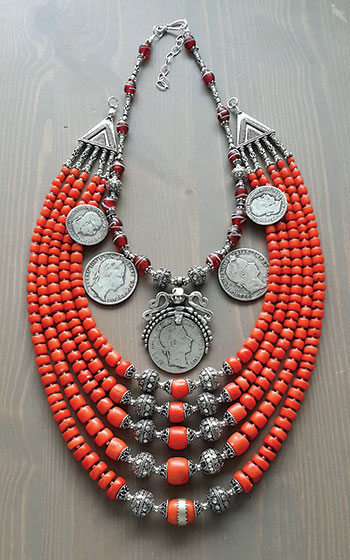 Courtesy of the artist

In much of the four corners of the world, jewelry has a significant function in the life of the community, and is carefully preserved, only to be brought out on the most important occasions, such as weddings and funeral ceremonies. It serves as an ecumenical symbol of protective powers and traditional and religious connections. From birth to death, jewelry plays an integral role in rite-of-passage rituals and is worn as insignia to mark the stages of an individual’s life. Perpetuating spiritual and ethnic meaning that underlies its use as a ritual artifact, jewelry reinforces expressions of strong emotions and diversity of social phenomena.

Ms. Salyuk’s intricate and ornate necklaces reflect on traditional global motifs and inclinations. “Geography” is an artisan’s uniquely introspective journey through time and place where unexpected parallel decorative and design influences from Africa, the Arabian Peninsula, South Asia, Latin America and the Ukrainian Carpathian Mountains demonstrate mystical relationships between distinct cultures whose ethnic and spiritual paths have never genuinely nor concretely crossed. Ms. Salyuk is naturally attracted to the wealth and variety of craftsmanship that stems from these history-laden lands, and particulary fascinated by the exquisite ethnic and tribal jewelry that originates from the Middle East and Asia, as these feature strongly in her work. 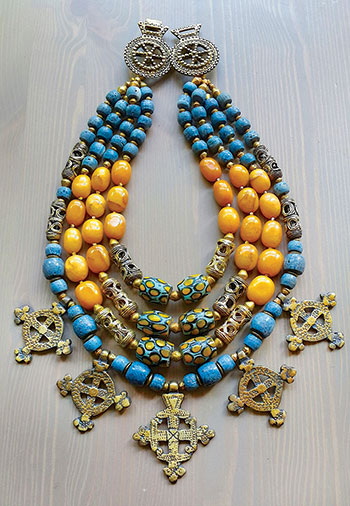 Courtesy of the artist

Through the lyrical fusion of materials and craft, each piece of the artist’s neckwear is enriched with the collected insight, nuanced meaning and power that is woven into the organic essence of being and tradition. Ms. Salyuk’s maintains a near obsessive predisposition for collecting and employing a diverse array of materials such as semi-precious stones, Venetian glass, Hutsul and Coptic cruciﬁxes, silver ancien régime coins and medallions, and beads to create necklaces that retain unique elements of the multicultural past while adapting a personal vocabulary within a contemporary context.

Ms. Salyuk was first exposed to jewelry design by her late father, noted artist, jeweler and ethnographer Lyubart Lishchynskyi. He shared with her an innate knowledge and demonstration of craft, spirituality, and cultural and national awareness. Demonstrating a harmonious rhythm, together they crafted unique interpretations of Hutsul-inspired zgarda. Following her father’s untimely death in 1998, Ms. Salyuk continued in their joint practice, eventually developing her own voice and style.

Already ﬂuent in traditional Ukrainian motifs, she became intrigued by the similarity of women’s ethnic jewelry from distant cultures and periods. As she sourced materials from around the world, she detected that, for example, an 18th century Ethiopian cross could easily be mistaken for a cross made in Kyiv in the 13th century, or that a Coptic cross might bear similar motifs to those found on Hutsul carved architectural details and decorative chests. These observations were the beginnings of what has evolved into “Geography,” an exploration three years in the making.

This exhibition doesn’t explicitly question another hierarchy of aesthetics – the division between art and “ethnographic” artifacts. But, the questions come easily enough. Every necklace bears a captivating story regarding the origin and symbolism of each element, stone and cross. Just like a flame, each piece is as enticing and alluring as the next, and the closer the viewer is drawn to it, the more engulfed by the depth of its anticipated meaning. This makes Ms. Salyuk’s culturally inspired creations the arsenal of a globally minded woman who celebrates its context as the essence of being human – adornments that encompass the world.

Ms. Salyuk graduated from Lviv College of Technology with a concentration in fashion design. In 1994, she founded the Lviv fashion studio collective Secession, which was active until 1999. Since then, she has maintained a sole practice as a freelance designer and regularly exhibits her creations with Iconart Contemporary Scared Art Gallery, in Lviv. Her wearable designs are highly sought-after and widely collected in Ukraine and abroad. Ms. Salyuk lives and works in Lviv.

Curated by the director of Art at the Institute, Walter Hoydysh, Ph.D., “Geography” is on view through April 2 at The Ukrainian Institute of America, 2 E. 79th St. Exhibition hours are Tuesday to Sunday, noon-6 p.m., or by appointment. Ms. Salyuk’s crafted neckwear designs are available for purchase through the UIA office. For further information, readers may call Olena Sidlovych, UIA executive director, at 212-288-8660 or e-mail at mail@ukrainianinstitute.org.