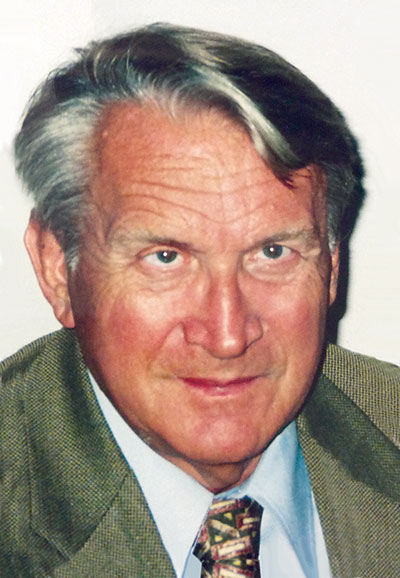 PHILADELPHIA – On Saturday, January 11, the Ukrainian American community of Philadelphia bid its final farewell to Dr. George A. Perfecky, retired professor of foreign languages at La Salle University. The Annunciation of the Blessed Virgin Mary Church was filled to capacity with family, friends, colleagues and two generations of former students. Also in attendance was the past president of the university, Brother Michael McGinness, FSC.

Prof. Perfecky, the son of Bohdan and Natalia (Czolij) Perfecky, was born in the Polish crown city of Piotrkow Trybunalsky on May 27, 1940, and died on December 28, 2019, in Warminster, Pa., at the age of 79. His childhood and youth followed the path of World War II refugees, who fled war-torn Ukraine, were detained in Displaced Persons’ camps, and finally emigrated to America. The young Perfecky family settled in Philadelphia, where George joined Plast, enrolled in the Ukrainian Music Institute and played varsity soccer.

After attending Central High School, Mr. Perfecky graduated with honors from the University of Pennsylvania with a degree in Russian and German, and entered Columbia University in New York to continue his graduate work under renowned linguist and philologist Yurij Shevelov. He received his M.A. in 1966 and then in 1970 his Ph.D. in Slavic languages and philology from Columbia.

Prof. Perfecky began teaching in the Department of Foreign Languages at La Salle University in 1965. It was a very gratifying and successful career that lasted 50 years. He taught and developed courses in Russian, German, Ukrainian, Polish and, for the last decade, Spanish, after getting yet another master’s degree in bilingual bicultural studies in Spanish. In 1989 he was named a full professor. For years he served as the faculty advisor to the Ukrainian Club.

The core of Dr. Perfecky’s academic and research work centered around Old Church Slavonic chronicles. His most important scholarly contributions were his book “The Hypatian Codex II : The Galician-Volynian Chronicle – An Annotated Translation,” which was published in Harvard’s Series in Ukrainian Studies and several important articles related to this chronicle, such as “The Galician Volynian Chronicle as a Source of the Ukrainian Language and Historiography” (in Ukrainian), and a series of articles on the language, authorship and composition, chronology, bias and bibliography of that chronicle which appeared in the Annals of the Ukrainian Academy of Arts and Sciences in the U.S.

Writing in 2017 about Prof. Perfecky’s translation of this Chronicle, historian Dr. George Gajecky, described it as a pioneering and important documentary work on the history of this Ukrainian medieval state. He stated that the author had to resolve many linguistic problems and terminological phrases. He added that the work gave the English-language reader a primary-source interpretation of 13th century Rus’. Up to this time, only a Russian translation of the Chronicle was available to that reader.

Recently, the third volume of Mykhailo Hrushevsky’s monumental “History of Ukraine-Rus’ ”appeared in print in Canada. This volume is dedicated to the history of the Galician Volynian State. Dr. Gajecky noted that “all base their work on that of Perfecky,” because it was he who first pointed out correctly, relying on his research, that the heir of Kyivan Rus’ was Galician Volynian Rus’ and not Muscovy or Suzdal.

Prof. Perfecky also translated the 17th century Hustyn Chronicle, which represented the first attempt of early chroniclers to write a systematic history of Ukraine, and the Bykhovets Chronicle.