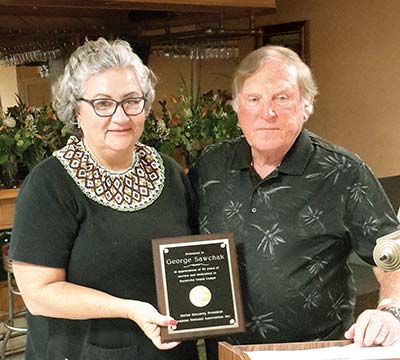 George Sawchak, pictured in 2016, received an award from the Ukrainian National Association and Soyuzivka Heritage Center honoring his 50 years of service and dedication to Soyuzivka Tennis Camp. He is pictured with UNA Advisor Bohdana Puzyk, who presented him with the award.

PARSIPPANY, N.J. – George Sawchak, a former ranked U.S. Tennis Association Middle States player and member of the Ukrainian Sports Hall of Fame and the Ukrainian National Association (UNA), died on August 21 after battling a long illness, according to his wife.  He was 82.

For more than half a century, Mr. Sawchak ran the annual tennis camp held at the Soyuzivka Heritage Center in Kerhonkson, N.Y. (for many of those years he was joined by Zenon Snylyk). Mr. Sawchak also ran many of the tennis tournaments held during the Fourth of July and Labor Day weekends at Soyuzivka.

Those tournaments, run by the Ukrainian Sports Federation of the U.S.A. and Canada (known by the Ukrainian-based acronym USCAK), are sponsored by the Ukrainian National Association (UNA), of which Mr. Sawchak was a member (Branch 83 in Philadelphia). He was also a member of the USCAK Tennis Committee since 1967 and its director since 1989.

In 1991, Mr. Sawchak organized and led the Ukrainian-American USCAK tennis team which traveled to Ukraine to compete in the Olympiad.  In 2016, he was inducted into the Ukrainian Sports Hall of Fame for his tremendous leadership and dedication to the sport of tennis. He was also the tennis director of the Ukrainian American Sport Center Tryzub for many years.

Born on April 27, 1939, in Lviv, he immigrated to the United States in 1950 with his family, father Roman, mother Jaroslawa and sister Halyna. The family spent their first five years as emigrees in Mittenwald, Germany, in a displaced persons’ camp where Mr. Sawchak excelled in school and sports.  He was active in the Plast Ukrainian Scouting Organization, was a competitive chess player and an avid stamp collector.

Mr. Sawchak attended Bishop Neumann High School in Philadelphia, where he excelled in math and played on both the basketball and soccer teams and ran track.  He attended Drexel University where he was a starting member of the famed men’s soccer team that won the NCAA championship in 1958 with an undefeated season.  He also competed on the men’s tennis team where he won 16 straight singles matches, a record at the time.

While a student at Drexel University, Mr. Sawchak took part in the Reserve Officers’ Training Corps (ROTC), one of the nation’s first ROTC units.  In 1963, he graduated from Drexel University with a degree in mechanical engineering and was commissioned a second lieutenant in the U.S. Army.

After marrying Patricia (Kociubajlo) Sawchak in Philadelphia in 1963, the young couple moved to Fort Bragg, N.C., where he served from 1963 to 1967 in the 13th Airborne Corps of the 92d Engineer Battalion, attaining the rank of Captain.

Upon leaving the Army, he moved back to Philadelphia to begin his career.  While working as a professional engineer (P.E.) and as the father of two small children, Tetiana and Leda, he returned to Drexel to earn his MBA in finance.  He spent his career as a director of engineering for companies such as the FMC Link-Belt Corp., British Tyre and Rubber, and Rexnord Corp., before retiring.

Mr. Sawchak was the tennis champion at the legendary Rifle Club in Philadelphia before helping to found the Delaware Valley Tennis Club in Huntingdon Valley, Pa., where he was a member for more than 40 years.  At that club, he was also a past president, vice president and director for many years.  There he played recreationally and competed in and organized many club-sanctioned tournaments over the years.  He also served as the captain of many United States Tennis Association senior men’s intersectional teams, for many years organizing groups to compete across the United States.  He was the head instructor of the Advanced Gold Club program and an instructor of the National Junior Tennis League.  A tremendous organizer and competitor, he also won a countless number of tennis tournaments throughout his many years of competitive play.

In addition to his love of tennis, Mr. Sawchak was very passionate about music. He played the piano and sang in a jazz band during his time in high school and college.  For more than 40 years, he sang in the Prometheus Male Chorus as a second tenor, very much enjoying the camaraderie of the group.  He also loved playing the piano at home and could always be heard humming or singing.  But above all, he adored his family both in the United States and Ukraine.

Mr. Sawchak is survived by his wife of 57 years, Petrusia (Ms. Sawchak used this name when writing many stories for The Ukrainian Weekly); daughter Tetiana with fiancée Dawei Yin and granddaughters Ariadna and Juliette; daughter Leda (Don) Kopach and granddaughter Katya; his sister, Halyna Kutko; and many nieces and nephews.