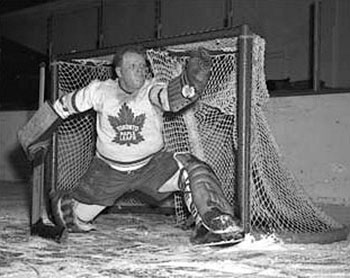 Walter Edward “Turk” Broda was born in 1914 and very quickly as a youngster fell in love with hockey. He grew up wanting to be a defenseman, but had lots of difficulty as a skater. When his Brandon, Manitoba, school organized a hockey team, Broda had high hopes, which were soon enough dashed because of his poor skating. At the time, coaches usually selected the chubbiest kid to play goalie, so Broda had shots fired at him every day in practice.

At age 18 he was called up to the Brandon Native Sons junior team as an emergency replacement goalie in the 1933 Memorial Cup Western Canada final. The next season he became a starter in Winnipeg where he caught the interest of a Detroit scout. By age 20 he was being utilized by the Detroit Red Wings as a practice goalie because he made for a good target. It did not hurt his cause that he was a pleasant fellow, well liked and popular in the dressing room.

Practice kept making him better between the pipes and he progressed to the Red Wings’ farm team the following year, guiding the Detroit Olympics to an International League title, sporting the league’s top goals-against average.

About the same time, the Toronto Maple Leafs were looking to finally replace 41-year-old George Hainsworth. Leafs’ general manager Conn Smythe heard about an impressive 24-year-old goalkeeper named Earl Robertson, playing with Windsor in the IHL. On a scouting trip, Smythe observed Robertson in action, but was way more impressed by the net-minding abilities of the plump 21-year-old from Brandon.

Broda proceeded to spend the next seven years manning Toronto’s crease, missing a mere four out of 338 games. In 1940-1941, his fifth NHL season, he won the Vezina Trophy as the league’s top goalkeeper. The following year he led Toronto to the Stanley Cup. His pleasant nature allowed him to make friends everywhere he went, his happy-go-lucky personality registering with teammates, fans and even opponents.

His personal bout against weight gain was an ongoing battle. If his game was on, not a word was mentioned, whereas struggles in net led to comments regarding his girth. Several poor performances in a row resulted in references as “Fat Boy” with so-called hockey experts claiming Broda was eating his way out of the league. Turk would go on to miss the 1943-1944, 1944-1945 and most of the 1945-1946 seasons while he served in the Canadian military forces during World War II.

Strangely, his fitness level did not improve in the army, but his play in front of the net was spectacular upon his return. He finished fourth in Hart Trophy (league MVP) voting in his first full season back (1946-1947), and spearheaded his Leafs to three consecutive Stanley Cups, becoming the first goaltender in NHL history to accomplish the feat. The 1947-1948 season saw him win his second Vezina Trophy.

Weight continued to be an issue, and although Broda laughed it off, GM Smythe pursued it to the point of a contract addendum in the form of a dollar-per-pound clause at the start of 1950-1951. Listed at 5-foot-9, 165 pounds, it was common knowledge his playing weight could fluctuate upward by some 40 pounds. The clause made him step on the scales every payday – if he weighed less than 190 pounds, then he would receive a bonus – if he exceeded 190 pounds, his paycheck would be garnished. At the time, this story made for great headlines and photos.

Broda’s first official weigh-in touched 194-¾ pounds and he began to regularly spend more time in a steam chamber prior to stepping on the scale. It was like a boxer knowing water weight was one key to staying within a weight class. Well into his mid-30s, Broda was beginning to look slow and unorthodox, but still capitalized on his keen sense of positioning and poise in clutch situations. His teammates called him “Old Slippery” or “Slip” for the way he moved around in front of the net, always in the right place at the right time.

To his credit, Broda did not take himself too seriously. He ate when he felt like it, sneaked smokes in the bathroom between periods, and loved beer. His drinking was highlighted by the famous story of him partying the night away with an American soldier in Los Angeles during the 1942-1943 season. Reportedly a military police officer was searching for missing soldiers early the next morning and located Broda’s drinking buddy passed out in the orchestra pit of a famous Hollywood night club. Broda was seated at the piano, playing a duet with the night’s featured performer, legendary jazz pianist Hoagy Carmichael. Later that night, Broda shut out the Montreal Canadiens, 1-0, in the final game of a playoff series.

Broda earned his fifth Stanley Cup with Toronto in 1951, and retired after one game the next season, happily overweight.

There are two different versions of how young, freckle-faced Walter, son of Ukrainian immigrants, got his nickname. One was in class, when his English teacher was speaking of an old English king who was covered in spots. Citizens called their king “Turkey Egg” because of his freckles. A fellow classmate said that Walter looked like a turkey egg. The second version claimed the nickname was a description of the way young Walter was built. He had a large upper body with short, skinny legs, leading to classmates calling him “Turkey Legs.” Eventually the moniker got shortened to “Turk,” and it followed him for the rest of his life.