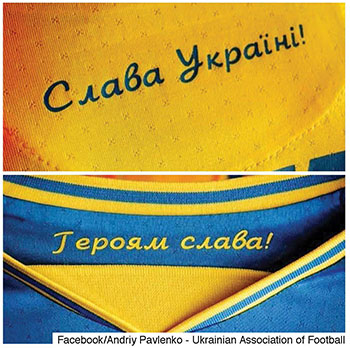 The patriotic slogans “Glory to Ukraine!” on the outside (top) and “Glory to the Heroes!” on the inside collar of Ukraine’s Euro 2020 jerseys.

Outline of Ukrainian map that angered Russia can stay

The patriotic slogans “Glory to Ukraine!” on the outside (top) and “Glory to the Heroes!” on the inside collar of Ukraine’s Euro 2020 jerseys.

PARSIPPANY, N.J. – Europe’s soccer governing body, UEFA, ordered Ukraine on June 10 to change its men’s national soccer team’s jersey based on a complaint from Russia that came a day before the month-long quadrennial tournament begins.

At issue were two slogans and a map of Ukraine emblazoned on the jersey that the country unveiled on June 6 after which Russia’s foreign affairs ministry and several members of parliament publicly protested.

Moscow had balked at Crimea, the Ukrainian peninsula that it had forcibly seized in 2014, being included in the outline of Ukraine that was emblazoned on the official jersey, as well as the slogans “Glory to Ukraine! Glory to the Heroes!”

UEFA ordered Ukraine to remove the slogan “Glory to the Heroes” because of its political connotations in conjunction with “Glory to Ukraine,” according to a statement sent to The Ukrainian Weekly.

It allowed the remaining components to remain on the national squad’s uniform for use in the Euro 2020 championship, which was originally scheduled to be held last year but was moved to June 11-July 11 as a result of the ongoing COVID-19 pandemic.

In totality, the jersey features the Ukrainian trident (tryzub) and a subtle map using embroidery motifs for the outline of Ukraine, including the Russia-occupied parts of the easternmost Luhansk and Donetsk regions. On the exterior, “Glory to Ukraine!” is printed, while the slogan “Glory to the Heroes!” can be found on the inside of the collar.

The following day after the jersey’s unveiling, a Russian Foreign Affairs Ministry spokesperson criticized the national team outfit as “the illusion of the impossible” while characterizing the slogans as fascist. 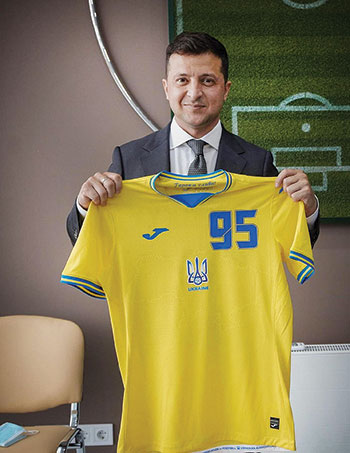 Ukrainian President Volodymyr Zelens­kyy holds Ukraine’s Euro 2020 home jersey that includes an outline of Ukraine on the front and the slogan “Glory to the Heroes!” on the inside of the collar.

The slogan “Glory to Ukraine” can be found in revered Ukrainian bard Taras Shevchenko’s writing and is traced to World War I when the country enjoyed a brief period of independence before the Red Army and Poland annexed the country in half.
Both the world soccer governing body, FIFA, as well as UEFA have charters that ban political statements on national team outfits.

Yet, Ukraine’s soccer association maintains the slogans are the equivalent to what the French say, “Vive la France,” or the English say, “God save the Queen,” both slogans that have existed for more than a century, as has Ukraine’s.

In its decision, UEFA said the “specific combination of the two slogans is deemed to be clearly political in nature, having historic and militaristic significance,” so the second portion of the slogan “must therefore be removed.”

This year’s tournament will include Russia’s second most populous city of St. Petersburg as one of the 11 host cities for seven matches, including a quarterfinal match, despite its hybrid-war aggression toward neighbors and a systemic doping scandal among its athletes in various national sports.

Ukrainian President Volodymyr Zelenskyy wrote via Instagram that, “The new kit of Ukraine’s national football team is definitely special. It can shock. It features several important symbols that unite Ukrainians from [the easternmost oblast of] Luhansk to [the western oblast of] Uzhhorod, from Chernihiv to Sevastopol. Our country is one and indivisible. Crimea is Ukraine.”

When Russia first complained, UEFA said it had approved of all of the tournament’s participating countries’ uniforms.

“The shirt of the Ukrainian national team (and of all other teams) for UEFA Euro 2020 has been approved by UEFA, in accordance with the applicable equipment regulations,” UEFA said.

The U.S. Embassy in Kyiv threw its support behind Ukraine’s choice of uniform, and said it liked the new kit with a comment on Twitter on June 7. “Love the new look. Glory to Ukraine! #CrimeaisUkraine.” The British Embassy in Kyiv replied to the tweet, “We love it too.”

Ukraine’s Foreign Affairs Minister Dmytro Kuleba also commented on Twitter.
“I really like our team’s new uniform. I can tell those who are fussing because they can’t stand our internationally recognized borders or our official state greeting: We will not allow our national symbols to be insulted!”

Ukraine, in Group C, plays its opening Euro 2020 match against the Netherlands on June 13 in Amsterdam, against North Macedonia in Bucharest on June 17 and against Austria on June 21 in the same city.

The team’s jerseys, which also come in white with gold accents, are manufactured by Joma, a Spanish outfitter for soccer and other sports. To purchase the new jerseys, readers can visit the Joma website in Ukraine, http://joma.com.ua/ukraine.