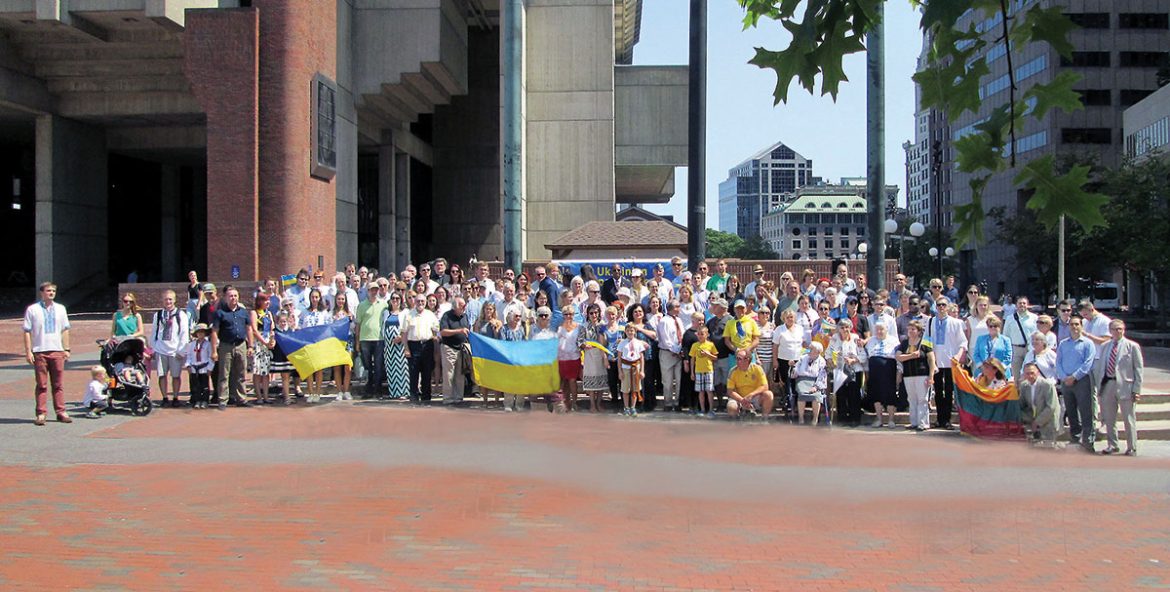 The crowd attending the Ukrainian Independence Day ceremonies in front of City Hall.

BOSTON – As has now become traditional, the Ukrainian American community of greater Boston and eastern New England began its celebration of the anniversary of Ukraine’s declaration of independence on August 24, 1991, with a commemorative ceremony and raising of the Ukrainian flag on the ceremonial flagpole on Boston’s City Hall Plaza.

Representatives of the state, city, clergy, community leaders, the Lithuanian community, and more than 250 Ukrainian Americans – most wearing Ukrainian embroidery – participated. The ceremonies were under the auspices of the Ukrainian Congress Committee of America Boston Branch (UCCA-Boston) in conjunction with a number of local organizations and a host of volunteers.

In addition to the ceremonial flag-raising at Boston’s City Hall, this year’s various events included a reception hosted in the City Council Chambers, a cruise in Boston Harbor, cooking classes on how to make varenyky and holubtsi, formal liturgies offered for Ukraine at all Boston-area churches, and a traditional Ukrainian picnic on the spacious nine-acre grounds of Christ the King Ukrainian Catholic parish.

In all, some 2,000 people attended some part of the celebration, and, it should be noted, a very high percentage of those who took part were fairly young, wore Ukrainian embroidery (vyshyvanky), and were members of the Fourth Wave.

Precisely at noontime on Thursday Brig. Gen. Leonid Kondratiuk opened the ceremony by welcoming everyone and then by calling for a moment of silence to honor those who gave and are giving their lives for Ukrainian independence.

“We give thanks to You for the gift of the part of creation we call Ukraine. We stand in awe before the beauty of the forests, rivers, streams and mountains. We thank You for the rich soil and lands which have been cultivated by the Ukrainian people to nourish and sustain them and the many other nations and people who have shared in Ukraine’s bountiful harvest,” Father Morris prayed.

“We give thanks to you on this day for the many ways that you have blessed the people of Ukraine. … By Your Grace, the Ukrainian people have sustained a quality of life in their homeland and have made contributions to many nations in the diaspora, including the United States and this greater Boston area.” 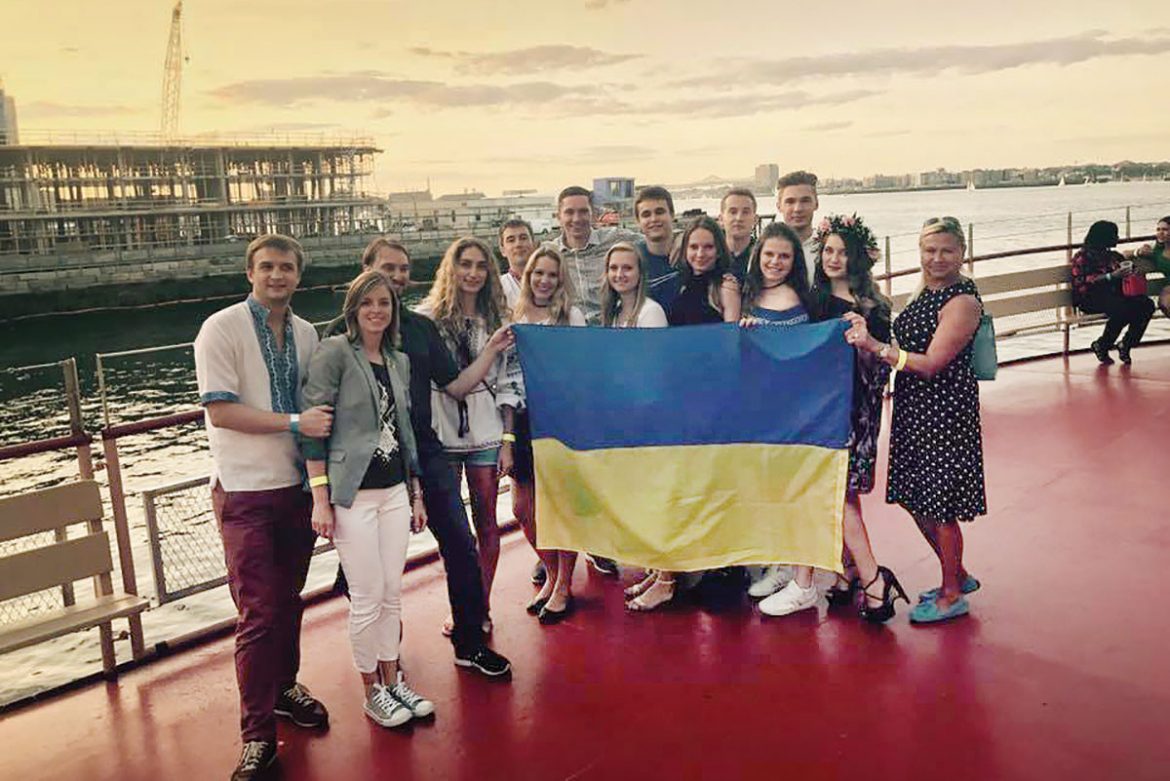 Some of the participants of the boat cruise for Ukrainian Independence Day on the evening of August 24.

“In the fullness of time you willed that the people of Ukraine should be victorious in their long and hard-fought struggles for independence as a nation,” he continued. “Today as we give thanks for that gift, we also turn to You for Your unfailing assistance. Be with Ukraine today as You have always been in its struggle against all adversaries and every attack of visible and invisible powers of evil, lust for power and corruption.”

Sen. Forry began by explaining that, although she is Haitian American herself, her Irish American husband’s niece had married a Ukrainian American from Chicago, and their wedding as well as the baptisms of their three children were all at Christ the King Ukrainian Catholic Church in Boston. Thus, she said, she was really Ukrainian by extension. She went on to say that she values the contributions of Ukrainian Americans into the local civic life as well as their ongoing struggle for freedom.

Mr. Colimon briefly welcomed everyone to the ceremony on behalf of the mayor and then echoed the remarks of Ukrainian Americans contributions to the local area.

Councilor Flaherty spoke passionately about Ukraine’s ongoing struggle to win and maintain its freedom and independence, and cited the number of people who had given their lives or who had been seriously wounded over the past three years in the war in Donbas.

Councilor Annissa Essabi-George, whose grandparents and mother fled Poland before the advancing Soviet army, referred to her personal familial experience and emotionally expressed her solidarity with the Ukrainian community. 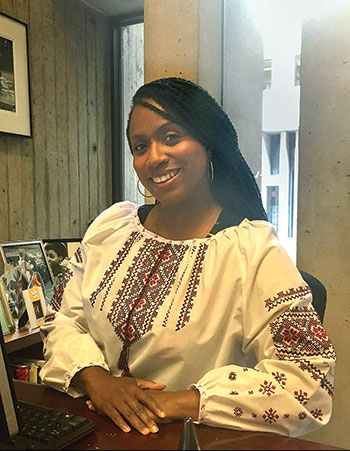 Finally, Councilor Matt O’Malley, who represents the district where both Ukrainian churches as well as the headquarters of a number of Ukrainian American organizations are located, delivered rousing remarks on the Russian invasion of the Donbas that elicited continued applause and two standing ovations.

Miron Kravchuk read the Ukrainian Parliament’s Act of Declaration of Ukraine’s Independence in both Ukrainian and English. He was followed by Paul Rabchenuk, who read the governor’s proclamation.

The benediction was delivered by Father Nalysnyk who prayed in Ukrainian: “…Oh Holy, All-Powerful Triune Eternal God, we, the sons and daughters of Ukraine, who by the will of Your Divine Providence came to this free country to have a fitting and prosperous life, raise our joint prayer with faith and hope, through the intercession of the Most Holy Virgin and all the Saints, blessed and holy martyrs of our native land as well as of our chosen homeland, America, and ask Your Blessing for the Ukrainian nation, its military, and Christ’s Kyivan Church of Volodymyr and Olha.”

He called on God to protect the country from the Muscovite invaders, to heal the wounded and to have mercy on the dead soldiers, and he prayed for unity in this time of peril. He concluded by calling on God to “enlighten the minds of all Ukrainians with His Wisdom; to warm their hearts with His Love; and to firm their will with the strength of His Holy Spirit.”

Following the ceremony, most participants went into City Hall to the City Council’s Piemonte Room for a reception co-hosted by Councilor Essabi-George and UCCA-Boston. Councilor Ayanna Pressley, who had been at another meeting, came to the reception as it was winding down, and spent a few minutes with those who lingered.

That evening, more than 60 people, primarily young and most in vyshyvanky, gathered aboard the Provincetown II for a three-hour cruise of Boston Harbor. The event was arranged and coordinated by Ostap Nalysnyk and co-sponsored by UCCA-Boston.

On Sunday, August 27, both Boston churches offered their main liturgies for Ukraine and the Ukrainian nation. Following the liturgies UCCA-Boston sponsored the traditional Ukrainian Independence Day picnic on the grounds of Christ the King Ukrainian Catholic Parish, drawing more than 1,000 celebrants.

The traditional Ukrainian kitchen offered more than 1,000 varenyky that had been prepared jointly by St. Andrew Ukrainian Orthodox Church and Christ the King Ukrainian Catholic Church and over 500 holubtsi from Christ the King. Gallons of borshch and kapusta, along with rings of kovbasa disappeared, as did mounds of cole slaw, potato salad and various green salads. A variety of open face sandwiches was offered, including those made with “salo” and the parish grill was very active with shashlyk sponsored by the Ukrainian Federal Credit Union. A new offering, Kozak kulish, appeared on the menu this year. Members of the Ukrainian American Youth Association (UAYA) manned dessert tables inside the parish center. Jars of honey from a local Ukrainian apiary were available and, as part of a parish initiative to promote heart-smart, healthier dining alternatives spearheaded by Father Nalysnyk, fresh fruit and vegetable smoothies were also offered.

The picnic continued until dusk and special attention was given to the children and youth. A traditional Ukrainian “khata” (house) was constructed, and the “Kozatski Zabavy” included Kozak challenges, pony rides, clowns, face-painting, balloons, arm wrestling, storytelling, races, art work and songs.