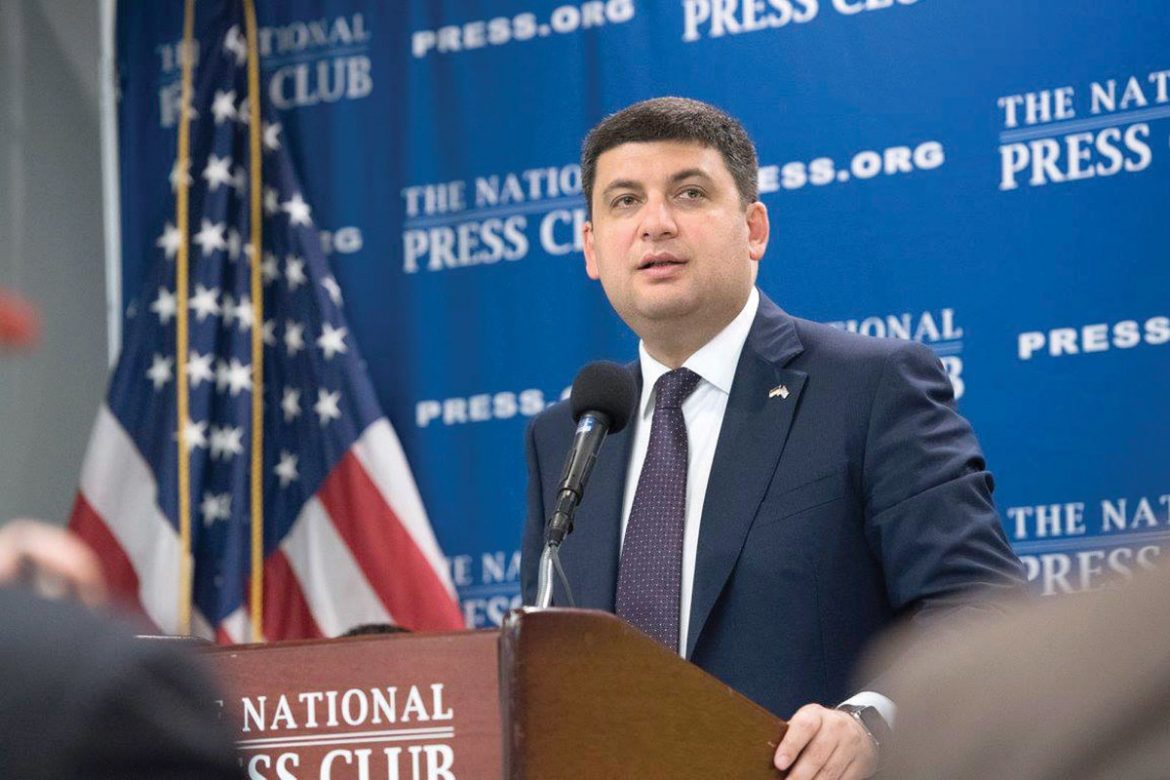 Prime Minister Volodymyr Groysman of Ukraine speaks at the National Press Club in Washington on June 16.

WASHINGTON – Ukrainian Prime Minister Volodymyr Groysman urged Western governments to maintain tough sanctions on Russia until it withdraws its forces from eastern Ukraine and cedes control of Crimea, the Black Sea peninsula that Moscow seized from Kyiv in 2014.

Speaking at the National Press Club in Washington on June 16, Mr. Groysman also heralded his government’s steps toward institutional and economic reforms, saying changes to the customs service, public procurement procedures, and the courts will make the country more attractive to investors.

“Ukraine needs reforms, and my message is that the new government… is ready to reform the country, is ready to lead the changes and implement the changes that are needed for Ukraine,” he told reporters.

Mr. Groysman’s visit to Washington – his first since becoming prime minister in April – comes amid struggling efforts by Kyiv to shore up support financial and technical support for its fragile economy.

Ukraine’s economy has been battered by the precipitous drop in trade with Russia that followed Moscow’s annexation of Crimea in March 2014 after its military seizure of the peninsula. The ensuing war in eastern Ukraine, home to much of the country’s industrial base, also eviscerated the economy.

U.S. and EU backing for Ukraine in its standoff with Russia has included sweeping economic sanctions that have helped drive Russia’s economy into recession. But support for the sanctions in some Western capitals appears to be waning; the European Union prolonged its sanctions for another six months, though rhetoric from some of the bloc’s leaders indicates that they could be scaled back next year.

“The removal of sanctions can be absolutely real if the aggressor demonstrates respect for the international law and leaves the sovereignty of an independent state and returns its troops to its own territory,” he added.

Russia and Ukraine have also been at loggerheads over billions of dollars in debts that each side claims the other owes. Moscow offered Kyiv a $15 billion cash infusion in 2013, in a bid to persuade the government of then President Viktor Yanukovych not to sign an EU Association Agreement.

Moscow had transferred only $3 billion of that infusion before Mr. Yanukovych was ousted amid violent street protests, and Russia has since demanded the money back. Mr. Groysman sought to link the debt issue to the withdrawal of Russian forces from Ukrainian territory.

“In reality, it is Russia that has huge debts to Ukraine, and these debts could be somewhat decreased by the de-occupation of Crimea and withdrawal of Russian troops from the territories of the Donbas,” he said, referring to the region in eastern Ukraine where Russia-backed separatists control territory.

“And I think after these things happen, we could consider settlement of all other financial debts,” Mr. Groysman added.