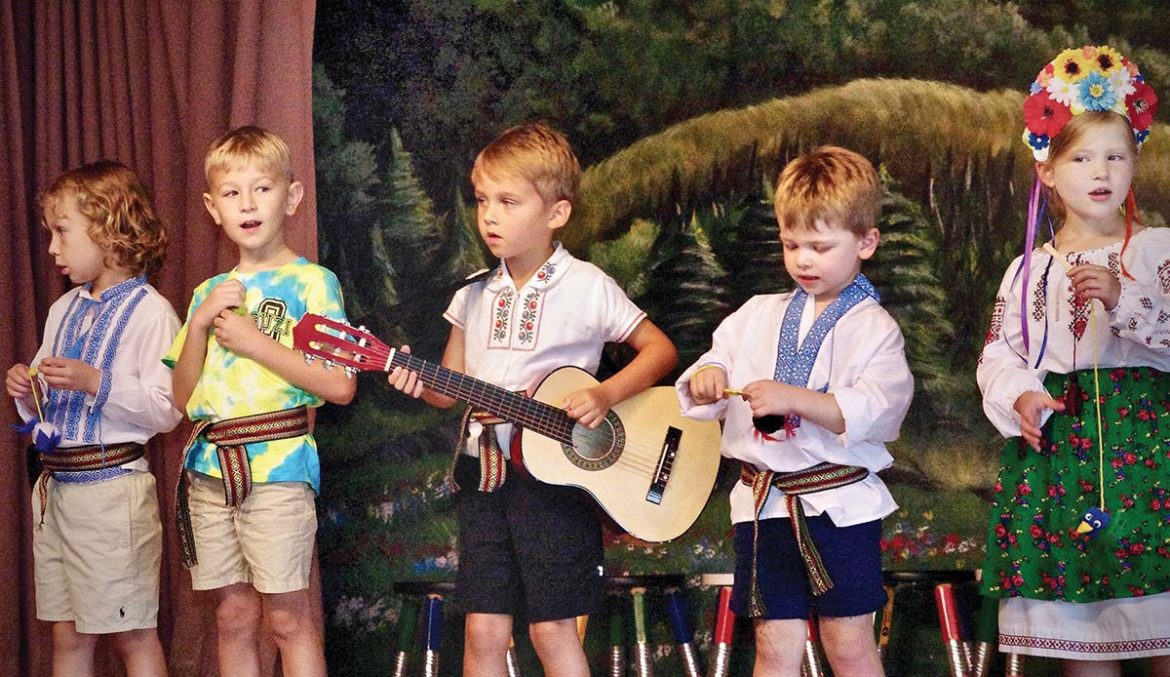 A group of children serenaded their audience during the concluding concert at the 2021 Heritage Day Camp.

KERHONKSON, N.Y. – A special treat for each child attending the 2021 Heritage Day Camp (HDC) at Soyuzivka Heritage Center was having his or her own personal “consultation” with a Ukrainian folk-magic shaman: a so-called “molfar.” This summer’s theme was the Karpaty (the Carpathian Mountains) and its many colorful peoples, including Hutsuls, Lemkos and Boikos.

In Ukraine, “molfars” knew all about herbal medicine in addition to all their other extraordinary powers. The famous Hutsul “molfar” Mykhaylo Nechay had discovered at the age of eight his miraculous ability to stop bleeding. Later, during the filming of “Shadows of Forgotten Ancestors,” director Sergei Parajanov consulted him about Hutsul customs. In 1989, Mr. Nechay was even officially invited to ensure pleasant weather for the “Chervona Ruta” festival.

For five days beginning on July 12, camp director Ksenia Olsen and her all-volunteer staff immersed the children in an imaginative program of arts and crafts, song, dance, games and stories related to the Carpathians.  The staff also organized a concert for parents and friends on the final afternoon of the camp. 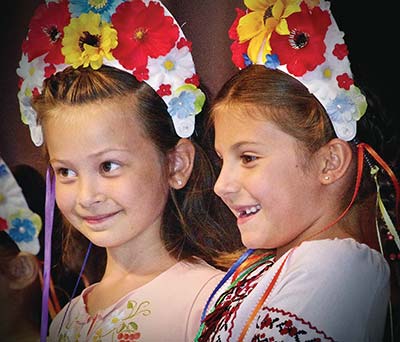 Two campers got to wear traditional Ukrainian costumes during their time at the Heritage Day Camp.

The camp, which is sponsored by the Ukrainian National Association (UNA), has been held annually for 30 years. Most of the children (age 4-8) who take part speak limited Ukrainian, and during the school year they have precious little opportunity to experience other aspects of Ukrainian culture. But when asked by this writer if they had enjoyed their time at Heritage Day Camp, many of the youngsters echoed sentiments of children who said they were “thrilled,” “loved the campfire.”  One child said, “I’ll make sure my little sister comes next year.”

While they might not speak fluent Ukrainian, every child is enriched by experiencing aspects of their culture first hand from camp counselors and by learning to appreciate their heritage. And many of the children said the camp was great fun. 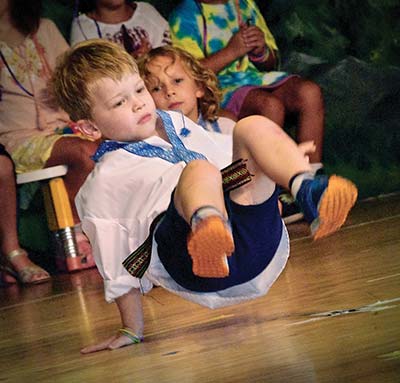 A camp member takes a stab at performing the Hopak.

A favorite part of the week for the children is always arts and crafts; this year, campers took turns decorating jewelry boxes and sculpting miniature stylized Hutsul animals – from cheese!

At the concluding concert, the folk dances presented a variety of athletic solos, duos, foursomes and the entire group of happy little campers, all taught by Tanya Zahalak. Anna Kukuruza provided the colorful and authentic costumes. Several songs were humorous in nature, as reflected by the energy and evident enjoyment of the singers. Games and stories over the five days were led by Larissa Kryl and Halia Lodynsky.

But what of the magical Kerhonkson “molfar”? Little Solomiya Mokrytski was mystified by how the marvelous oracle knew her sister’s name, and Bohdar Herman confided that he couldn’t fathom how the shaman uncovered that Bohdar “likes water games, and his sister is great on the monkey bars.” Well, now … and how do you suppose the “molfar” could divine all that?