And, beginning with the spring of that year, the problems of the empire began to spiral out of control. The German and Austrian armies not only stopped the advance of the Russian armies but began their own advance and took over Poland, all of Galicia and part of the Baltic seacoast. Finland was in revolt, and the major nationalities throughout the empire, particularly Ukraine, were restive.

In the cities, food shortages were developing because the country’s infrastructure was severely overextended. Workers were underpaid, and living conditions were squalid. Protests broke out, strikes followed. All sorts of groups and political parties vied for power. To deepen the strife and confusion, the Germans even transported some Communist leaders, including Vladimir Lenin from Zurich to St. Petersburg, in the hope of creating utter confusion and taking Russia out of the war.

Following an increasing series of upheavals, Tsar Nicholas II abdicated, ending more than 300 years of rule by the Romanov dynasty and placing responsibility for governance in the hands of a provisional government led by Alexander Kerensky. However, within a few months, the Bolsheviks, led by Lenin, managed to overthrow Kerensky, seize control and begin to impose communism on the country.

In Ukraine, the Central Rada had been formed in reaction to the ongoing events in the empire and in November 1917 it proclaimed the Ukrainian National Republic in response to the Bolshevik coup in St. Petersburg, by then Petrograd, and it managed to avoid an attempt at a similar Bolshevik coup in Kyiv. Timid at first, the Rada stressed that it only wanted autonomy for Ukraine and that there was to be a restructuring of the empire on a federal basis. However, events moved fast and in January 1918 the Rada issued the Fourth Universal, a complete declaration of Ukraine’s independence.

This triggered an almost immediate reaction from the Russian communist state and an invasion from both the north and the east. A communist Ukraine was proclaimed by the invaders and within months its provisional capital was set up in Kharkiv. War dragged on for four years, and, although the Ukrainian government even allied itself with Poland, at one point the Soviet armies almost reached the gates of Warsaw. By 1922 the Bolsheviks had succeeded in taking over Ukraine, even though there were still sporadic uprisings, and made it one of the four founding republics of the new Soviet Union.

Although under the Bolsheviks and Soviets, Ukrainians experienced the horrors of communism, collectivization, famine, de-nationalization, deportation and colonization to the point of becoming second-class citizens in their own country, “the genie of independence was now out of the imperial bottle, and no force on earth could put it back,” as noted historian and director of the Harvard Ukrainian Research Institute (HURI) Serhii Plokhy, Mykhailo Hrushevsky Professor of Ukrainian History, writes in his book “Lost Kingdom.” And the legacy of the 1917 events endures. 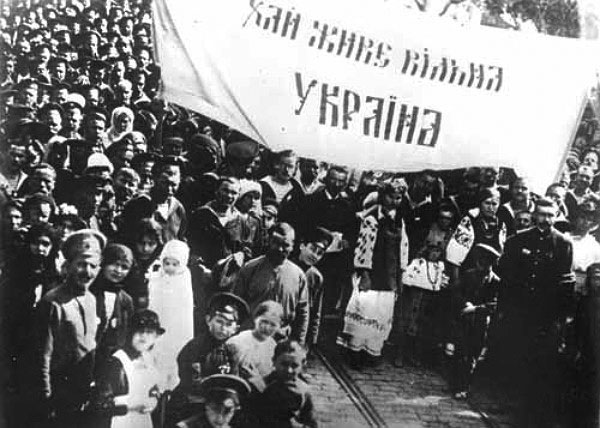 A demonstration near the Kyiv Duma during the summer of 1917 is seen in this photo from the Internet Encyclopedia of Ukraine.

“Since Ukraine’s independence in 1991, a number of researchers have combed its national archives trying to construct an historical narrative with instrumental support from the Ukrainian Research Institute,” noted journalist and Pulitzer Prize-winning author Anne Applebaum points out. “Many of them, including myself, have also specifically looked at the figures for the Holodomor.”

“Though Russia views any discussion of the Holodomor as a threat, an understanding of its history can inform our understanding of Russia today. It is important to remember that the Russian state that exists now has decided to see itself as the inheritor of this legacy – and it didn’t have to,” Ms. Applebaum says. “Memories of the Famine underlie much of the current tension between Russia and Ukraine. [Vladimir] Putin, like his predecessors, particularly Stalin, sees Ukraine as something that could destabilize Russia.”

Now a century later, Ukraine’s drive for independence and self-determination is again facing acid tests. The Orange Revolution, the Euro-Maidan, Crimea, the ongoing war in the Donetsk and Luhansk oblasts in the east, and even the changes in the language laws giving preferential treatment to Ukrainian in education and media highlight the people’s determination to reject subjugation by Russia and embrace their own vision for Ukraine.

“As Putin tries to reclaim Russia’s global status and power with regular ‘reintegration projects’ once again, Ukraine figures prominently in these plans,” Prof. Plokhy emphasizes. “That’s why they’re prepared to fight, that’s why they’re prepared to really put on the line their relations with the West as a whole. It was the case in 1917, and unfortunately, this is the case a hundred years later.”

To commemorate this turning point in Ukrainian history, the Ukrainian Research Institute at Harvard University has organized a series of events examining the revolution and its consequences for and in Ukraine. The series, which will be presented throughout the semester, offers a fresh look at one of the most significant turning points in Ukrainian history by some major international scholars under the title “Ukraine in the Flames of the 1917 Revolution.” At the same time, HURI also collaborated with Harvard’s Davis Center for Russian and Eurasian Studies on several talks, as well as a conference on the Russian Revolution, which was co-organized by Prof. Plokhy and includes talks on Ukraine.

Among the HURI series presentations are the following:

Dr. Akulov will look at the Hetmanate of Pavlo Skoropadsky and point out that, although he is seen as one of the champions of the national cause of Ukraine and tirelessly fought the Bolshevik onslaught from Russia throughout his time in office, his vision for the future was flawed and problematic for most Ukrainians of the time, as it still is today. As hetman, Skoropadsky clearly developed a vision of Ukraine as part of a united Russia and actively took steps to work for its restoration. Dr. Akulov will point out that Skoropadsky’s ultimate decision to lead Ukraine into a coalition with the anti-Bolshevik pro-imperial White movement triggered the anti-Hetmanate uprising that led to his unforeseen downfall. 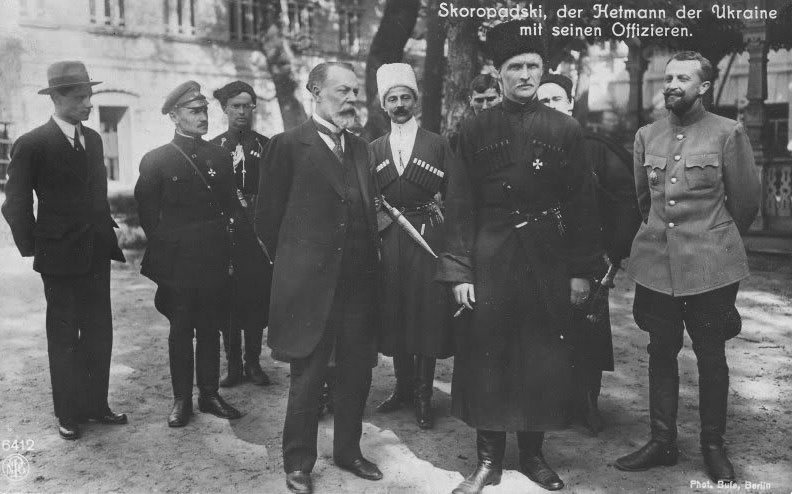 Pavlo Skoropadsky (front, center) is seen in this photo from the George Grentham Bain Collection in the Library of Congress.

Prof. Graziosi will look at the “many 1917s behind the traditional February vs. October, Reds vs. Whites ‘pairs’ ” that have come to form the canon of Western historiography. “In fact, ‘the October’ was plural, even in Russia proper; the St. Petersburg differing from the Moscow, or the Siberian one,” Prof. Graziosi notes. In fact, there were many Octobers throughout the length and breath of the Russian Empire. What happened in Finland and the Baltic countries differed from what happened in Ukraine, Central Asia and Siberia. “And it was seen, understood and lived differently in the cities, in the trenches, among workers, peasants, peasants, soldiers, and intellectuals.”

“These multiple 1917s were immediately present in the minds and writings of contemporaries, and they continued to live, grow and differentiate in the following decades, both within and without , in major political, intellectual, and historiographical interpretations,” he explains. After 1991 and the break-up of the Soviet Union, this multiplicity of “1917s” impacted the successor states. Prof. Graziosi will conclude by looking at how this impacts their relations not only with the West but with other major countries on the rim of the former Soviet Union, such as India and China.

The following were earlier presentations in the series.

• Wednesday, October 18, a screening of the movie “Arsenal: Ukrainian Revolution Portrayed by a Counterrevolutionary” (1929) directed by Alexander Dovzhenko.

The presentation and discussion were led by Dr. Yuri Shevchuk, lecturer in the Department of Slavic Languages, Columbia University. The dual goals of the movie were to solidify Dovzhenko’s place in the new Soviet reality and ostensibly “to celebrate and glorify the Bolshevik occupation of Ukraine, to present it as the will of the Ukrainian proletariat and a historical inevitability,” Dr. Shevchuk noted. However, “the message of the film often undermines the legitimacy of the revolutionary conquest of Ukraine by posing the question of whether the Bolshevik victory was worth the horrific and enormous suffering it caused the people.”

The journalist and Pulitzer Prize-winning author discussed the findings of her new book “Red Harvest: Stalin’s War on Ukraine” that the main cause for the Holodomor was Stalin’s fear of Ukraine’s self-identity and drive for independence, which had been unleashed during World War I and never successfully put to rest by any Russian government since that time. Yes, there were crop failures in the Soviet Union in 1932-1933 caused by collectivization and peasant unwillingness to follow the will of the Soviet government, but in Ukraine it was different. There, the government deliberately deprived the populace of all foodstuffs and surrounded the countryside by troops in such a way that escape was made impossible. Within six months almost 4 million Ukrainians died simply because they were Ukrainians. The message was clear to Ukrainians: conform. Laws were passed that made mentioning the Holodomor a crime. Russians were brought in to fill in population gaps. Efforts to Russify the country proceeded apace.