Presenters of the 2017 Holodomor Education Conference.

WINNIPEG, Manitoba – Educators from across Canada, the United States and Ukraine assembled in Winnipeg, Manitoba, to attend the second Holodomor Education Conference: “Education–Awareness–Action” (HEC-2017) on May 5-7, at the Canadian Museum for Human Rights (CMHR).

The conference was organized by the Holodomor Research and Education Consortium (HREC) of the Canadian Institute of Ukrainian Studies (CIUS) at the University of Alberta, and held in cooperation with the Canadian Museum for Human Rights. The organizing committee included Valentina Kuryliw, director of education (HREC) and committee chair, Sophia Isajiw and Oksana Levytska of Toronto, and Val Noseworthy, Irka Balan, Dr. Orest Cap and Dr. Denis Hlynka of Winnipeg. 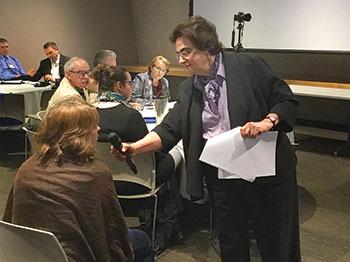 The HEC-2017 conference brought together 120 education professionals, who teach from kindergarten to the university level. Educators of senior grades made up approximately half of the participants, while the primary and middle years were well represented. Participants shared a desire to learn about new approaches and innovative strategies from 25 conference presenters, who spoke on how to teach human rights, social justice and the Holodomor in their classrooms.

They were especially grateful for the handouts and suggestions for implementing the teaching of this often forgotten topic in their curricula. It was rewarding to observe that many of the participants came from diverse ethnic backgrounds with a strong interest in human rights and genocide.

Valentina Kuryliw delivered the opening remarks. John F. Young, the president and CEO of the Canadian Museum for Human Rights, welcomed the gathering to the museum. James Bezan, member of Parliament for the riding of Selkirk-Interlake-Eastman in Manitoba, who introduced in 2008 the bill recognizing the Holodomor as genocide, spoke movingly on the reasons for this recognition.

During the panel presentation on “Human Rights and the Holodomor.”

The keynote speaker, Dr. Joyce Apsel, clinical professor in the Liberal Studies Program at New York University and president of the Institute for the Study of Genocide, spoke eloquently about “Genocide, Human Rights and the Holodomor: Teaching Human Rights and Wrongs in the Classroom.” She stressed that the Holodomor and human rights need to be relatable and, therefore, made more personal for students.

Dr. Richard Hechter, acting department head of curriculum, teaching and learning, Faculty of Education, University of Manitoba, moderated a very lively and diverse panel discussion on “The Teaching of Human Rights and the Holodomor.” It included presentations by Dr. John R. Wiens, dean emeritus and professor of educational administration, Faculty of Education, University of Manitoba; Lise Pinkos, manager of education programs, Canadian Museum for Human Rights; and Antonio José Tavares, diversity education and international languages consultant for the Instruction, Curriculum and Assessment Branch of Manitoba Education and Training. Mr. Tavares gave an insightful and grounded talk on “Holodomor and Genocide Education with Children of Refugee and War-Affected Backgrounds.” 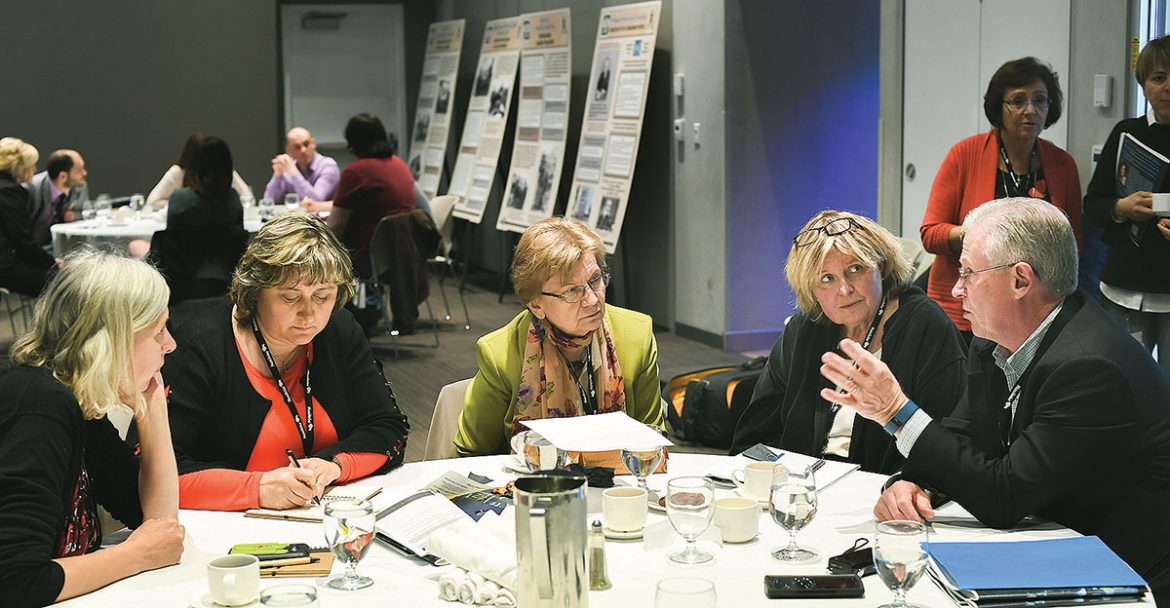 A group discussion during the Holodomor Education Conference.

In post-conference remarks he said, “As someone who did not grow up with stories of the Holodomor, but who is teaching the Holodomor to students, this conference was a most important learning experience. I gained valuable information and insight from the many presenters. It has also been amazing to become part of the community of people who are Holodomor and human rights activists and educators in North America.”

Lana Babij, a librarian and Holodomor website manager and coordinator of the Holodomor Educators Network in the U.S.A., rounded out the panel by expertly addressing “The Challenges of Terminology and Resources” on the Holodomor – a very timely topic to educators.

The methodology sessions rounded out the conference by providing practical hands-on suggestions for implementing human rights and the Holodomor in school curricula. Natalia Onyschuk shared her expertise at the primary level, showing how song, dance, art and stories can be used to teach a difficult and sensitive topic. Ms. Pinkos and Ian Martens showcased the museum’s new lesson on the Holodomor for the middle years, while Jeff Kozak of Winnipeg presented his best practices in teaching the Holodomor for Grades 5-8. 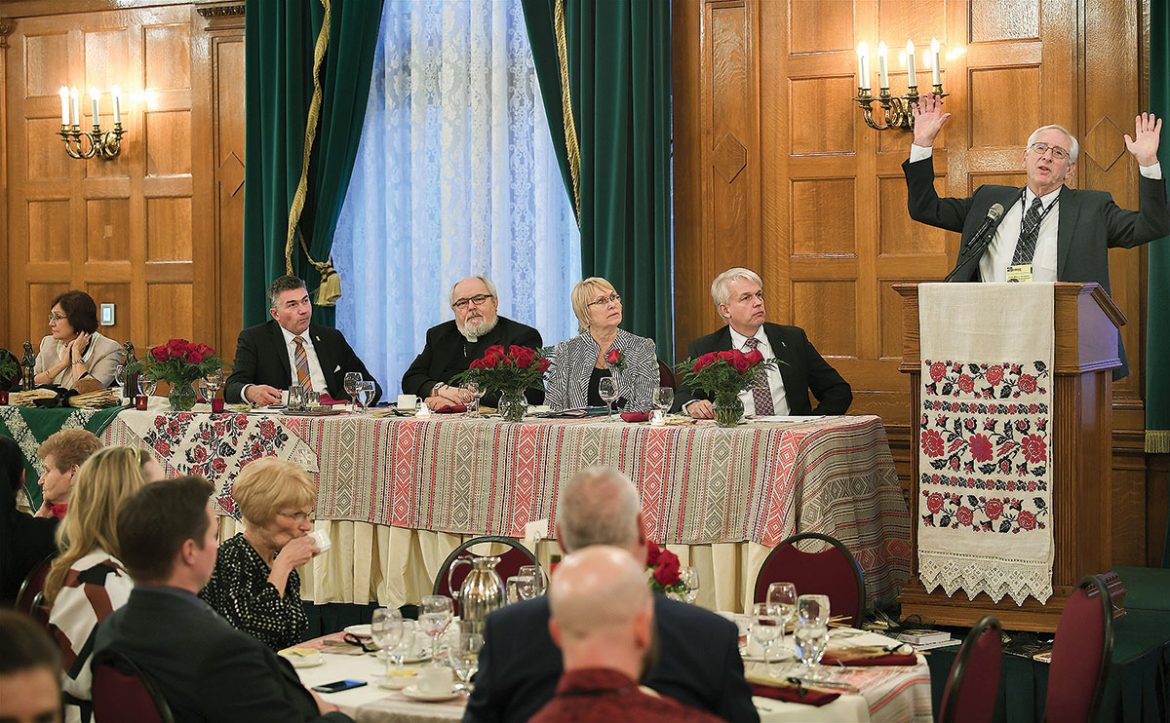 Tamara Kowalczyk shared her expertise and experience in teaching the Holodomor within a genocide course at the high school level, and Nadia Prokopchuk and David Katzman shared handouts and information on an innovative new online human rights resource, titled “Voices into Action,” whose fifth chapter features lessons on the Holodomor.

On Sunday, the conference ended with two presentations. The first, by Ms. Kuryliw, emphasized the latest resources and activities on the Holodomor, including websites, DVDs and print materials available for educators and students. The 20-page excerpt she also shared from her soon-to-be published 300-page educator’s manual, “Holodomor in Ukraine, the Genocidal Famine 1932-1933: Learning Materials for Teachers and Students” was especially helpful because it is chock-full of teaching materials for students, lessons and projects.

The second presentation was led by Dr. Cap and Dr. Hlynka of the Faculty of Education at the University of Manitoba and dealt with the problems of finding accurate digital information on the Internet and social media, and the use and abuse of such information when studying the Holodomor, social justice and human rights issues.

A commemorative dinner was held at the Fort Garry Hotel for 140 participants and dinner guests, who were treated to a dinner and program at which 10 local Manitoba Holodomor survivors presided. Survivor Sonia Kushliak gave a stirring address before a moment of silence was observed.

Metropolitan Lawrence Huculak of the Ukrainian Catholic Archeparchy of Winnipeg, and the Very Rev. Alexander Harkavyi, pastor of St. Mary the Protectress Ukrainian Orthodox Cathedral, sang the prayer before the meal and at the closing.

The evening’s special guest speaker was the renowned academic Dr. Norman Naimark, Robert and Florence McDonnell Professor of East European Studies at Stanford University, who spoke on “The Holodomor in the History of Genocide.” In his message, he stated that the bad news is that genocide has taken place since the beginning of time; the good news is that we are getting better and faster at responding to genocides, and that there is still hope for mankind.

Reactions to the conference include that of Swan Valley Regional Secondary School’s Meredith McGuinnes, who described it as “fabulous and inspiring; very important to me as the granddaughter of a Holocaust survivor to be able to share the Holodomor and the importance of discussing genocides in my Grade 9-12 social studies classes in Northern Manitoba.” 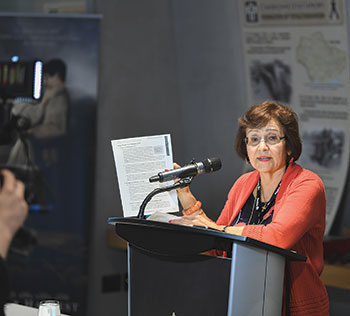 Larry Mikulcik, a curriculum coach for Horizon School Division in Humboldt, Saskatchewan, summarized the importance of the conference to his work this way: “First and foremost, I have to say how much I enjoyed the conference this past weekend, and also how much the teachers in our school division will benefit by the information and resource connections I am able to bring back to them. I also look forward to incorporating a great deal of the Holodomor Genocide information into our annual symposium for students.”

Dr. Joyce Apsel surmised, “I very much enjoyed being at the conference, learning from all the teachers and hearing Norman Naimark’s important comments. It was such a special, rewarding, educational experience for all.”

Sophia Isajiw is assistant to the director of education at the Holodomor Research and Education Consortium.