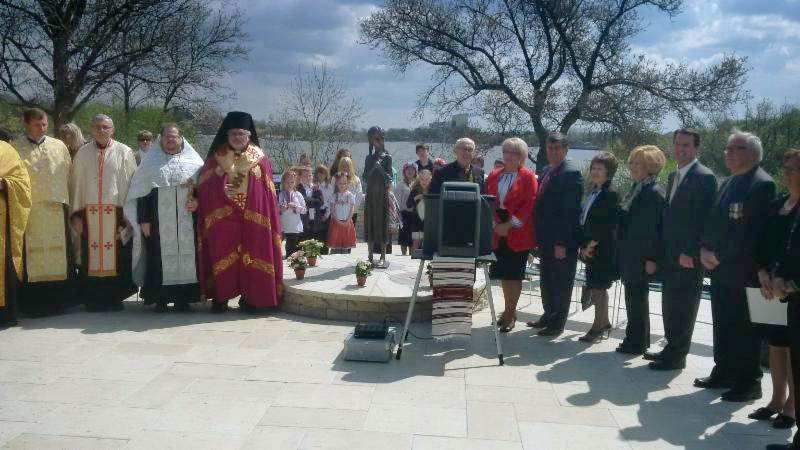 Political and community leaders of Saskatchewan at the unveiling of the Holodomor monument, “Bitter Memories of Childhood,” on the provincial legislature grounds in Regina.

REGINA, Saskatchewan – A Holodomor monument called “Bitter Memories of Childhood” was unveiled here at the Saskatchewan Provincial Legislature on May 12. The memorial is a bronze statue of a little girl with a sheaf of wheat and is made from the same cast as the one in Kyiv on the grounds of the National Holodomor Museum. It is the work of sculptor Petro Drozdowsky.

“This new addition to the Saskatchewan Legislative Building precinct will foster greater awareness of the Holodomor and provide a permanent place in our province for everyone to reflect upon the terrible tragedy,” said Deputy Premier Ken Krawetz, according to a story filed by Global News. “It will honor the memory of those who perished and the legacy of those who survived, including many who found refuge in Saskatchewan.”

Representatives of national leadership of the Ukrainian Canadian Congress (UCC) participated in the unveiling of a Holodomor monument. “The memorial and its location are very tasteful and will serve to educate generations to come,” stated UCC National President Paul Grod, who spoke at the unveiling.

The blessing of the Holodomor monument and memorial service on the legislature’s grounds were emceed by Ken Mazur and included statements by Saskatchewan Lt. Gov. Vaughn Solomon Schofield, Sen. Raynell Andreychuk and Mayor Michael Fougere, and a keynote address by Deputy Premier Ken Krawetz. 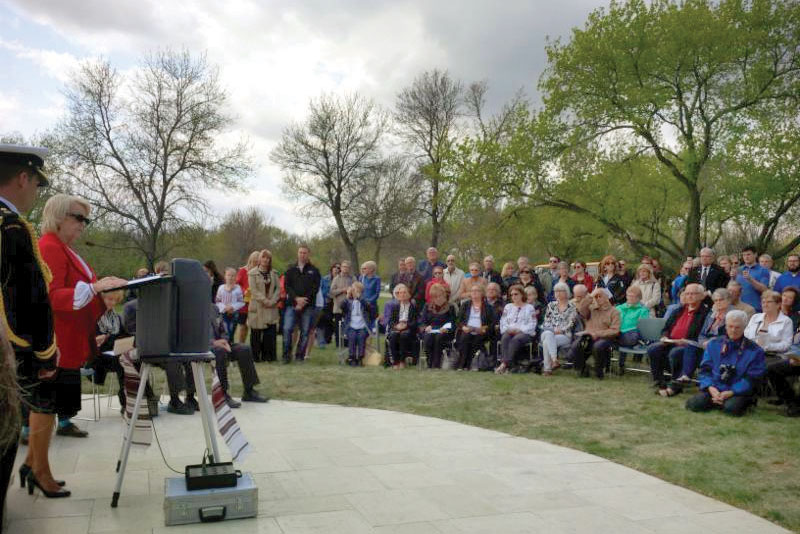 Gregory Akulov also addressed the gathering as a representative of Holodomor survivors. “Both my parents, Olga and Victor, were innocent child victims and witnessed the horrific crime against humanity,” Mr. Akulov explained. “The spring of 1933 in Kyiv was the horror of the kilometers-long line-ups for bread. Thousands of people were falling and dying of starvation right on the streets.”

Saskatchewan was the first province in Canada to recognize the Holodomor as genocide in May 2008. Some 130,000 Canadians living in the province identify themselves as having Ukrainian ancestry.

While in Regina, the UCC delegation, which included National President Grod and Executive Director Taras Zalusky, also attended a meeting of the Saskatchewan Ukraine Relations Advisory Committee and held meetings and site visits in preparation for next year’s 25th triennial Congress of Ukrainian Canadians.

“I am confident that given the great team assembled, the 2016 triennial congress in Regina will be an amazing opportunity to mark the 75th anniversary of the UCC and the 125th anniversary of Ukrainian settlement in Canada,” stated Mr. Grod.

(With additional information from Global News and CKRM.)