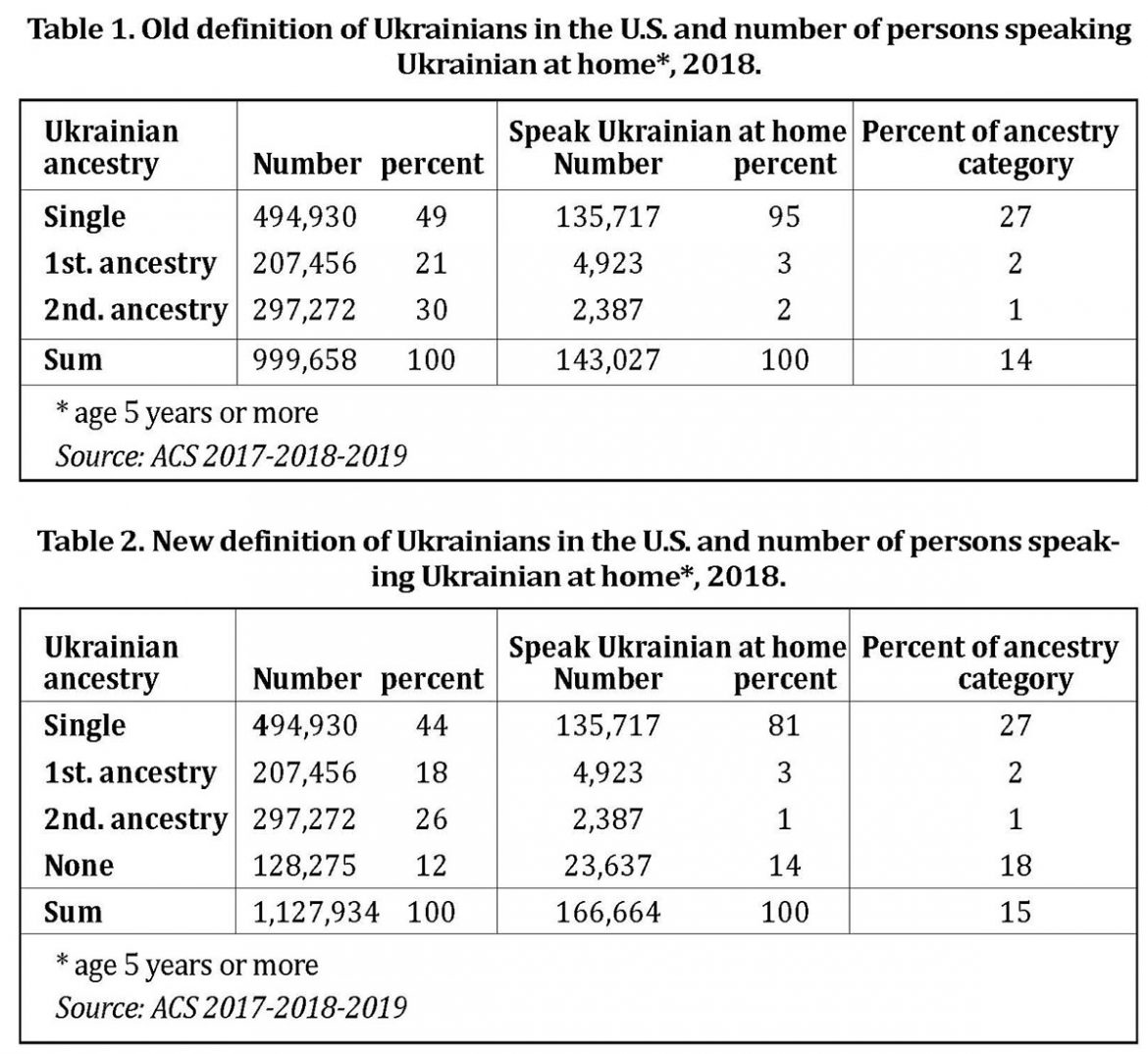 Two topics are addressed in this article. We propose a new definition of the concept “Ukrainian in the U.S.” and describe a data-based methodology that may help estimate the number of illegal immigrants from Ukraine in the United States.

There are two ways of defining members of an ethnic group living abroad: descendancy (immigrants from the mother country and their descendants) and self-identification (the person determines their ancestry). The descendancy definition is problematic for several reasons. First, except for a brief period in the early 1990s, Ukraine did not exist as an independent country until 1991. Second, in the early years of migration from Ukraine to the U.S., “Ukraine” as a country of origin and “Ukrainian” nationality or ancestry were not evident in the minds of most immigrants (for more on this topic, see the January 10 article by this author in The Ukrainian Weekly). Third, for many years the country of “Ukraine” and “Ukrainian” ancestry or ethnicity were not listed as separate categories in the U.S. census and Immigration Statistics. More generally, a definition based on descendancy does not provide objective criteria for deciding when immigrants’ descendants became totally assimilated. Another complication is multiple ancestry due to ethnic intermarriage.

The Center for Demographic and Socioeconomic Research of Ukrainians in the U.S. (the Center) at the Shevchenko Scientific Society adopted the self-identification definition of “Ukrainian in the U.S.” This decision was based on two factors: a) the definition avoids the problems of the descendancy definition; b) data needed to apply this definition was available.

A question on a person’s ancestry or ethnicity was added to the 1980, 1990 and 2000 censuses, and incorporated in the yearly American Community Survey (ACS) since 2015.

A question on language spoken at home was also added to these censuses and ACS, providing a measure of language assimilation. Two critical changes in official U.S. statistical systems included the following: a) starting with the 2000 census, the Bureau of the Census added “Ukraine” to the list of countries of birth and origin in the census and then the ACS; b) “Ukraine” was added in 1994 to the list of countries of birth and citizenship in Immigration Statistics. Previously, both statistical systems listed Ukrainians in the category “Other USSR/Russia.”

Note that this definition includes persons who also qualify as members of other ethnic groups. For example, a person with German and Ukrainian ancestry could also be counted as a member of the German ethnic group in the U.S.

Table 1 presents the composition of Ukrainians in the U.S. in 2018 according to the self-identification definition.

An updated estimate of the number of Ukrainians in the U.S.
This definition is implicitly based on the concept of Ukraine as a nation-state, with the Ukrainian ethnic group as the dominant nationality. It does not recognize persons of non-Ukrainian ancestry born in Ukraine or citizens of Ukraine as “Ukrainians in the U.S.” As pointed out by an increasing number of historians and political scientists, this conception of Ukraine is not consistent because Ukraine is a multiethnic state. We propose an expanded definition of the concept “Ukrainian in the U.S.” that considers the multiethnic composition of Ukraine’s population. The definition adds two new groups with non-Ukrainian or undeclared ancestry: born in Ukraine and speaks Ukrainian at home.

Table 2 presents the structure of Ukrainians in the U.S. in 2018 according to this new definition. The two new groups are included in the “none” category.

The number of Ukrainians in the U.S. increases by 128,000 to a total of 1.128 million in 2018. The 128,000 with non-Ukrainian ancestry represent 12 percent of all Ukrainians in the U.S. Close to two-thirds of the two new groups, 61 percent, speak Russian and only 14 percent speak Ukrainian at home. The great majority of them, 113,000, were born in Ukraine; the 15,000 not born in Ukraine speak Ukrainian at home. It is important to note that among the persons in the “none” category, 60 percent did not declare any ancestry. This means that they are not sure of their ancestry or perhaps did not understand the census question.

Estimation of the number of illegal immigrants from Ukraine residing in the U.S.
I have been repeatedly asked how many illegal Ukrainian immigrants there are in the U.S., and my answer has always been “nobody knows.” Recently, while analyzing U.S. immigration statistics, I realized that we might have an answer to this question.
There are two primary sources of official statistics on Ukrainians in the U.S.: a) demographic and socioeconomic data from the census and ACS; b) immigration statistics from the Office of Immigration Statistics of the Department of Homeland Security. We have made extensive analyses of the first set of data, but the immigration data have been barely analyzed. There are two types of immigration statistics: permanent immigrants and nonimmigrant admissions (visitors on a temporary visa). Only data on permanent immigrants are posted on the Center’s website: http://www.inform-decisions.com/stat/. A closer examination of the data on nonimmigrant admissions from Ukraine, specifically with I-94 visas, shows that they can be used to estimate the number of illegal Ukrainian immigrants in the U.S.

I-94 visas cover a wide range of categories, like tourists, temporary visitors for business, all kinds of temporary workers (from agricultural workers to athletes and artists), students, diplomats, etc. Yearly data on citizens of Ukraine arriving in the U.S. on I-94 visas are available starting in 1994. Their total number has grown steadily from 18,500 in 1994 to 130,000 in 2019. Within all visitors on I-94 visas, there are three categories of visitors whose members may have traveled with the intention of staying in the U.S. and hoping to obtain legal status eventually. These categories are tourists and temporary visitors for business, temporary workers, and students and exchange visitors.

Tourists and temporary visitors for business is the largest of the three categories and comprises 79 percent of their sum. Yearly numbers of this category have been increasing steadily from 8,000 in 1994 to 99,000 in 2019. The graph illustrates the dynamics of the other two categories: temporary workers and students and exchange visitors. The temporary workers’ program started in 1996 with 1,000 and grew steadily to almost 5,000 in 2002. There was a sharp decline between 2002 and 2004, and then the numbers resumed their increase, reaching a maximum of over 9,000 in 2019.
The yearly number of students and exchange visitors started at about 2,000 in 1994 and grew steadily to a maximum of almost 14,000 in 2008. Starting in 2009 their numbers have experienced a steady decline and reached a low of 6,000 in 2019. This decline was interrupted by two increases in 2019 and 2015. These are general descriptions of the trends in these two groups. The immigration data on these two groups have more detail and merit a more in-depth analysis. 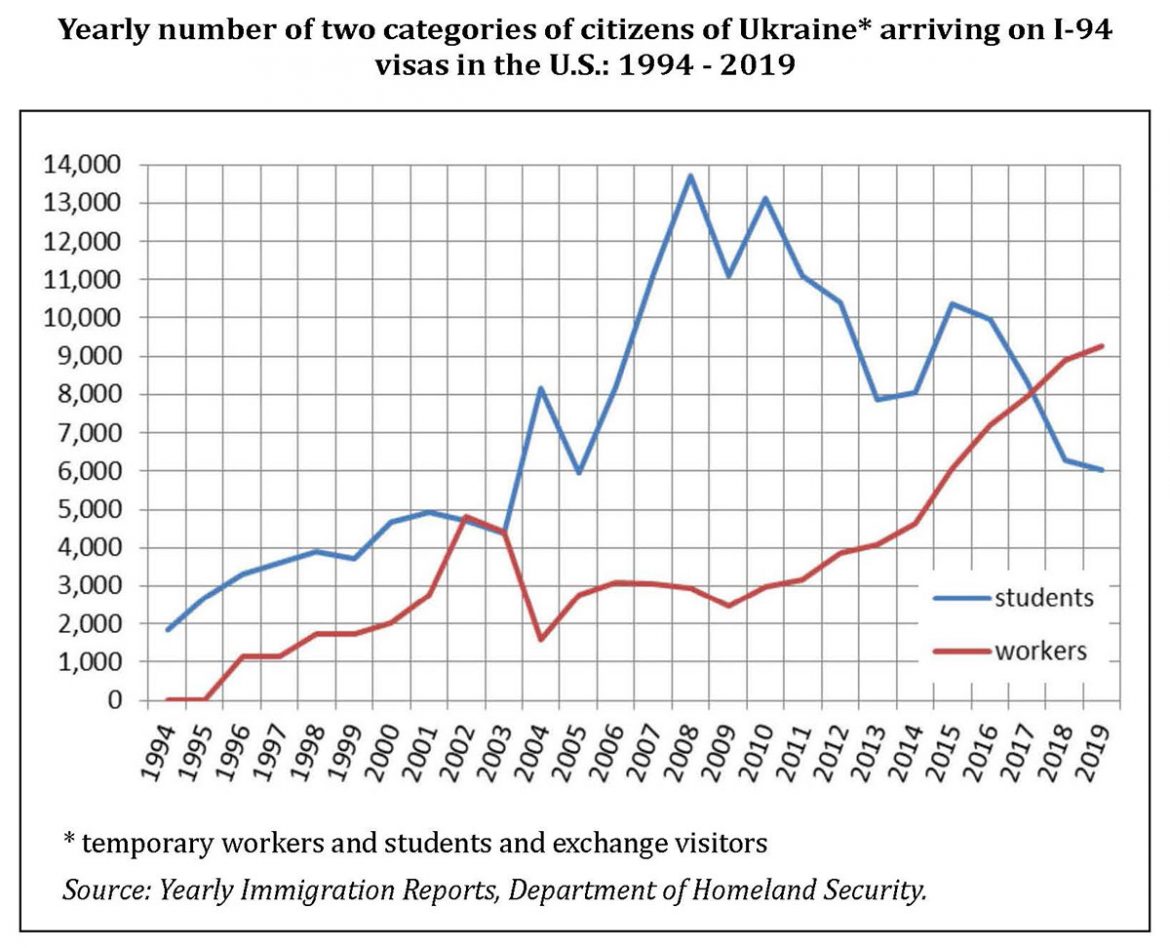 Table 3 shows the calculations for estimating the number of illegal immigrants and the total number of Ukrainians in the U.S. First, we add all the yearly visitors between 1994 and 2019 in the three groups that are likely to have persons planning to stay illegally in the country; they total 1.364 million. We assume that the proportion of visitors in these three categories who decided not to return to Ukraine may vary between one-fourth and one-half. We apply these proportions to the total of 1.364 million and add the 1.128 million estimated using the self-identification definition. This sum gives us a range of 1.5 to 1.8 million for the total number of legal and illegal Ukrainians in the U.S.

The estimated number of Ukrainians in the U.S. who are U.S.-born or immigrants with declared Ukrainian ancestry (probably most immigrants with legal residency status) is reasonably reliable. The Center is in the process of updating the data on its website, http://www.inform-decisions.com/stat/, to the year 2018, and all the data are based on this new definition.

Estimates of the number of illegal immigrants are more problematic for two reasons: the nature of immigration statistics and the uncertainty of a range instead of a number. U. S. immigration data have at least two problems. First, the system records only arrivals in the U.S.; it does not provide data on departures. Second, the system does not register multiple entries by the same person. The result is that some of the visitors are counted more than once, and the data is likely to overestimate the number of unique visitors. The proportions of visitors who decided to stay are educated guesses. The 25 and 50 percent assumptions probably provide minimum and maximum estimates of the number of illegal Ukrainians in the U.S. We conclude that it is unlikely that the total number of Ukrainians in the U.S. is higher than 1.8 million and is probably closer to 1.5 million.

Oleh Wolowyna is Director of the Center for Demographic and Socio-economic Research of Ukrainians in the U.S. at the Shevchenko Scientific Society, and research fellow at the Center for Slavic, Eurasian and Eastern European Studies at the University of North Carolina at Chapel Hill. He can be reached via email at olehw@aol.com.