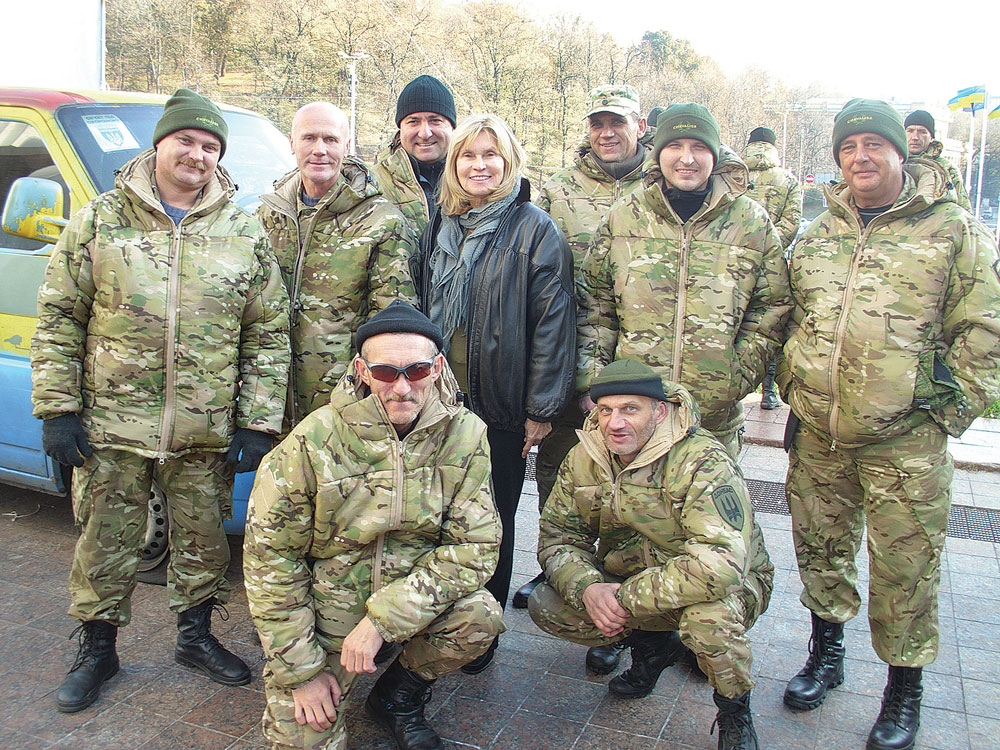 Ulana Mazurkevich with members of the Donbas Battalion, who proudly told her that “Franko” (Marko Paslawsky) served with them.

When I was in Ukraine for the parliamentary elections of October 26, I observed a Kyiv that was quiet and somber with reminders of the war everywhere, patriotic billboards calling for the support of the military, billboards proclaiming, “Glory to Ukraine” and “Glory to her heroes,” transparent plastic boxes asking for donations for the military placed at restaurant entrances, Ukrainian television stations constantly running news on the war in the east.

The barrage of coverage of the war on the Ukrainian stations is never-ending. In keeping with the patriotic fervor, Ukrainian TV stations post on the side of their screen the blue-and-yellow flag of Ukraine with the motto “One country.” 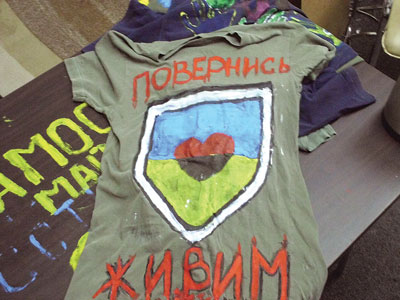 Graphics on T-shirts drawn by schoolchildren.

People are constantly signing up to join the all-volunteer battalions. My taxi driver bemoaned the fact that he was rejected because of his age – he is 60. I met a young girl, Dasha Mikailyuk, and her boyfriend, Ivan Gogiyl. Ivan volunteers at the office of the Donbas Battalion. He is an artist and paints patriotic graphics on T-shirts that they sell to provide funds for the battalions. He told me that he came from Donetsk a year ago, when the Maidan started, and has stayed to help with the war effort. He further informed me that volunteers go to schools and have children create graphics on T-shirts which they deliver to the soldiers at the front as a show of support from the children of Ukraine. The graphics drawn by the children are quite telling: one, with a heart in the center, says “Return alive,” another says “Glory to Ukraine,” still another says “Death to the enemy.”

I was invited to attend a special press conference where the battalion commanders Semen Semenchenko, Yurii Bereza and Andrii Teteryk , who had just returned from the battlefields in the east spoke about the war. The room was packed with TV cameras and reporters. Prior to the start of the press conference the moderator spelled out the rules. He did so in Russian, so I raised my hand and asked if they can run the press conference in Ukrainian since I do not understand Russian. One of the commanders says, “ah, diaspora.” The three panelists then proceed to talk about the war in the east. Mr. Bereza speaks in Ukrainian, Messrs. Semenchenko and Teteryk in Russian. The questions from the media are in Ukrainian.

After the press conference I met with Mr. Teteryk to ask some more questions. He spoke in a mixture of Ukrainian and Russian (I had to keep reminding him that I don’t understand Russian), he told me there are 43 battalions fighting in the east, with 200 to 600 members in each. He also informed me that three times a week a convoy of cars comes to the Ukrainian Home in Kyiv to pick up supplies. Then the convoy delivers the supplies to the central committee in Donbas, and from there they are distributed to the various battalions. He said people drop off food and clothing. I ask him what is desperately needed other than Kalashnikovs, and he replied: “Thermal underwear because now we wear three sweaters and its difficult to maneuver.” When I commented that, if these items are sent by boat, it will be a while before they get here, he looked me straight in the eye and said: “We will be fighting a long time.”

You too can help. Show solidarity with Ukraine’s volunteer battalions!

Prepare a small package containing thermal underwear, gloves and socks and send it to Volunteer Battalions, Ukrainian Home, 2 Khreschatyk St., Kyiv 01001, Ukraine. Or send a check (contributions are tax-deductible) to: Ukrainian Human Rights Committee, 203 Bainbridge St., Philadelphia PA 19147; we will purchase and send the items to the battalions.

The letter-writer heads the Ukrainian Human Rights Committee of Philadelphia. She may be contacted at ubulana@aol.com.

View all Letters to the Editor Stories →