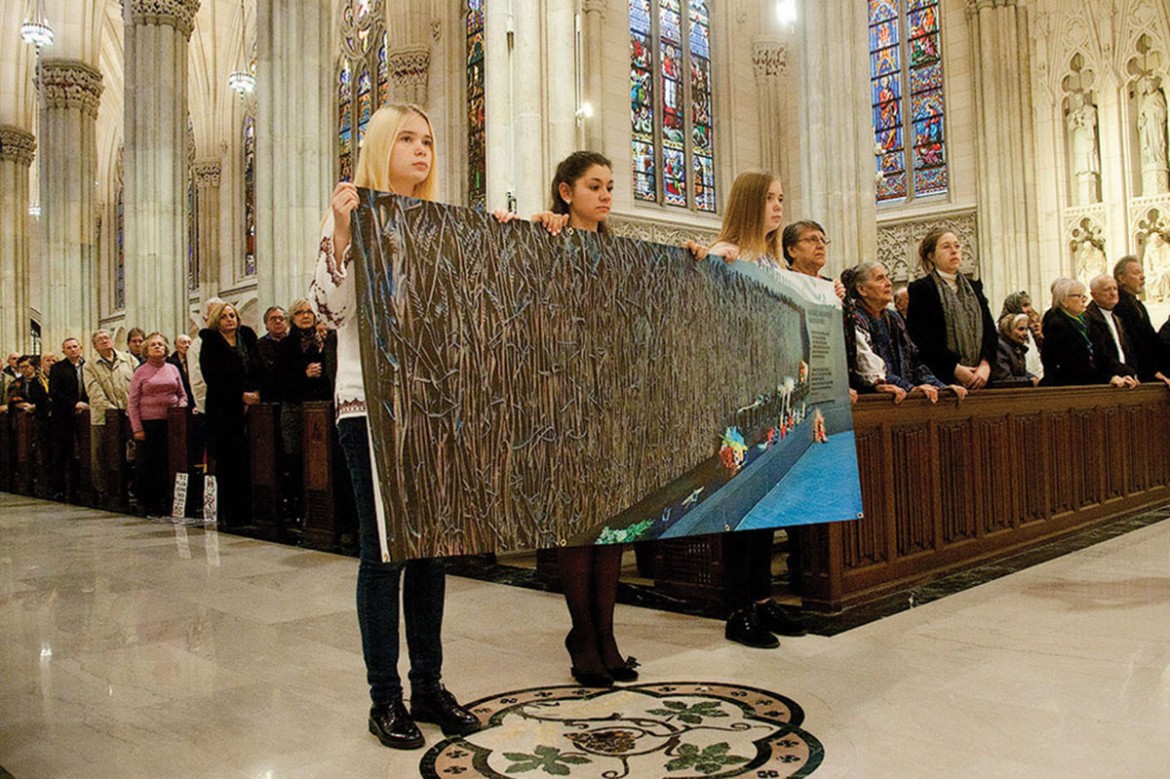 NEW YORK – Hundreds of Ukrainians, friends and supporters gathered on Saturday, November 21, at Manhattan’s iconic St. Patrick Cathedral for an ecumenical requiem service and commemorative program dedicated to the memory of Ukraine’s Holodomor, Stalin’s genocide of millions of Ukrainians in 1932-1933.

As co-organized by the Ukrainian Congress Committee of America (UCCA), the largest representation of Ukrainians in America, this annual commemoration regularly attracts hundreds of attendees from across the tri-state metropolitan area, and this year was no exception. Even following the massive gathering in Washington, on November 7, when the national Genocide Memorial was dedicated in the presence of over 5,000 people, this year’s annual program at St. Patrick’s drew buses from communities in Hartford, Conn., and Whippany, N.J., as well as hundreds of other solemn faithful.

As has become tradition, the requiem service was led by hierarchs of the Ukrainian Orthodox Church of the U.S.A. (UOC-U.S.A.) and the Ukrainian Catholic Church, with the participation of the Dumka Chorus of New York, under the direction of Vasyl Hrechynsky.

Prior to the service, a solemn procession of students was organized by Ivanka Zajac, president of the United Ukrainian American Organizations of New York. With the Dumka choir singing, students from St. George Academy began a procession through the massive nave of the cathedral, carrying an image of the newly dedicated Holodomor Memorial in Washington. Following the high school students were the pupils of the “Samopomich” School of Ukrainian Studies in New York City, under the direction of Ivan Makar, who were dressed in Ukrainian embroidery and carried candles and stalks of wheat. The procession was anchored by Nadia Severyn, a Holodomor survivor and yearly participant of the cathedral services. 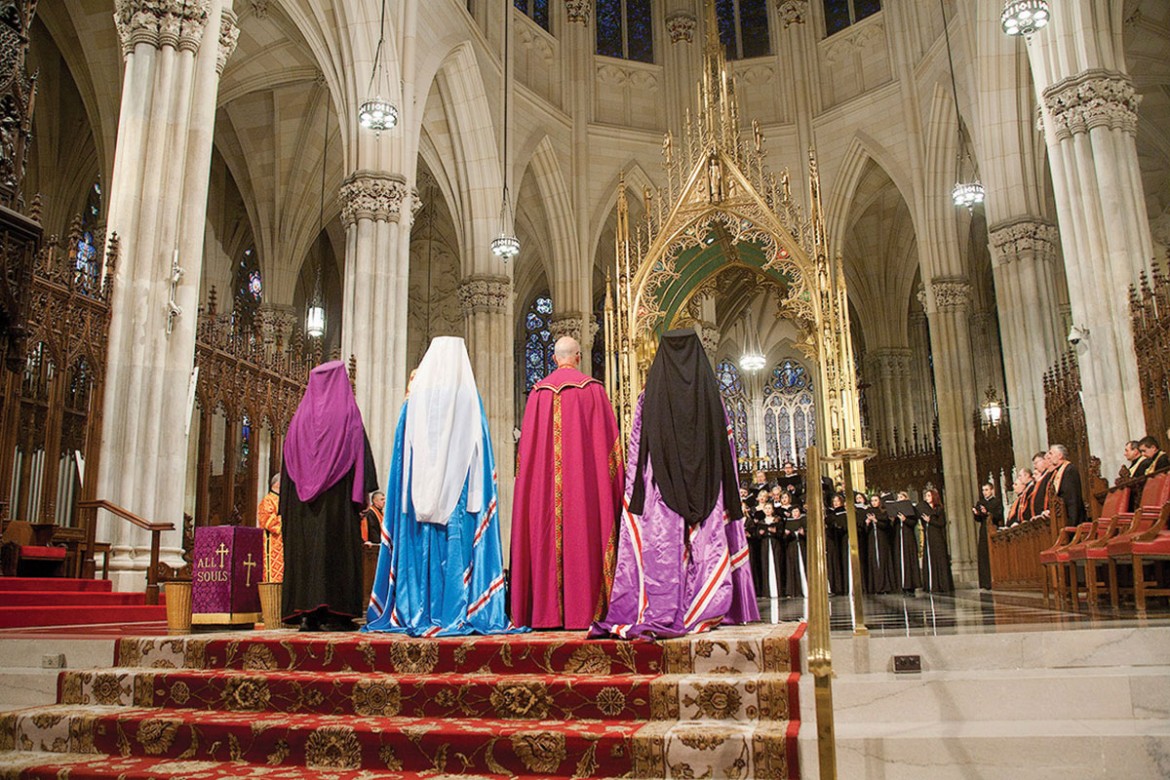 Metropolitan Antony of the UOC-U.S.A. was the first to address the attendees, explaining in brief the context of the ceremony to the cathedral’s many visitors. He was then joined by Bishop Daniel of the UOC-U.S.A. in leading the traditional Ukrainian memorial service – the panakhyda – along with Bishop Paul Chomnycky and Bishop Emeritus Basil Losten of the Ukrainian Catholic Eparchy of Stamford, Conn.

Following the requiem service, the assembled were addressed by Tamara Olexy, president of the UCCA, who cautioned that, “The Holodomor cannot remain merely a Ukrainian issue – it must be a global one so that such tragedies do not reoccur.”

Along that theme, Ms. Olexy and all subsequent speakers remarked on the importance of the national memorial in Washington – a symbol of the immortality and courage of the Ukrainian nation which now stands just blocks from the U.S. Capitol building.

It was only fitting that the keynote speaker of the program inside St. Patrick’s was the design architect of the Holodomor Memorial, Larysa Kurylas, whose remarks touched on her personal journey of genocide awareness in Ukraine’s history. “Without a doubt, the creation of this monument will be the most important project of my architectural career,” she underscored.

William Pope, senior advisor for Europe to the U.S. Mission to the United Nations, delivered a statement from the White House, which read in part, “Through the tireless efforts of the Ukrainian American community… a memorial now stands in the heart of our nation’s capital, allowing Americans to share in the somber memory of the Holodomor.”

Valeriy Chaly, ambassador of Ukraine to the U.S., made mention of Ukraine’s Day of Dignity and Freedom, now celebrated every November 21 in memory of the Orange Revolution and the Revolution of Dignity.

Ambassador Yuriy Sergeyev, permanent representative of Ukraine to the United Nations, addressed the assembled in both Ukrainian and English, remarking on the long efforts of the Ukrainian Mission to educate others about the Holodomor and the importance of remembering its legacy.

Bishop Chomnycky concluded the program with solemn prayers and a word of sincere gratitude to Archbishop Timothy Dolan for graciously allowing the Ukrainian community to once again commemorate the Holodomor at St. Patrick’s Cathedral.

The Dumka Chorus then led the faithful in an uplifting rendition of the liturgical hymn “Prayer for Ukraine.”