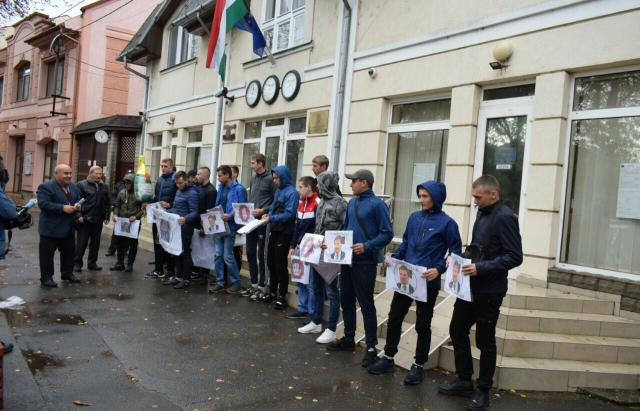 Members of the local chapter of nationalist Svoboda group protest in front of the Hungarian consulate in Berehove in Zakarpattia Oblast on September 24 after video footage was released five days earlier of Ukrainians swearing allegiance to Hungary inside the Consulate during a citizenship ceremony.

KYIV – A diplomatic confrontation is brewing with Hungary after hidden-video footage emerged that shows a group of Ukrainians taking an oath of loyalty during a citizenship swearing-in ceremony inside the Hungarian Consulate in the Zakarpattia Oblast border town of Berehove.

After the induction, a Hungarian diplomat told the group to hide their new citizenship status from the Ukrainian authorities while toasting them with champagne, according to the video posted on YouTube on September 19.

Ukrainian Foreign Affairs Minister Pavlo Klimkin said he will expel the Berehove consul if the Hungarian foreign affairs minister doesn’t recall him in the coming days. Mr. Klimkin’s comment came after a meeting with his Hungarian counterpart on September 26 during the 73rd session of the United Nations General Assembly in New York.

“We spoke for an hour and didn’t reach an understanding of how to interpret this incident [issuance of Hungarian passports],” Mr. Klimkin told reporters based on a Facebook video that the Ukrainian Foreign Affairs Ministry posted. “I proposed that [Hungarian Foreign Affairs and Trade Minister Peter] Szijjarto recall the consul, but as I understand, he doesn’t agree. If a corresponding decision isn’t made in the coming days, he will go home – this is certain.”

Adding that the Hungarian didn’t accept any of Ukraine’s arguments, Mr. Klimkin said that Hungary’s latest statements regarding the incident are “similar to ones Russia makes, but I don’t want to speculate how they came about, perhaps after meetings with the Russian leadership.”

In New York, Minister Szijjarto told journalists that Hungary won’t recall its consul. He also denied that the Hungarian Consulate violated international norms or Ukrainian laws by issuing Hungarian passports to Ukrainian citizens, according to a report in the Ukrainian-language Radio Svoboda.

“It is false and a lie to affirm this by the Ukrainian side,” the Hungarian foreign affairs minister said.

Moreover, Mr. Szijjarto said his country would reciprocate should any of its diplomats be expelled from Ukraine.

Speaking to journalists on September 24 before boarding a plane for New York, he said he would meet with his Ukrainian counterpart “in view of the fact that the drumming up of anti-Hungarian sentiment has gained further impetus in Ukraine recently.”

Before departing for the U.N. assembly, Mr. Klimkin said during a 1+1 channel morning show that the granting of citizenship to Ukrainians inside the country by foreign diplomatic entities “violates the Vienna Convention on Consular Relations.” 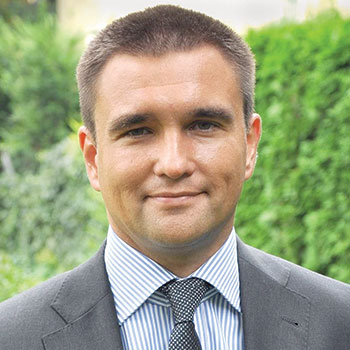 Ukraine’s Minister of Foreign Affairs Pavlo Klimkin said the granting of citizenship to Ukrainians inside the country by foreign diplomatic entities is a violation of the Vienna Convention on Consular Relations.

“We knew they [Hungarians] were doing this… but now we have proof and we need to act on this evidence,” Mr. Klimkin said in a Twitter video blog.

A criminal case on the incident has been opened and the Security Service of Ukraine is investigating it, Prosecutor General Yuriy Lutsenko told journalists after a meeting of the parliamentary National Security and Defense Committee on September 27.

Dual citizenship is illegal in Ukraine. There is no criminal or administrative punishment for the offense. Certain elected officials, public servants and military personnel are subject to administrative penalty if they hold more than one passport.

Mr. Szijjarto called the video footage of the citizenship ceremony “a secret service operation” on the part of Ukraine.

More than 100,000 Ukrainians of Hungarian descent reside in the westernmost Zakarpattia region. Most live in towns and cities that border Hungary, including Berehove, where the passport ceremony took place.

In addition to Berehove, Hungary has Consulates in Zakarpattia’s regional capital of Uzhhorod, the Carpathian city of Ivano-Frankivsk and Lviv, as well as in Kyiv, where its embassy is also located.

Most signage in Berehove is bilingual (Ukrainian and Hungarian), and clocks often show Hungarian time – one hour behind Ukrainian time. Some 70 percent of primary school graduates in the city didn’t pass their final Ukrainian language exams in the previous school year.

Hungary’s relations with the European Union, of which it is a member, and Ukraine, have gradually soured since 2010, when an anti-immigrant, nationalist government led by Prime Minister Viktor Orban took power in Budapest. He was re-elected in April.

“Since returning as prime minister in 2010, Orbán and his Fidesz party have chipped away at Hungary’s democratic checks and balances, curbed judicial independence and clamped down on the independent media,” the British newspaper The Guardian reported on April 9. “Hungary’s democratic backsliding has been accompanied by a drumbeat of xenophobic rhetoric, directed against refugees, Brussels and George Soros.”

Kyiv-Budapest relations worsened in particular when Ukraine passed a new law on education in September 2017.

The new measures mandate obligatory Ukrainian-language instruction starting in the fifth grade. “Those attending schools where instruction is in their native language will be able to continue learning it in separate classes,” The Ukrainian Weekly reported on October 6.

Before, the opposite was the case as regards minority languages, including Hungarian or Russian, while study of Ukrainian was relegated to separate courses for up to four times a week, Yegor Stadnyi, an analyst for the Kyiv-based non-profit education, migration and urban development center CEDOS, told The Ukrainian Weekly.

However, the Venice Commission – a constitutional advisory body of the Council of Europe – upon review of the education law, stated that it disagrees with “Hungary’s demand to keep in Ukraine the possibility of teaching exclusively in Hungarian,” according to the body’s secretary Tomas Markert.

The advisory body believes that the students of the region should also study the Ukrainian language.

“We do not share this [Hungary’s] position,” he said, as cited by Interfax Ukraine news agency on January 25. “We believe that the state can switch from a purely Hungarian-speaking system to a mixed one, where part of [school] hours will be taught in Hungarian and part in Ukrainian. Moreover, it is even better for the students themselves if they receive education in two languages.”

There were 71 educational institutions that offer Hungarian-language instruction in the 2016-2017 school year, according to the Ministry of Education and Science.

And Mr. Orban’s government this summer created a ministry that is responsible for developing the Transcarpathian region and a kindergarten program in the Carpathian basin that may encompass parts of Ukrainian territory.

The move prompted Foreign Affairs Minister Klimkin’s office to summon the Hungarian ambassador for an official explanation, including one in writing.

Hungary also provides economic assistance to small business owners to about a fifth of the ethnic Hungarian population in Zakarpattia, Mr. Klimkin said.

He stressed that a new law on Ukrainian citizenship must be passed. He also noted that Kyiv “doesn’t have a clear strategy of how to support Ukrainians with Hungarian heritage.” While visiting Zakarpattia, Mr. Klimkin observed that business owners didn’t know enough Ukrainian “to complete a tax declaration form.”

He called for devising a policy to cooperate more with Ukrainian Hungarians. “The other option is a road to nowhere. I want to ensure that more of Ukraine is found there [in Zakarpattia] with each year,” Mr. Klimkin said.