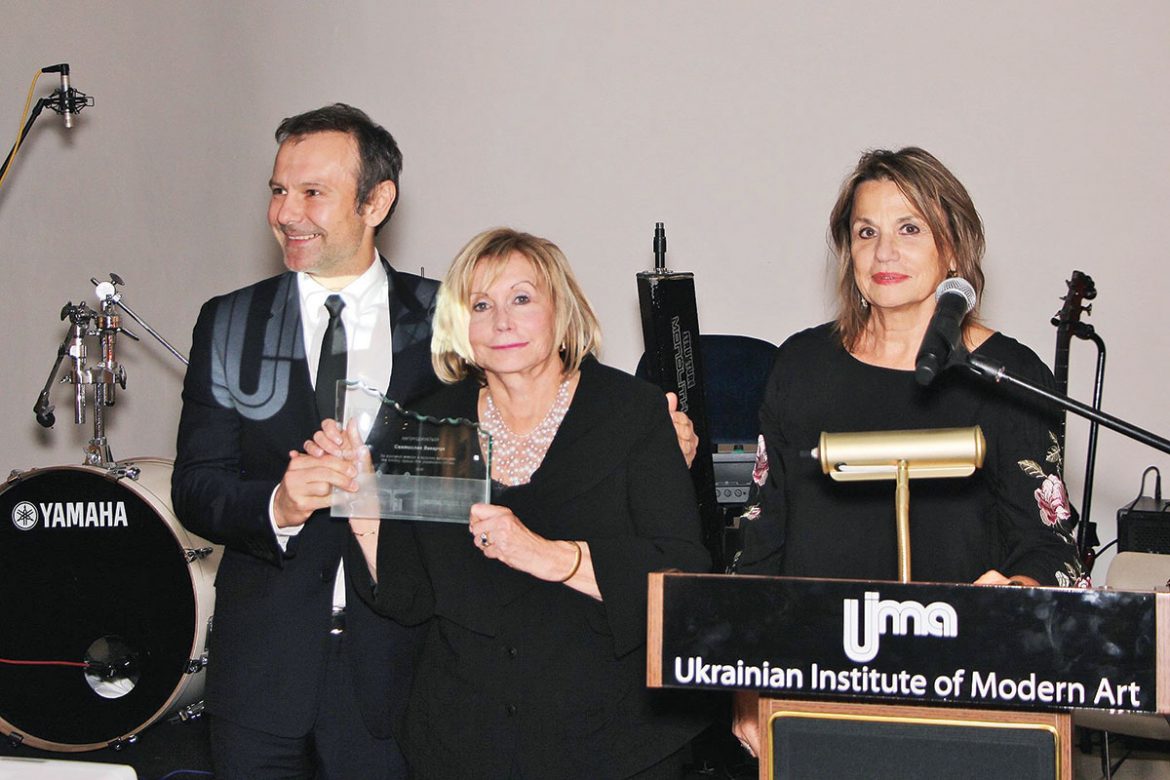 CHICAGO – Svyatoslav Vakarchuk and Alexandra Diachenko Kochman were honored on October 6 for their contributions to culture and the arts at the annual dinner of the Ukrainian Institute of Modern Art (UIMA) in Chicago. The evening brimmed with excitement as the guests welcomed Ukraine’s famous singer and political activist Mr. Vakarchuk.

The evening included an innovative program, with musical entertainment provided by the Chicago rhythm and blues award-winning musicians Lynne Jordan and the Shivers. Although Mr. Vakarchuk was not scheduled to perform, once he heard the musicians play, he was inspired to join them on the intimate stage with an unforgettable rendition of the Ella Fitzgerald classic “’Round Midnight.” The audience and the musicians were surprised and delighted with the authentic blues rendition of this song performed by the Ukrainian artist.

Mr. Vakarchuk was the focus of much attention due to his status as Ukraine’s leading singer of rock and pop music, for his role as public activist, and also because of his notoriety as a possible presidential candidate. The question of whether he will run in Ukraine’s next election was on everybody’s mind. As on previous occasions, Mr. Vakarchuk did not answer that question, instead, he concentrated on the topic of culture – not so much about culture as a visible manifestation of a nation, but about the nation’s values and how those values are developed and preserved as a legacy.

To the applause and standing ovation of an enthusiastic audience that filled the hall of the UIMA to capacity, Mr. Vakarchuk received the Man of the Year Award in recognition of his promotion of Ukraine’s culture and his contribution to the positive image of Ukraine throughout the world.

The evening’s program also included a video presentation about the life and work of Ms. Diachenko-Kochman, who was a member of the first group of founders of the Ukrainian Institute of Modern Art 50 years ago. Ms. Diachenko-Kochman is a well-known artist who specializes in raku ceramic and clay sculptures, utilizing an ancient technique in contemporary styles. One of her many unique large pieces was acquired by the former governor of Illinois, and was displayed on the wall of the state building in Chicago for many years. Ms. Diachenko-Kochman received an award from the Institute for her work as an artist and art educator. 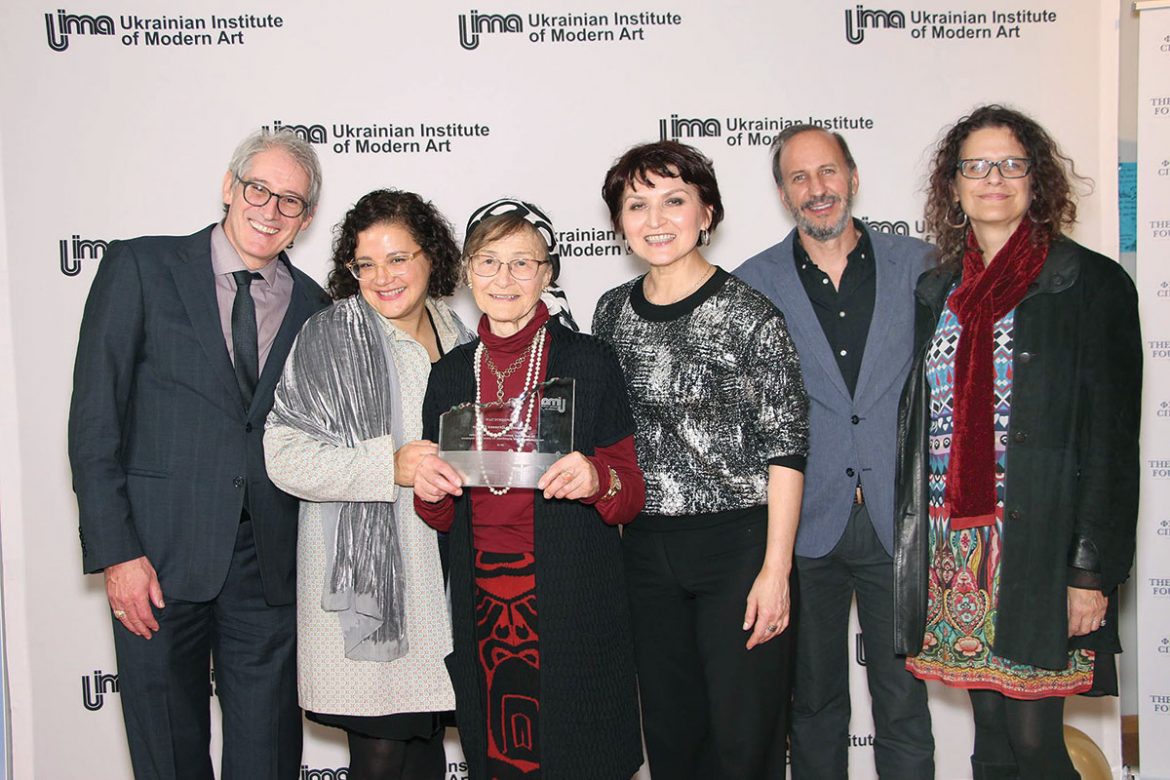 Alexandra Diachenko Kochman with members of her family.

Mila Luhova interviewed Mr. Vakarchuk about his plans in politics and his view of Ukraine’s cultural image in the world. Mr. Vakarchuk has been limiting his interviews with the press, although questions have been increasing. Ukrainians catch every word of his statements in order to unravel the eternal “To be or not to be?” – a question that affects their future, expressed directly as, “Will he or won’t he run for president.” With his infectious smile, Mr. Vakarchuk answered, “Maybe sometime in the future.”

Below is an edited translation of Ms. Luhova’s conversation with Mr. Vakarchuk.

Fundamental principles necessary for the development and prosperity of Ukrainian culture.

We must preserve our identity and be open to new possibilities. I am not a politician yet, and maybe I will never be, but I will always be an honest man, the words you hear from me are sincere.

Usually, when we talk about culture, we mean its material manifestations: paintings, architecture, photographs, music. However, culture is, first of all – values, values that are intangible, something we cannot touch but something we feel. The most important aspect of a nation’s culture is the people’s values. Those countries that are thriving today are firmly associated with the great cultural heritage that they have managed to create and preserve precisely because of their values. In my opinion, in order for a culture to play a significant role in a country’s development, a combination of three fundamental components should be at work.

Taking as an example the Jewish people, we see that they, who were persecuted, they, who did not have their own land, created the greatest book of values that we live by to this day – the Bible. Today, the Jewish people have their own state and are proud of their writers, scholars and artists renowned throughout the world. And they are proud of the values that shaped their cultural heritage.

Second is the ability to develop and innovate.

Let’s take for example the United States of America. The music known as the blues was born from the spiritual gospel music of African slaves who were brought to America. In their songs, they buried their grief, lament and hope. Subsequently, this music expanded and transformed further, even becoming fashionable. In the 20th century, the culture of rhythm and blues became known throughout the world. And it all began from the people who were subjected to harsh discrimination.

Immigrants from Eastern Europe also contributed to the development of this music – they brought the sounds of the dombra, a unique kind of guitar, into these melodies. I’m not sure if it was Ukrainians who brought it, but I’m convinced that they had a relationship to this process.

Third is the ability and desire to allow other cultures to enrich your own.

It is necessary to take the best of what is in other cultures and to make it part of our own. This is how one’s culture grows stronger. Developed and prosperous nations have examples of how they benefit from this approach. Charles Aznavour, a well-known French singer, was one of my favorite performers and he was 100 percent Armenian. He had no drop of French blood, but was considered one of the most prominent French singers. If you listen to his songs you will feel the touch of another culture.

I would like Ukrainian culture to use these three components – they are necessary for our cultural progress. We all know (especially here, in Chicago, thousands of miles from your own home), how difficult it is to preserve your identity, to keep who you really are. Right now, I am meeting with you, people whose circumstances forced them to leave their homes but who still have the desire and energy to preserve their Ukrainian identity. And you are also capable of developing and being open to new influences that enrich your own lives.

“I am very proud of our people and our culture! All this adds to my optimism about our future.”

Translation from Ukrainian and editing by Marta Farion.

Mila Luhova is chief editor of Pokolinnia Yi. She studied at Ternopil National Economic University and currently lives in Chicago.