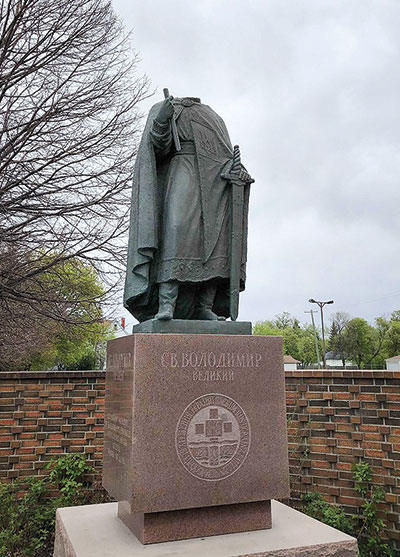 The vandalized statue of St. Volodymyr in Winnipeg, near the Ukrainian Catholic Metropolitan Cathedral of Ss. Vladimir and Olga.

OTTAWA – Although their motive and role remain unclear, a few teenagers spotted in the middle of the night leaving the crime scene as the likely suspects could not have chosen a more precious Ukrainian Catholic monument to vandalize last month.

On the morning of May 21, the bronze statue of St. Volodymyr the Great located adjacent to the Ukrainian Catholic Metropolitan Cathedral of Ss. Vladimir and Olga in Winnipeg’s North End was found headless and missing the cross held in the figure’s hand.

Created by the world-renowned Ukrainian Canadian sculptor Leo Mol, the statue was blessed by Pope John Paul II during his historic visit to Winnipeg in 1984 and “symbolizes the beginning of Christianity” in Ukraine, said Ukrainian-born Anna Katchanovski, the cathedral’s secretary.

“Someone said that if it wasn’t for [St. Volodymyr], we might still be pagan today. So it is a big deal, which is why we didn’t just get people from the cathedral responding, but the whole Ukrainian Canadian community too,” she commented.

In a statement, the Ukrainian Canadian Congress (UCC) said it was “appalled by the disgraceful desecration of the monument,” noting that St. Volodymyr brought Christianity to Ukraine in 988.

“We hope that this is not yet another example of hate-motivated incidents in Canada,” said UCC President Alexandra Chyczij.

In recent years, Canadian synagogues and mosques have been defaced with hate-filled graffiti, if not come under lethal attack, as horribly illustrated in the 2017 shooting at the Islamic Cultural Center in Quebec City that left six men dead and more injured. In response, the Canadian government has spent more than $7 million (about $5.1 million U.S.) over the past seven years to upgrade security at religious institutions.

However, Winnipeg police appear to be investigating the decapitation of the St. Volodymyr statue as vandalism and theft.

The search for the perpetrators is ongoing after the statue’s head was recovered near the cathedral and returned in a black knapsack on May 25. 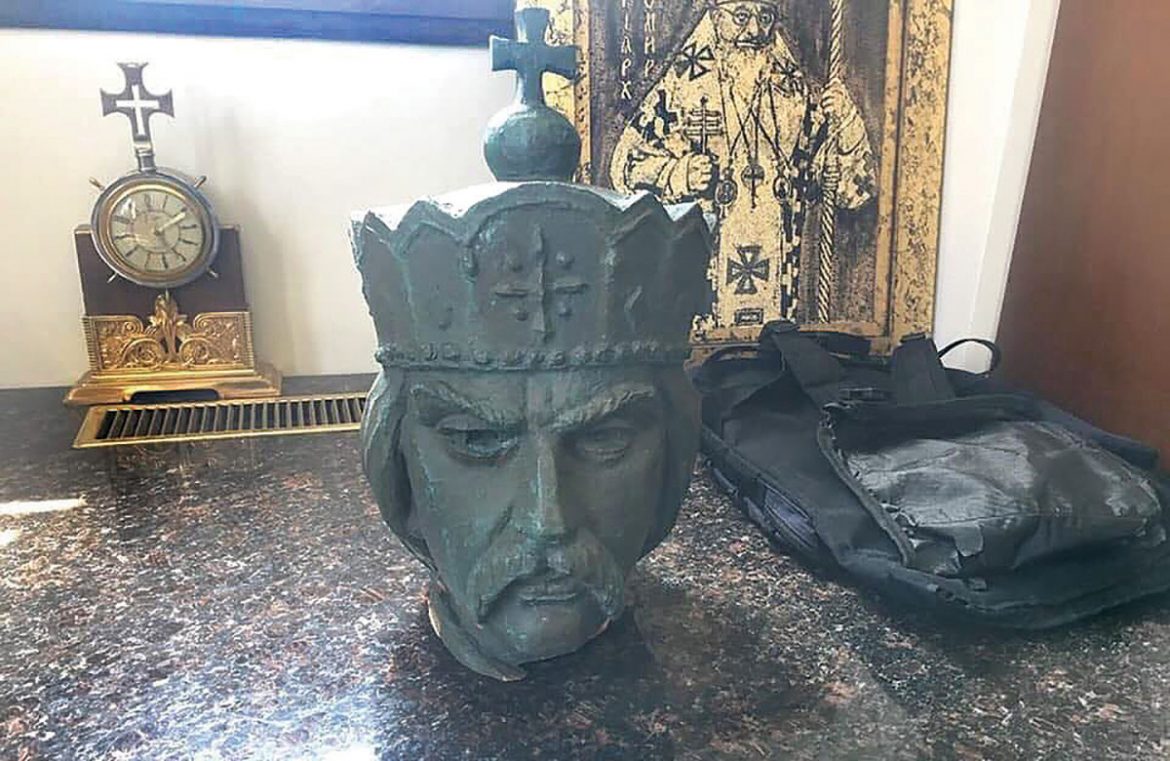 The severed head of the St. Volodymyr statue was found on May 25 and returned to Ss. Vladimir and Olga Cathedral. A post on the cathedral’s Facebook page reads: “Thank you to all for your prayers regarding the vandalism of our statue of Blessed St. Volodymyr. We were very thankful to have someone find and return the statue head to the cathedral today. A group is going back to the area where it was found to look for the cross. Hopefully we are able to get both pieces back for the restoration.”

“Two men working on construction in the area found it” at a low-rental apartment complex, according to Ms. Katchanovski.

Nicholas Chubenko, a retired geriatric clinician and former social worker who chairs the cathedral’s parish council, said in an e-mail that he is waiting to hear from the lead police investigator on any developments in the case and has contacted Bear Clan Patrol Inc., a volunteer-based Aboriginal organization that promotes safety, conflict resolution and crime prevention in Winnipeg’s inner-city. The city is home both to many Indigenous people as well as a Ukrainian community.

“I’m hoping this group of volunteers may have some success in finding leads into the missing [cross] from the statue,” said Mr. Chubenko, who mentioned that the cathedral has experienced past vandalism, including a recent break-in of the church garage that resulted in theft of several items.

“We’ve talked about putting in a security camera and would like to have more of a police presence in the area,” he said, adding that the cathedral might relocate the monument to a more secure area.

Ms. Katchanovski said she believes the culprits might have been caught in the act had someone called 911.

She explained that residents of St Josaphat Selo-Villa, a seniors’ residence that caters to a Ukrainian Catholic clientele and is located across the street from the cathedral, witnessed suspicious activity over two nights.

“People heard a saw going through metal at about three in the morning,” said Ms. Katchanovski. “When they looked out their windows, they saw what looked like 18-, 19-year-olds who got on their bicycles and left.”

She explained that the next night, the teens allegedly returned and Selo-Villa residents “heard a loud banging noise” between 4 a.m. and 4:30 a.m. By then, the statue’s head was removed, and the suspects were seen headed down the street on their bikes.

“Nobody called the police – I was totally shocked,” said Ms. Katchanovski, who made that call on the morning of May 21 when she also notified Winnipeg Metropolitan Archbishop Lawrence Huculak about the desecration at his cathedral.

“Despite the seriousness of this in the eyes of our people, our message is that we are not going to ask any questions of the perpetrator,” said Mr. Chubenko. “We just want the missing part of the statue returned.”

One person who is particularly keen to have the St. Volodymyr statue whole again is Scottish-born David Loch, who owns and runs art galleries in Winnipeg, Toronto and Calgary that specialize in Canadian and European paintings and sculptures, and was Mr. Mol’s exclusive dealer and close friend.

Mr. Loch said that he would pay for the costs of repair if the cathedral’s insurance won’t provide coverage. (Mr. Chubenko told The Ukrainian Weekly that the parish committee is also planning a fund-raising campaign to complete the restoration work.)

Although Mr. Loch had not seen the statue before it was vandalized, his connection to the man who designed and created it stretched over decades and is deeply personal.

Mr. Loch, now 71 years old, sold his first Mol piece – a pair of bear cubs wrestling – for $300 (Canadian) in 1969, three years before he opened his first gallery in Winnipeg. That led to a close partnership between both men.

“What transpired is that Leo no longer had to look for any commission work because I supplied all the money he needed to do the bigger works,” Mr. Loch said in an interview. “It was a wonderful match between the two of us.”

It also led to Mr. Loch becoming one of Canada’s finest art dealers and Mr. Mol’s star in the constellation of great artists burning even brighter.

The artist was born Leonid Molodozhanyn on January 15, 1915, in the village of Polonne in what is now Ukraine and what was a community of potters.

A quiet and shy man, Mr. Mol made a loud and bold impression in the arts world with his exquisitely detailed works on display around the world.

Like the iconic Canadian photographer Yousuf Karsh, who chronicled the great leaders of the 20th century – from Winston Churchill to Dwight Eisenhower – in celebrated portraits, Mr. Mol did the same in noteworthy sculpture with those two men – and others, particularly from within the Catholic Church.

The Taras Shevchenko Memorial, located in Washington and dedicated in 1964 on the 150th anniversary of the great Ukrainian poet’s birth, is a Mol creation. Another Mol statue of Shevchenko is located in Buenos Aires.

“There are very few Canadian artists who made major contributions outside Canada – and Leo Mol is one of them,” said Mr. Loch. “He was a giant of an artist.”

Mr. Mol’s artistic touch is also present within Ss. Vladimir and Olga Cathedral, which also includes stained-glass windows and a bronze statue of Nykyta Budka, the first bishop of the Ukrainian Catholic Church in Canada, created by Mr. Mol.

But the outdoor statue of St. Volodymyr indirectly had personal significance for the artist, who died in Winnipeg on July 4, 2009, at the age of 94.

Four years after the bronze sculpture was unveiled in Winnipeg, two more statues of St. Volodymyr created by Mr. Mol were erected in London and Rome to mark the millennium of Christianity in Ukraine. (There is also one at the St. Vladimir Institute in Toronto.)

In 1990, Mr. Mol’s younger sister, who was living in Ukraine at the time and had not seen her brother for most of her life after he left their village at the age of 15 to study painting in Vienna, located him in Winnipeg after reading a newspaper story about his St. Volodymyr statue in England and contacted him by mail.

“I’ll never forget the day that Leo came into the gallery, in tears, holding this letter from his sister,” recalled Mr. Loch, who said that he arranged for her to travel from Ukraine to Winnipeg to see her brother and the Leo Mol Sculpture Garden that honors in him in the city’s largest park, which opened in 1992 and remains North America’s only such garden devoted to an individual artist.

During the reunion with his sister, Mr. Mol was told that his father and brother died in Joseph Stalin’s camps, and that his mother died in exile, according to a 2009 Winnipeg Free Press story on his passing.

As for the St. Volodymyr statue in Winnipeg, Mr. Loch – a self-described “sculpture nut” – said it would require “a lot of work” to fully restore the statue that was defaced, in his opinion, with a portable grinder.

“It’s important that it gets done by the right people so that whatever goes back up there is going to be the very best that we can make it with what’s happened to it,” said Mr. Loch, who assessed the damage to the statue with Peter Sawatsky, a Manitoba sculptor of Ukrainian descent who worked with Mr. Mol.

When asked how the artist would have reacted to the vicious assault on the celebrated statue he created, Mr. Loch believes that Mr. Mol would have taken it in stride.

“Leo was a very kind soul and such a lovely man,” said Mr. Loch, who recalled the time Mr. Mol’s studio was broken into and one of his bronze busts and two of his paintings were taken. The items were recovered.

“Leo would have been disappointed about something that was done so deliberately over two nights to the statue,” said Mr. Loch. “But he would have shrugged his shoulders and said, ‘Don’t worry, I’ll fix it.’”