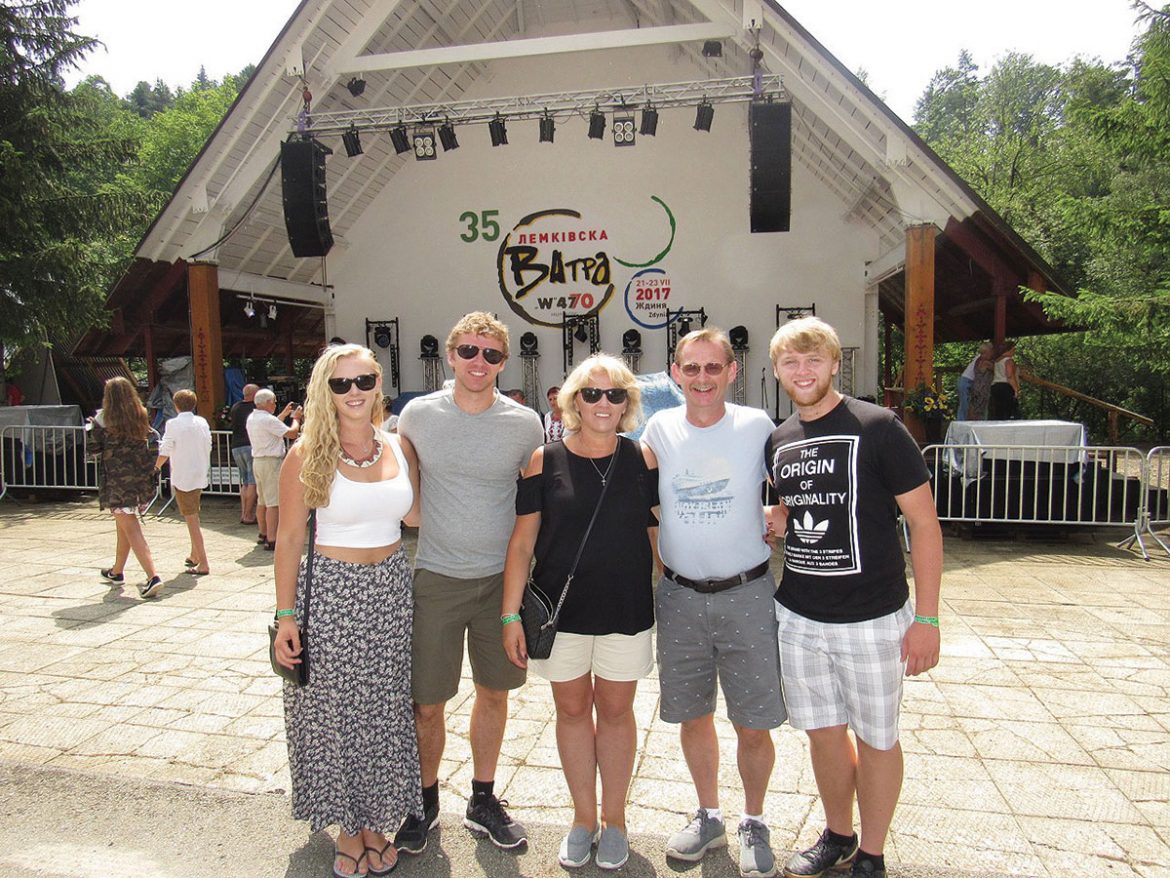 The Lemko Vatra in Zdynia, Poland, is considered the largest and most recognizable Lemko cultural festival worldwide. Held since 1990, this three-day festival in the Lemko region has celebrated Lemko cultural traditions with hundreds of musical and theatrical performances on stage, as well as exhibitions, contests and traditional crafts. The Lemko Vatra in Zdynia has attracted thousands of guests and tourists from around the world, including not just the Lemko region and Poland, but Ukraine, Slovakia, Croatia, Serbia, Hungary, Austria, Canada and the U.S.A. Siblings Natalia and Marko Lyszyk, both young professionals who graduated from Rutgers University and live in Bridgewater, N.J., attended the Lemko Vatra in Zdynia last summer and shared their experiences with Mark Howansky, president of the Organization for the Defense of Lemkivshchyna (OOL), which submitted this Q&A.

What is your connection to Lemkivshchyna (the Lemko region)?

How did you hear about the Lemko Vatra and why did you go?

Natalia: Our family has always known about the Lemko Vatra in Zdynia and knew it was somewhere we needed to visit. So, this past summer we decided to make that happen. We wanted to see where our grandparents were from and to experience everything that our mountains had to offer.

Marko: Also, our aunt from Poland went there a few times and told us about it. I decided to go because I wanted to visit my homeland and go to an event that celebrates the Lemko culture.

How did you travel there and where did you stay?

Natalia: When we first arrived in Poland, we spent a few days up north in Kolobrzeg, seeing family. Then we rented a car and made our 12-hour journey down south. Once we arrived in Lemkivshchyna, we stayed in Komańcza, a village about 15 minutes from the Lemko Vatra.

What else did you visit during the trip?

Natalia: After enjoying our weekend at the Lemko Vatra, we started making our way to the different villages and seeing where my grandparents are from. Our first stop was Lipowiec, where my dad’s mother is from. Unfortunately, not much is there. All the homes were burned down as my grandmother’s family was forced to leave. There was a small information board with a map and history of the village. As we stood around and observed the empty land, a man stopped to talk to us. He bought the land where my family’s houses once stood and has become very interested with its history – so interested that he wrote a book (and we bought three copies). After Lipowiec, we went to my other grandmother’s village of Turzansk. Homes are still standing and people still live there. Almost every other house was a relative of my mom’s. As we made our rounds to visit family, we jokingly started calling my mom a celebrity as family was so happy to see my mom again and meet us. None of the family we visited knew we were coming, but they were so hospitable and inviting. After spending a few days there, our last village was Zahoczewie, where homes are still standing and occupied. We were even able to see the house where my mom’s father was born, thanks to a few older neighbors whom we talked to while we were there. Along with the different village visits, we stopped by two Lemko museums.

Marko: After the Vatra, we visited the Museum of Lemko Culture in Zyndranowa.

What did you enjoy most?

Natalia: I honestly enjoyed every aspect of the Lemko Vatra. It was an experience I will never forget. I feel like sometimes I can’t relate to all Ukrainian people fully since my parents were born in Poland. However, I can’t relate to all Polish culture because I am not Polish. At the Lemko Vatra, I felt that I could relate completely – the food, the songs, the dancing, the way people spoke. I just felt comfortable, as if I have been coming every year – that is what I enjoyed most about the Lemko Vatra.

Marko: Overall, I enjoyed being in a place where I felt truly at home and proud to be a Lemko. One of the specific things I really enjoyed was the massive amount of Lemkos singing traditional Lemko songs together and accordion players in the middle.

What did you enjoy least? What surprised you the most?

Natalia: The only thing I did not enjoy that much was the hot and humid weather. What surprised me most is how comfortable we felt and how friendly everyone was. And, because of the friendliness, conversations arose between us and other Lemkos – some of whom we had friends or family in common with. We, also, unexpectedly, met several friends we have not seen in a while.

Marko: One thing that I was surprised about was that there was a posterboard with a list of people who were detained at the Jaworzno and Talerhof concentration camps. On the list of people sent to Jaworzno was my great-grandfather, who was at the time, the “sołtys” (village leader) of Turzansk.

Did you meet others your age? How did you communicate? What were your impressions of them and theirs of you?

Natalia: We met up with our cousin who is from Kolobrzeg, but lives in Wrocław. He was camping with his friends. We hung out with them for a bit and communicated in Polish or Ukrainian or English. Our impressions of them, and theirs of ours, was that of interest. We were interested to learn about them and where they come from and vice versa.

Marko: I met Hryc Suchanycz, who was the MC and helped run the Vatra, and I met people from Radio Lemko. We spoke in Lemko to each other. We both had a positive impression of each other because I feel we are all proud Lemkos and we appreciate that, even though we are not living in our ancestral homeland, we want to preserve our Lemko culture.

Marko: What I found interesting is that, when I talked to some people, we found out that we had mutual friends and I met up with people who used to live in America. The Vatra is a nice way of bringing people together, whether you know them or they’re new friends.

Natalia: As soon as you entered the Vatra, there was a huge map of Lemkiv-shchyna and its villages. You could take a push-pin and place it in the village that you or your family is from. My brother placed pins where our family is from. And then my fiancé, Kile, who is English and was on the trip too, pushed a pin into a village named Izby. Because my fiancé is now an “honorary Lemko,” appointed by my brother Marko, he decided that he will say his family is from Izby. (Kile’s last name is Dee, so Marko told him that he must be related to the famous actress Sandra Dee, who has roots in Izby.) As Kile goes to push the pin in – which was the only pin placed in Izby – a man comes running up to him, all excited, and starts explaining how his family is from Izby and he never met anyone from there before. Kile, whose Ukrainian and Polish are limited, stood there smiling, as his eyes were looking for my brother’s or my help. Marko stepped in to help explain to Kile why this man was so excited. And, not to disappoint the man from Izby, Marko said that Kile’s great-grandmother was from Izby.

Would you go back and recommend it to others?

Natalia: I would go back as soon as possible! Everything from the food, the atmosphere, the vendors, the history, the singing and dancing was amazing.

Marko: I would definitely go back. I need to go back within the next two years. I would recommend it to others, especially Lemkos. It’s important for the preservation of our culture.

How has this trip affected your Lemko identity and opinion of Lemkos?

Natalia: This trip has strengthened my Lemko identity and solidified my opinion of how strong, united and deep in culture Lemko people are.

Marko: It made me proud to be Lemko. It gives me inspiration that Lemkos are reviving the culture in Poland and it makes me want to do the same here in America.