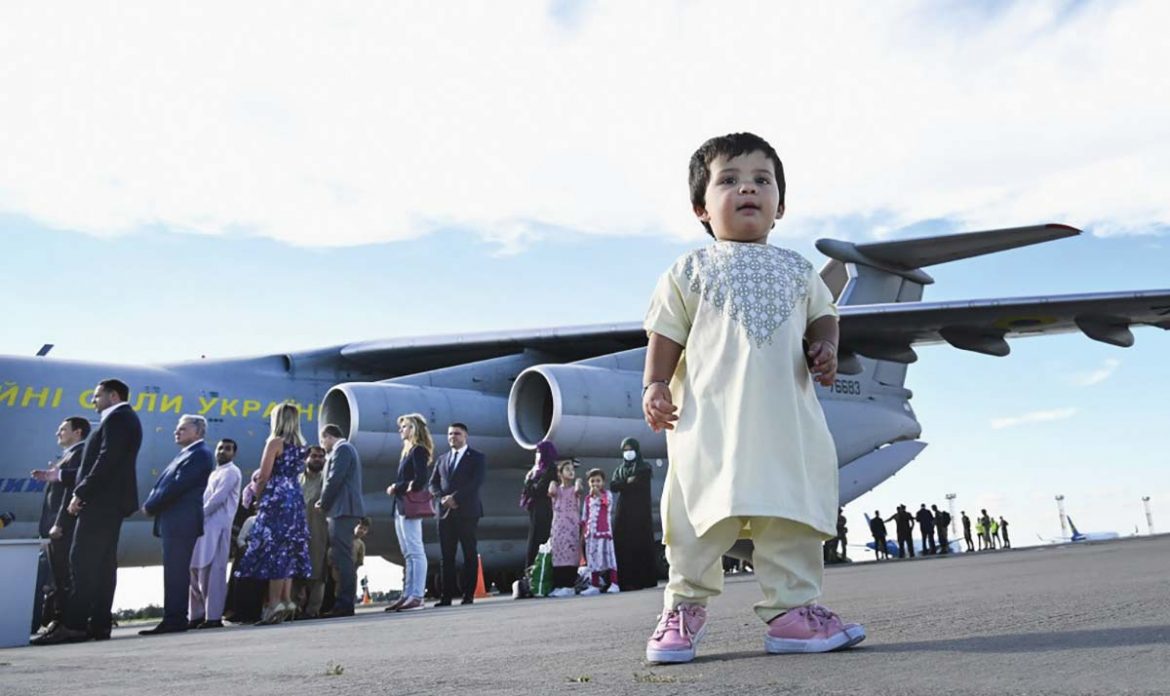 An Afghani toddler who was among the 19 people evacuated by Ukrainian military personnel in a daring mission on August 27 stands on the tarmac at the Boryspil airport in Kyiv the following day.

LVIV – Members of the Ukrainian military stationed at the airport in the Afghan capital of Kabul conducted a bold operation in the early morning hours of August 27 to evacuate Afghani translators working with the Canadian army and a Canadian newspaper.

The operation to rescue the translators took place a day after the last Canadian plane took off from Afghanistan and hours after a terrorist attack took place at the gates of Hamid Karzai International Airport. After the attack, the United States said it would allow only foreign nationals to enter the airport, but not Afghans with visas.

Despite the limitation, and with a growing risk to coalition forces ahead of the planned withdrawal of the last U.S. force on August 31, Ukrainian special forces troops marched into the city to escort two minibuses filled with 19 Afghans to the airport so that they could be evacuated.

The soldiers, using photos of the license plates on the minibuses, identified the correct vehicles. They surrounded and escorted the vehicles so that they could travel the final 600 meters to the airport.

“The convoy entered [the airport] because the Ukrainians came out. We just sent them the plate numbers of our vehicles, and they came to the local bazaar to find us,” Mohammed Sharif Sharaf told the Canadian newspaper The Globe and Mail, which first reported the story.

“They [the Afghani translators] said ‘Ukraine?’ We said ‘Yes!’ and they took us inside,” said Mr. Sharaf, a 49-year-old father of five who spent 10 years as a fixer and translator who worked with The Globe and Mail to cover Canada’s role in the war in Afghanistan.

Two previous attempts, one by the Canadian military and another by the U.S. State Department, to evacuate citizens from the airport in Kabul were unsuccessful. As a result, Mr. Sharaf’s group could not get to the airport to leave the country. In the failed operations, the Canadians and their families needed to reach specific meeting points near the airport gates, but doing so proved impossible amid the chaos.

“The Ukrainian operation succeeded where others had failed because the Ukrainian military deployed special forces troops into the city on foot to conduct the rescue,” journalist Mark Mackinnon of The Globe and Mail reported.

The evacuees said they were stunned that Ukrainian troops had taken such a great risk to save them. The risk was too great for Canadian and U.S. troops.

“Everybody was surprised. I tried for the last month to have someone get us. We asked the Americans, the Canadians, the Qataris, everybody – and no solution. They were scared to come out,” said Jawed Haqmal, a 33-year-old father of four who for two years worked with Canadian special forces in Kandahar.

“The Ukrainian soldiers were angels for us. They did an exceptional job. They have big hearts,” Mr. Haqmal said.

Roman Waschuk, who served as Canada’s ambassador to Ukraine from 2014 to 2019, helped coordinate the special operation by connecting personnel working for The Globe and Mail with a senior official in Ukraine’s Presidential Office.

“It is a story of altruism, courage, ability and gratitude,” Mr. Waschuk wrote on his Facebook page, “about how Ukrainian special forces rescued 19 Afghans at the request of Canadians – and that was due to their readiness to go outside the security zone of the airport in Kabul – which no one but them dared to do last Friday.”

Mr. Waschuk said, he believed that the Ukrainian military agreed to conduct the rescue mission because of Canada’s support of Ukraine in defending the country against Russian aggression. Since 2014, Canada has provided Ukraine $700 million in financial assistance and has deployed 200 troops on a rotational basis since 2015 on a mission to train Ukrainian forces for battle.

“This is, in part, a return on the investment of successive Canadian governments in training Ukraine’s military,” Mr. Waschuk wrote.

“There’s a lot of respect and appreciation for what Canada’s done over the past seven years,” said Mr. Waschuk.

“I must admit that when I started making my first contacts, I didn’t really believe that anything would come of this Ukrainian venture. But the already active and sympathetic position of the foreign policy apparatus of the presidential office [of Ukraine] encouraged me. The 19 Canada-connected Afghans extracted from the chaos of Kabul consider them [the Ukrainians who conducted the rescue mission] guardian ‘angels.’ Canadians can be grateful that we have such fearless partners,” the former ambassador wrote.

“This courageous operation by Ukrainian special forces shows the strong bonds of friendship and long-standing close ties between Canada and Ukraine,” said Alexandra Chyczij, national president of the UCC.

“The Ukrainian forces acted with boldness, valor and fearlessness. In the terrible circumstances in Afghanistan, Ukraine has demonstrated that it has Canada’s back, and we are grateful to them.”

“Our military, intelligence and diplomats have done a brilliant job. Ukraine does not leave its citizens in trouble in difficult times and helps others!” Mr. Zelenskyy wrote on Twitter after a fourth Ukrainian plane helped evacuate people from Afghanistan.

“We have already evacuated all Ukrainian citizens who have expressed a desire to leave Afghanistan. Of course, there may still be people who are in other parts of Afghanistan. If they apply, we will use all our opportunities, diplomatic contacts to continue the evacuation,” Andriy Yermak, the head of Ukraine’s presidential office said during a briefing at Kyiv’s Boryspil airport.

Ukraine’s Ministry of Foreign Affairs told The Ukrainian Weekly that it plans to continue evacuating Ukrainians from Afghanistan after August 31.

“At the same time, the return routes of our citizens can be adjusted, depending on the development of the situation at Kabul airport,” said Oleh Nikolenko, spokesman for the Ministry of Foreign Affairs of Ukraine.

“Security risks in the country continue to grow. In the last few days, the Ministry of Foreign Affairs and the Embassy of Ukraine in Tajikistan have witnessed a new wave of requests for evacuation from Afghanistan. The embassy is now clarifying the details of the people involved, their number, location and we are liaising with them,” a statement from the ministry said.

Mr. Nikolenko said that Ukraine has already conducted six evacuation flights in unprecedentedly difficult conditions. Those flights have evacuated more than 650 people, making Ukraine among the most successful countries which have helped people flee Afghanistan.

“Protecting the rights and interests of Ukrainian citizens abroad is one of the top priorities of the foreign policy strategy. Ukraine does not give up, and the evacuation from Afghanistan once again proves this principle by concrete actions,” Foreign Affairs Minister Dmytro Kuleba wrote on his Facebook page.