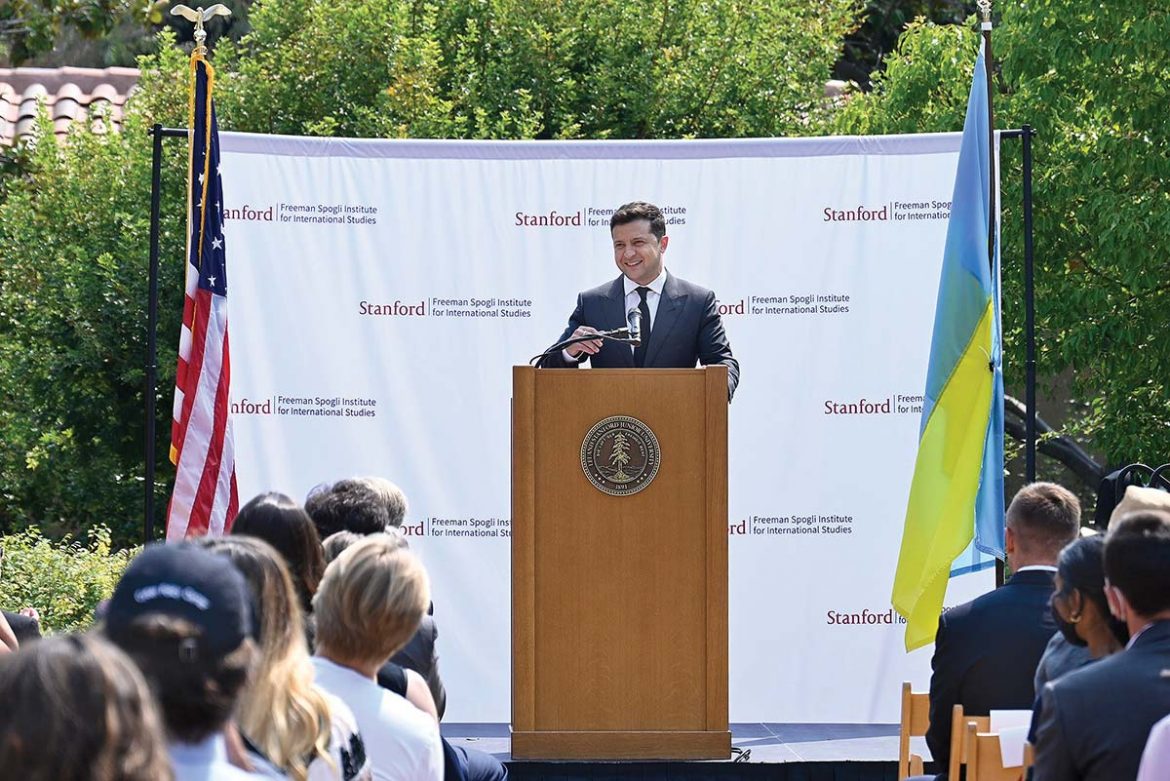 Ukrainian President Volodymyr Zelenskyy during his speech at Stanford University on September 2.

LVIV – During an official visit to the United States, Ukrainian President Volodymyr Zelenskyy addressed a group of students, academics and entrepreneurs at Stanford University on September 2. Mr. Zelenskyy spoke on the topics of digitalization, dual citizenship, Belarus and the dynamic growth of the IT sector in Ukraine, according to the office of the Ukrainian president.

Mr. Zelenskyy was welcomed to the university by Francis Fukuyama, the director of the Center on Democracy, Deve­lopment and the Rule of Law at Stanford University, and Michael McFaul, director of the school’s Freeman Spogli Institute for International Studies.

Mr. Zelenskyy said he was honored to speak at Stanford University.

The Ukrainian president underscored that “everything is possible” is not only his personal credo but also a symbol of modern Ukraine.

In keeping with that theme, he compared Ukraine with Apple and himself with Steve Jobs, stressing that Ukrainians believe everything is possible.

“Ukrainians have often proved to humanity that anything is possible. That it is possible to create the first helicopter, an artificial satellite that can travel around the Earth, the world’s largest aircraft and, by the way, WhatsApp,” Mr. Zelenskyy said, referring to the popular mobile phone application.

“I once wrote to a friend on WhatsApp that we as a country have not created anything like the first helicopter, an artificial satellite around Earth or the world’s largest aircraft for a long time – about 30 years. We wanted to change that. It turns out that the only option for this was to become president and bring other, new people to power,” Mr. Zelenskyy said, adding that this proves once again that anything is possible.

During his Stanford speech, Mr. Zelens­kyy used the opportunity to promote his presidential program called Big Construction. He said that a few years ago, there were terrible roads in Ukraine, which made it impossible to drive quickly from one city to another. There were also complicated and lengthy bureaucratic procedures needed before anything could be done, and he said he wanted to change that. The president told his audience that Ukraine is now building thousands of kilometers of roads and hundreds of bridges, building planes, helicopters, tanks and navy again.

“Ukraine, which opposes one of the most powerful armies in the world – the army of the Russian Federation – it’s territory is annexed and occupied,” Mr. Zelenskyy told his audience.  “And in these conditions, Ukraine is building a democratic, free, open state, creating an anti-corruption system of institutions, a unique system of electronic declaration for officials, minimizing the influence of oligarchs on the economy and politics, simplifying business, reforming the banking sector, launching transparent auctions for exploration and extraction of natural resources, introducing effective and transparent corporate governance, launching a transparent land market for the first time since independence, bolstering the rule of law and reforming the judiciary. How is it doing all this?” Mr. Zelenskyy asked.  “By believing that anything is possible.”

“Yes, I am in favor of dual citizenship,” Mr. Zelenskyy said.  “This issue is being considered among Ukrainian parliamentarians. But it is essential to think about whether it is really the right time today. You know about Russia handing its passports to the people of Crimea for the last 20 years. And now it continues on the territory of the temporarily occupied Donbas. About 600,000 Russian passports have been distributed in our Ukrainian territories, which are now occupied.”

The Ukrainian president added that legislation on dual citizenship can not be universal in Ukraine. Rather, he said, the decision to grant dual citizenship must be made on a case-by-case basis and dependent upon the country in which the applicant holds their other citizenship.

“Therefore, dual citizenship would be voted on by parliamentarians very quickly in peacetime today. And we must defend our borders very seriously today,” Mr. Zelenskyy said in response to the question posed by Mr. Bilogorskiy, who was the director for security intelligence at Google. He also co-founded the charity organization Nova Ukraine to deliver humanitarian aid and increase awareness about Ukraine globally.

Mr. Zelenskyy was also asked what he would tell Belarusians about their current political situation.

“I wish you [Belarus] the same result that Ukraine got – a democratic and very free country. It is your people, faith, language, life and art that are stronger than any government, and there are no eternal governments,” Mr. Zelenskyy said.

“We understand what is happening to you, and we also understand that the same thing happened to us. But this path – I do not want you to go the way that Ukraine did, the people of Ukraine, families who lost their lives for the struggle for the freedom of their people, for the freedom of their beautiful country,” said Mr. Zelenskyy, who finished his response with the Belarusian saying, “Zhyve Belarus!” (Long live Belarus!).

During his speech, the Ukrainian president also recalled that he and his team once sat in a small office and generated ideas that no one believed in, which is what initially happened to Apple founder Steve Jobs, Mr. Zelenskyy said.

“Now we see the creation of Steve Jobs and Apple – the iPhone,” Mr. Zelenskyy said while holding his smartphone in his hand. “This is his heart, and it beats, beats with every vibration during a call or SMS. And our Ukrainian creation – a state in a smartphone [the mobile application Diia] – is in it. And today, 26 million Ukrainians online, in a smartphone, can register documents on the birth of a child, use other digital documents, get a building permit, open a business in 7-15 minutes – faster than in most countries [via the Diia app]. Ukraine has become the first country in the world to have a digital passport,” Mr. Zelenskyy said.

He also emphasized that the goal for the coming year in Ukraine is to ensure that 100 percent of public services can be performed online. And, in the future, the Ukrainian president said that all citizens of Ukraine will be able to vote in elections online.

“Digitalization is one of the priority reforms in Ukraine. It is moving forward very successfully and quickly. The outcome of this reform is a victory over any medium, and over petty corruption in the state,” Mr. Zelenskyy said.

“The American dream is known all over the world. But we lost a lot of time – we do not have time to dream. We have no dreams – we have a Ukrainian goal. And this, of course, is not just digitization. We bring our people back. It is crucial for us: to return Crimea, to return Donbas. We will be a strong and successful country – the leader of Europe. Why am I sure of this? Because anything is possible. And I invite all of you to Ukraine to see it for yourself,” Mr. Zelenskyy said as he concluded his speech at Stanford University.