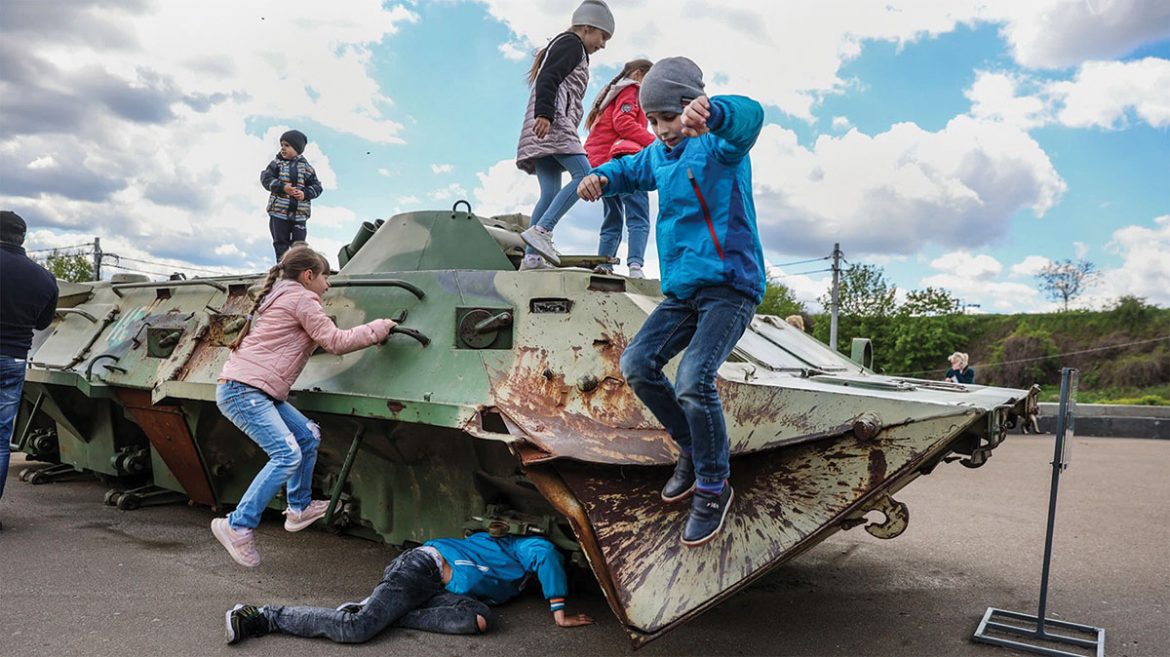 Children in Ukraine play on a Soviet-era tank in a museum dedicated to World War II artefacts.

KYIV – In an attempt to combat Russian propaganda over “the Red Army’s glorious victory” during World War II, the Ukrainian government has in recent years largely shifted toward adopting Western traditions that commemorate the end of the war.

Every year, an ever-larger number of Ukrainians have taken to marking the occasion on May 8, a day of remembrance and reconciliation. The day is also designated by a resolution of the United Nations General Assembly as the Time of Remembrance and Reconciliation for Those Who Lost Their Lives. Previously, Ukrainians traditionally commemorated Victory Day on May 9, a Soviet-era holiday that marked the surrender of Nazi Germany in 1945.

However, during a period of continued Russian armed aggression against Ukraine, the government in Kyiv has sought to distance itself from Russian ideological symbols as part of its effort to fight what officials here call a hybrid information war.

On May 8 Ukrainian President Volody­myr Zelenskyy visited the “Ukraine for Liberators” memorial complex in the town of Milove in the Luhansk region in eastern Ukraine, where 2,814 soldiers were buried in a mass grave. Milove became one of the first Ukrainian towns occupied by the Red Army, replacing the occupation by Nazi Germany.

Ambassadors from the G-7 countries and the EU accompanied Mr. Zelenskyy on his trip to Milove.

For the second year in a row, Mr. Zelenskyy visited Ukraine’s easternmost region on the Day of Remembrance and Reconciliation and the eve of Victory Day. Traditionally, the Ukrainian head of state laid flowers at the Eternal Flame and honored those killed during World War II battles defending the homeland.

Mr. Zelenskyy also visited the Bell of Remembrance at the memorial. The memorial currently houses the first of four bells that will be located throughout Ukraine, the installment of which was initiated by the president a year ago.

Four bells will symbolize the memory of the dead and reconciliation between countries who fought during World War II: a Bell of Remembrance in the Luhansk region, a Bell of Victory in the Zakarpattia region, a Bell of Peace in Donetsk, and a Bell of Unity in Simferopol, which will be installed after the temporarily occupied territories are returned to Ukrainian control.

Public opinion polls in Ukraine show that Ukrainians are largely split about commemorations of WWII, with 41 percent saying they believe that two dates should be celebrated in Ukraine: Remembrance and Reconciliation Day on May 8 and Victory Day on May 9. Meanwhile, 31 percent say the commemoration should take place on May 9, according to a survey conducted by the Ilko Kucheriv Democratic Initiatives Foundation and the Razumkov Center’s sociological service.

Another 9 percent support the idea of ​​celebrating only Remembrance and Reconciliation Day on May 8, while 10 percent don’t care which day is commemorated. In the western regions of Ukraine, 22 percent of survey respondents said commemorations should take place on May 8, while in the southern and eastern regions of the country, 48 and 42 percent, respectively, say the country should celebrate the anniversary on May 9.

The survey also found that 48 percent of respondents agree that World War II began due to a conspiracy between Hitler and Stalin to divide spheres of influence in Europe via the Molotov-Ribbentrop Pact, while 29 percent did not believe that to be the case and 23 percent did not provide an answer to the question.

Additionally, the survey found that 46 percent of Ukrainians believe that the Soviet Union would not have won the war without the help of the Allied powers, while 35 percent did not believe the Soviet Union needed the help of the Allied powers to Nazi Germany and 19 percent said the question was difficult to answer. Young people aged 18 to 29 were more likely to agree (51 percent) than older people (among people over age 60, 43 percent agreed and 39 percent disagreed).

The survey also asked respondents whether they were pleased with Ukraine’s decision to recognize soldiers of the Ukrainian Insurgent Army (UPA) as fighters for Ukrainian independence. Forty-six percent said they were, while 29 percent said they were not. The UPA has its largest base of support in the western and central oblasts of the country.
In his address on May 8, Mr. Zelenskyy noted that commemoration of World War II affects people throughout the world.

“We live in a world where there are more than 7,000 different languages,” Mr. Zelenskyy said. “But there is a special one that unites many nations of the world every year on May 8, the Day of Remembrance and Reconciliation, when we cry in one language. When we are silent in one language, it is a language of boundless honor and respect for the memory of the millions of people who died in World War II.”

Mr. Zelenskyy underlined that more than eight million Ukrainians died during World War II, more than the population of Kyiv, Odesa, Kharkiv, Lviv and Dnipro combined.
“Every year, together with the whole civilized world, we say ‘never again,’” Mr. Zelenskyy stressed. “If we imagine the impossible for a moment and assume that humanity has been allowed to change its history once, I am sure that all people on Earth would choose the only option: to avoid and prevent World War II.”

Mr. Zelenskyy added that it is important to remember and commemorate the past in order to avoid repeating the horrors of World War II.

“Unfortunately, we cannot avoid war in the past. But we can and must do everything we can to prevent a new war in the future,” Mr. Zelenskyy said, adding that world leaders must demonstrate that humanity has learned from the events of 1939-1945.

The Ukrainian president also urged world leaders to not be silent about Russian aggression and support Ukrainian territorial integrity.

“Isn’t it time to put an end to this issue? Isn’t it time to prove the devotion to the slogan ‘never again’ in practical terms?” Mr. Zelenskyy asked, drawing a connection to current events in Ukraine and Russian aggression in the region.

“Today, our courageous men and women defend the Ukrainian state, our sovereignty and territorial integrity. For the sake of peace and prosperity of independent Ukraine,” Mr. Zelenskyy said, “may the memory of all those who died during the Second and, I believe, the last World War, live forever.”

The traditional annual public appearances of pro-Russian politicians did not go unnoticed. Former leader of the banned Communist Party Petro Symonenko led a group of about 100 people, many carrying red flags, to the Eternal Flame. The small group chanted “glory to Stalin,” sang Soviet songs, laid flowers and left.

Ukraine’s Foreign Affairs Ministry released a statement saying, “For many decades, we hoped that war would never come to Ukrainian soil again. But in 2014, Russia launched a military aggression against Ukraine and occupied part of our territory. Today, Ukraine is defending not only itself but the whole of democratic Europe. That Europe, which arose on the ruins of World War II, is united by a central idea – Never Again.”

“We believe that one day peace will return to Ukraine,” said Ukraine’s Minister of Defense Andriy Taran. “Peace as an opportunity to choose your path of civilization. Peace – but by no means surrender to the enemy.”