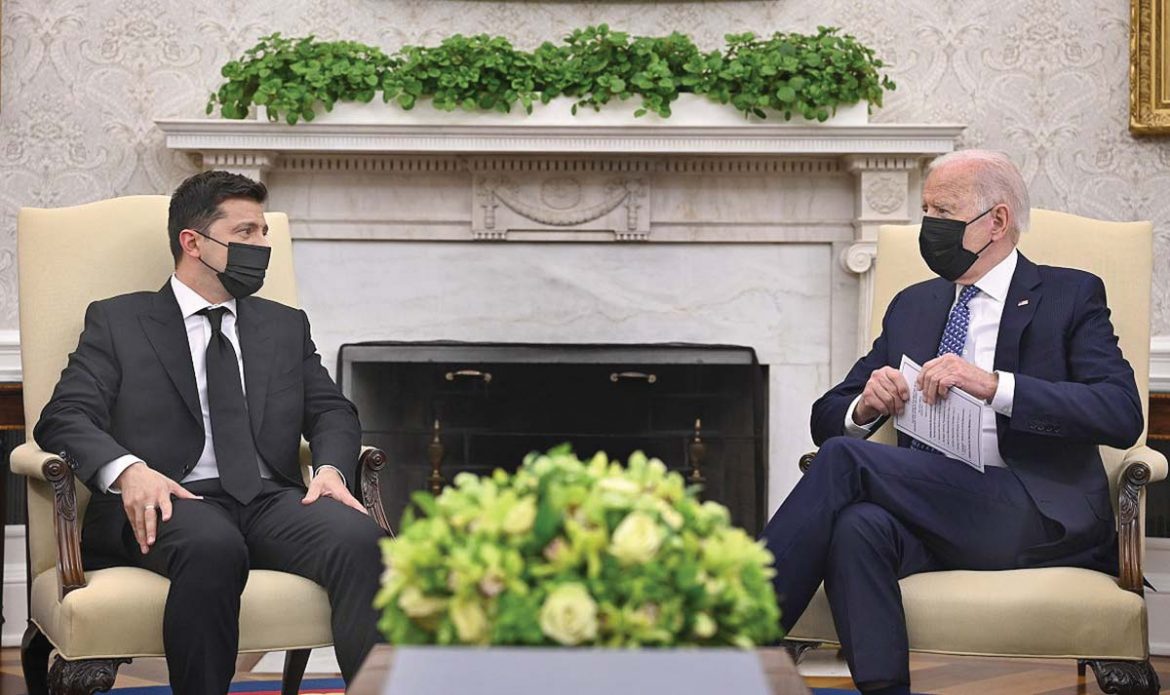 WASHINGTON – President Joe Biden assured his Ukrainian counterpart Volody­myr Zelenskyy that the United States stands behind Kyiv against “Russian aggression” in a widely anticipated meeting at the White House.

“The United States remains firmly committed to Ukraine’s sovereignty and territorial integrity in the face of Russian aggression and our support for Ukraine’s Euro-Atlantic aspirations,” Mr. Biden told the Ukrainian president in the Oval Office on September 1.

“The partnership between our nations grows stronger, and it’s going to even become stronger than it has been,” he added.

Mr. Zelenskyy arrived at the White House saying he had a “very big agenda” to discuss, with a focus on security and Ukraine’s ambitions to join the NATO alliance.

“I would like to discuss with President Biden his vision, his government’s vision of Ukraine’s chances to join NATO and the timeframe,” he said.

But Mr. Biden has made clear he considers Ukraine far from ready to join the alliance, with the country still in need of vast reforms and Russia strongly opposing the prospect of NATO membership.

“We’re going to discuss how the U.S. can continue to support Ukraine as it advances its democratic reforms agenda and movement toward being completely integrated in Europe,” Mr. Biden said.

Russia took control of Crimea from Ukraine in March 2014 after staging a referendum dismissed as illegal by at least 100 countries. Moscow also backs separatists in a war against government forces that has killed more than 13,200 people in eastern Ukraine since April 2014, although it has consistently denied any role in the fighting.

Mr. Zelenskyy won an election in 2019 on a platform of trying to end the war in eastern Ukraine, and also tackle the country’s notorious deep-seated corruption, including the undue influence of powerful businessmen known as oligarchs, and clean up the country’s court system.

Though Mr. Zelenskyy has moved to target some powerful business interests, especially those with Russian ties, the reform effort is seen as sputtering and Western donors have grown impatient.

Ahead of Mr. Zelenskyy’s meeting with Mr. Biden, the United States announced it would release a $60 million tranche of military aid for Kyiv. The new package, which includes more sophisticated anti-tank missiles, comes on top of the $400 million in annual spending that Washington provides Ukraine. Washington says it’s provided more than $2.5 billion to Ukraine since 2014.

“Russia’s buildup along the Ukrainian border has highlighted capability shortfalls in the Ukrainian military’s ability to defend against a Russian incursion,” the White House said in a statement accompanying the announcement.

“Ukraine’s significant capability gaps must be urgently addressed to reinforce deterrence in light of the current Russian threat,” it added.

“The United States is our strategic partner and a supporter of our sovereignty, and our territorial integrity,” Mr. Zelenskyy said at the start of the meeting with Mr. Biden.

He thanked Mr. Biden for the additional military aid as well as more than 2 million COVID-19 vaccines. 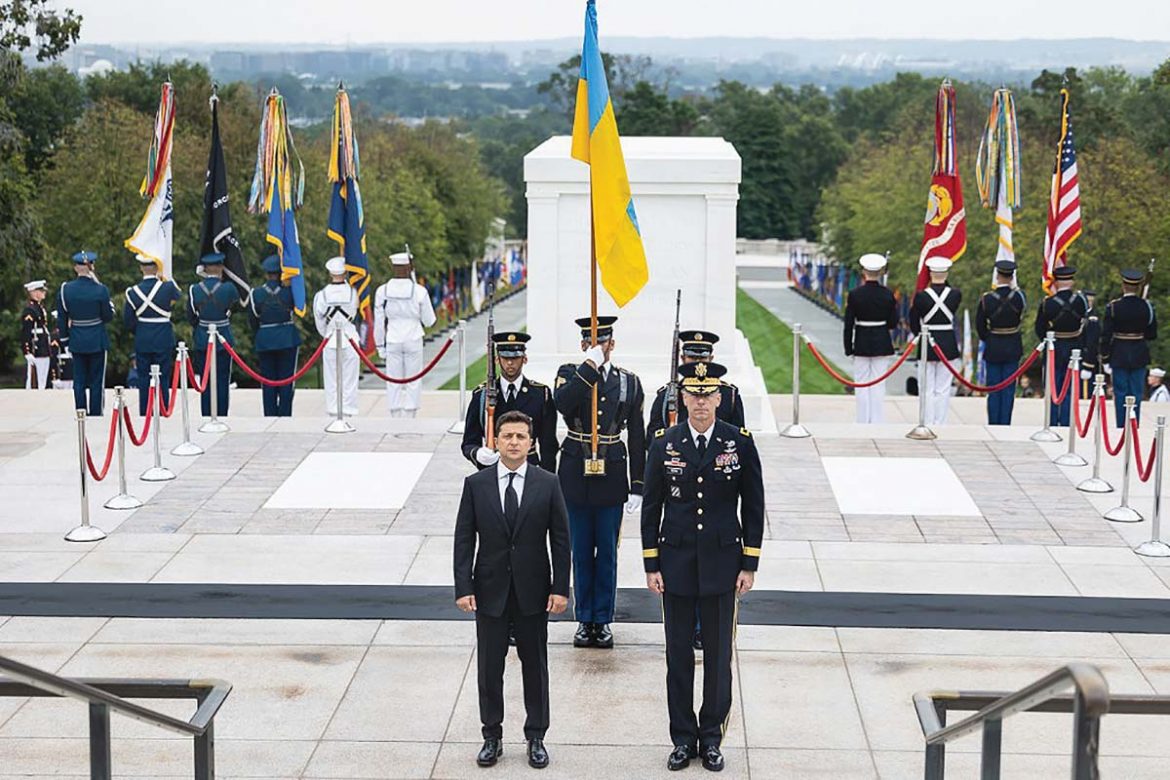 Mr. Zelenskyy had said earlier this week that Ukraine needs “not just words” but action from the West to help deter Russian aggression and end a conflict that has raged for seven years.

During his meeting with Mr. Biden, Mr. Zelenskyy was expected to raise Washing­ton’s decision not to block construction of the Nord Stream 2 natural gas pipeline that is set to bring Russian gas to Germany under the Baltic Sea, bypassing Ukraine.

Critics of the pipeline project – which is nearly completed – argue it will strengthen Moscow’s energy hold on Europe and cut Ukraine off from lucrative gas-transit fees, amounting to billions of dollars annually.

Mr. Zelenskyy has described the new pipeline as a powerful geopolitical weapon.

Mr. Zelenskiy said he will use the one-on-one meeting to ask Mr. Biden to get involved in the dormant peace talks to end the conflict in eastern Ukraine. 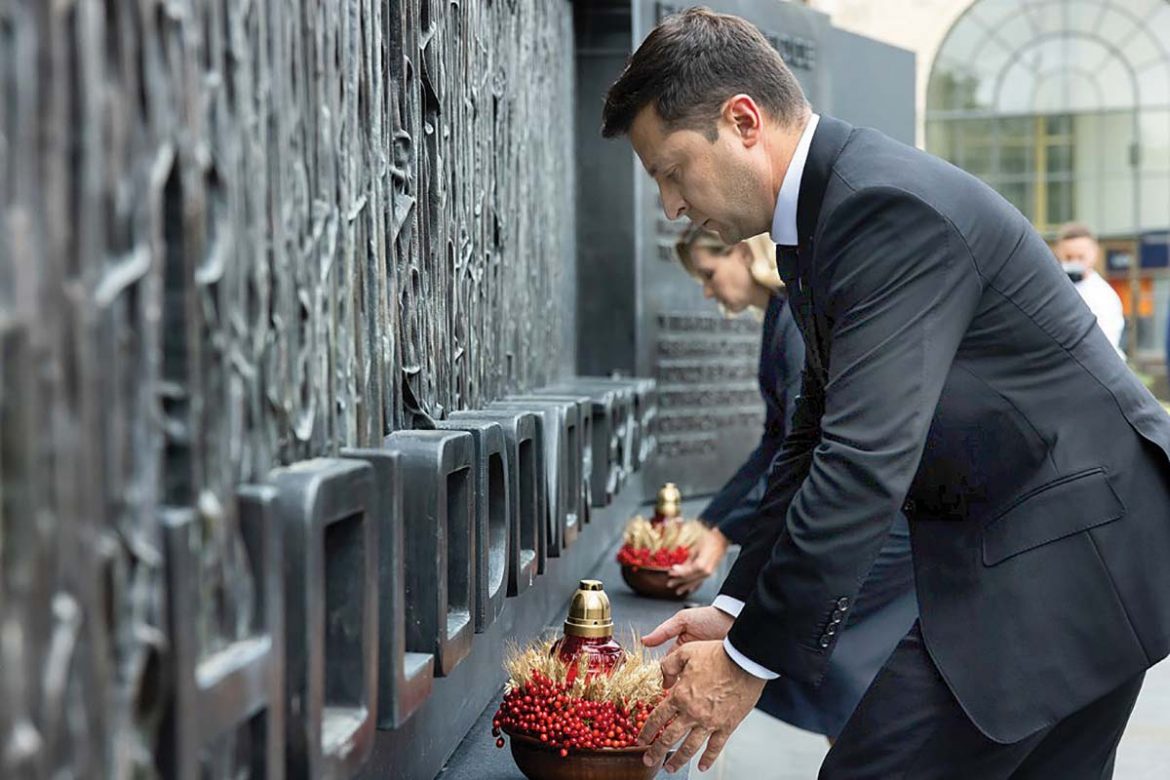 Ukrainian President Volodymyr Zelenskyy and his wife Olena Zelenska place symbolic sheaves of wheat at the National Holodomor Memorial in Washington on August 31.

The main partners in the effort include France and Germany, along with Ukraine and Russia, but some Ukrainian officials are skeptical of the support received from Berlin and Paris, and have pushed for more involvement by Washington to breathe life into the peace process.

The United States created the position of special envoy for peace talks, but that role has been left unfilled since September 2019. The Biden Administration is not expected to fill the position, a U.S. State Department official told RFE/RL ahead of the meeting.

The Oval Office visit is the culmination of a multiyear effort by the Zelenskyy Administration to secure the meeting, an effort in large part intended to send a message to Moscow that Washington firmly supports Kyiv.

Shortly after Mr. Biden won election in November, Mr. Zelenskyy expressed optimism that the new administration would be a better fit for his country than his predecessor, Donald Trump.

Mr. Trump accused Kyiv of interfering in the 2016 election on behalf of his opponent, former Secretary of State Hillary Clinton. He also pressured Mr. Zelenskyy in 2019 to dig up dirt on Mr. Biden and the work of his son Hunter in Kyiv, triggering an impeachment trial that all but brought bilateral relations to a standstill for the rest of Mr. Trump’s term.

Under Mr. Trump, the United States did keep a range of Ukraine-related sanctions measures, targeting Moscow, in place; the Trump Administration also finally authorized the delivery of the Javelin anti-tank missiles – something that President Barak Obama had declined to do, fearing it would antagonize Moscow.