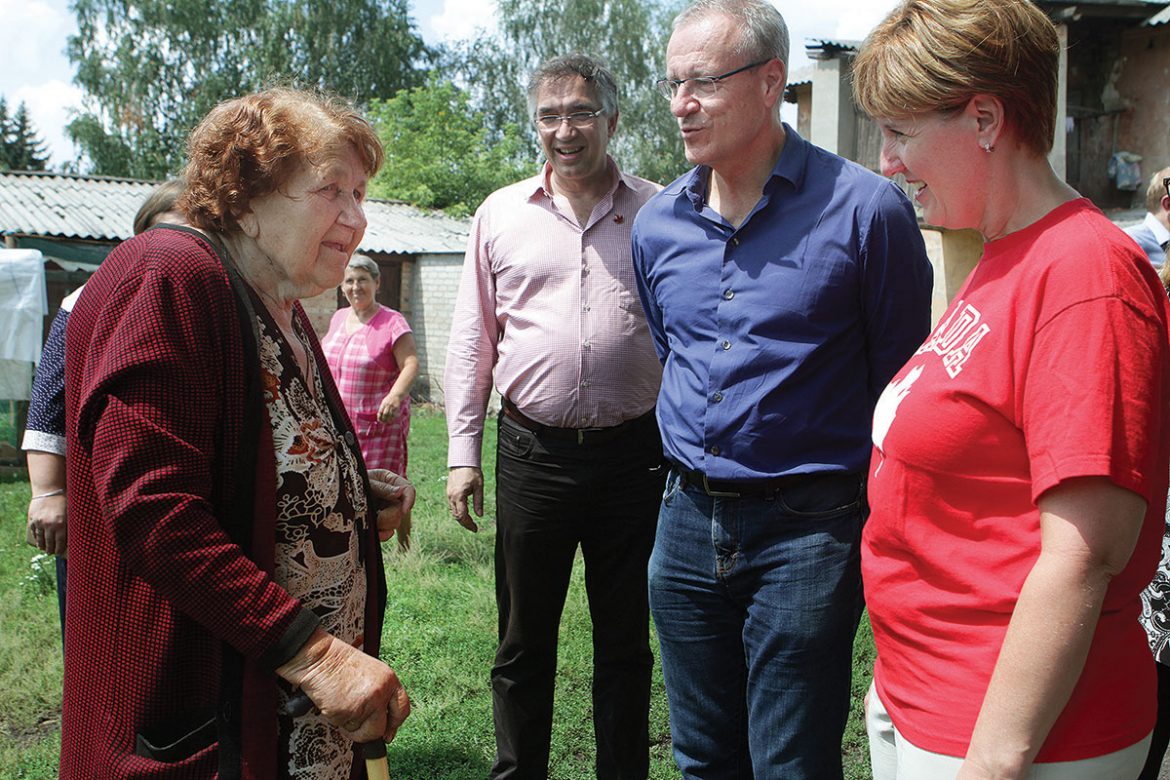 Office of the Minister of International Development

Canada’s Minister of International Development Marie-Claude Bibeau (right) and her team, including Ambassador to Ukraine Roman Waschuk and MP Borys Wrzesnewskyj, meet with women from frontline village of Kurdiumivka, located 9 kilometers from the line of contact in Ukraine’s east, to learn about their key challenges and coping mechanisms.

OTTAWA – Since becoming Canada’s minister of international development in 2015, Marie-Claude Bibeau has led missions to 30 countries, but had never visited Ukraine until this month when she spent five days, from July 18 to 23, mainly in the country’s war-torn eastern region.

Ms. Bibeau, who before entering politics three years ago worked for the Canadian International Development Agency that was folded into Canada’s Foreign Ministry in 2013, has also never spent as much time in a country as minister as she did in Ukraine.

In fact, no previous Canadian minister has been on the ground in Ukraine for as long – and none have come anywhere close to Ukraine’s grey zone, according to Ukrainian Canadian Member of Parliament Borys Wrzesnewskyj, who accompanied Ms. Bibeau on her recent trip.

On an official level, the major takeaway from the minister’s visit was her announcement on July 19 in Kyiv that as part of the Canadian government’s $50 million (Canadian, or about $38 million U.S.) annual commitment toward assistance programs in Ukraine, $30 million ($23 million U.S.) of that money will fund projects to “enhance” the economic security of rural women – particularly those caught up in the conflict in eastern Ukraine – as well as projects that will provide support for small and medium-sized businesses, and “increase employment and entrepreneurship opportunities for women, and for vulnerable and marginalized groups,” according to a Canadian government release. 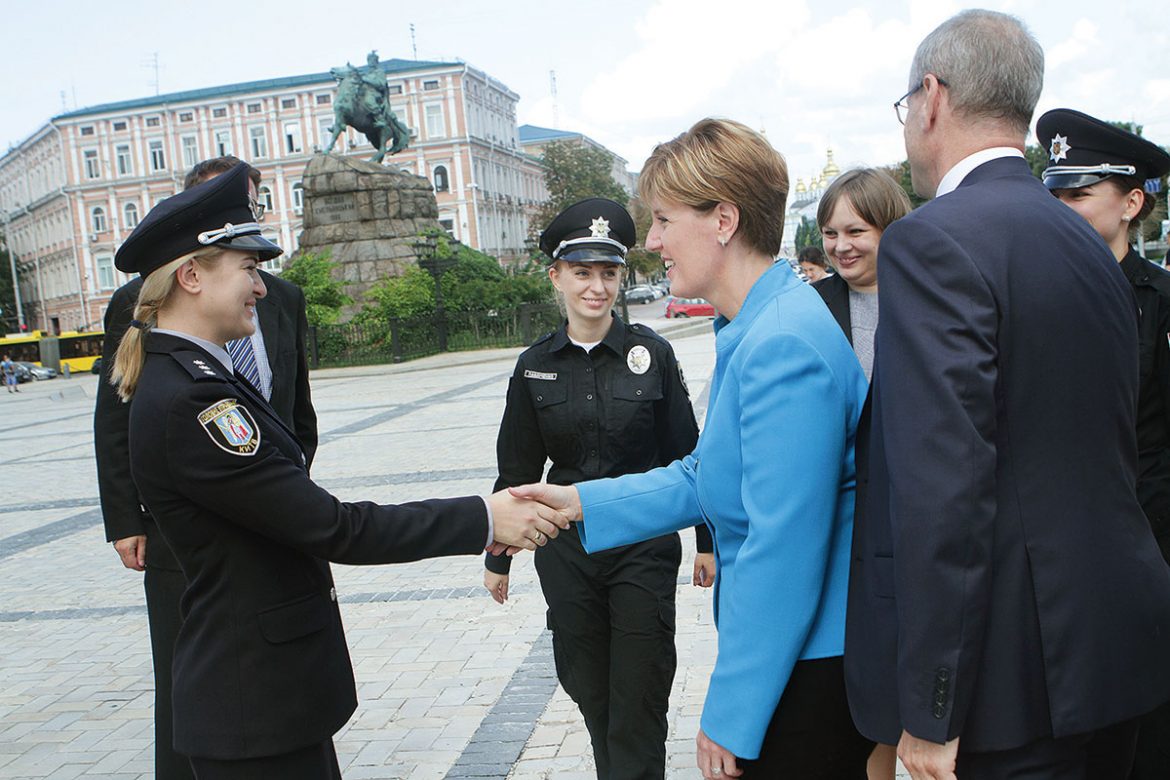 Office of the Minister of International Development

The Canadian minister in Kyiv with members of the Ukrainian Association of Women in Law Enforcement.

But at a personal level, Minister Bibeau has acquired a greater appreciation for what’s needed in Ukraine following her visit.

“Life is not easy,” she said in a July 22 telephone interview from Kharkiv International Airport following a meeting with Ukrainians who have to regularly cross the Ukrainian-controlled checkpoint at Mayorsk in the Donetsk region.

“They told me this checkpoint is working very well, but they didn’t have such good words for the checkpoint on the other side that is controlled by the pro-Russian forces,” she said.

Mr. Wrzesnewskyj said that one man told him and the minister that he has to regularly cross the faux-border to purchase medicine on the Ukrainian-controlled side, where it is a third of the price charged in the occupied territory. “He said that on the Ukrainian side, things are more efficient, and people get processed within five minutes on the Ukrainian side. Whereas he said it took him six hours on the other side. But he said that’s not the worst. Sometimes you could wait a full day. It depends on the mood of the soldiers on the other side.”

Ms. Bibeau said she was also told that seniors living on the Russian-controlled side must check in on the Ukrainian side every two months to ensure that they continue receiving social assistance or pensions from the Ukrainian government. “It’s quite a challenge for those who are older or disabled, and who have to wait for hours,” she said. 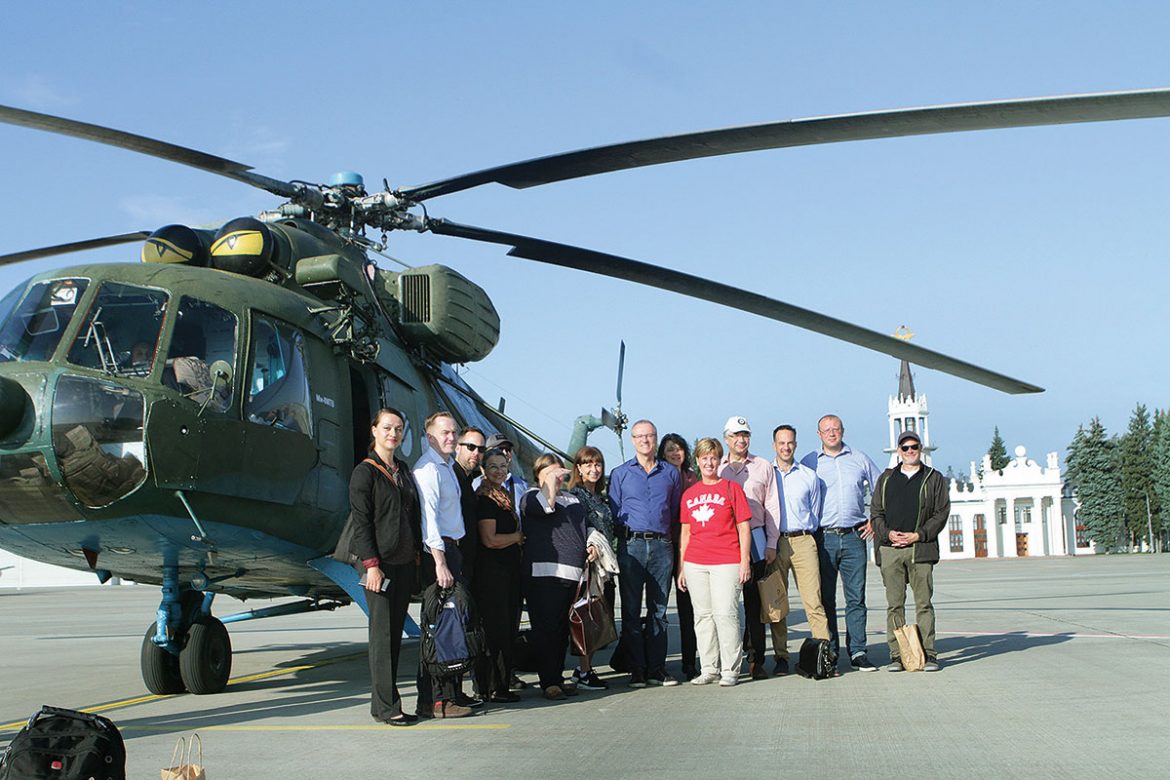 The Canadian minister of international development and her team prepare to fly to Kramatorsk by military helicopter.

“But unlike other regions of the world, you don’t feel hate. People don’t want this war. They want it to end. The contact line is separating families. People don’t have drinking water because the infrastructure has been destroyed and it’s right on the border, so it’s not safe to be repaired,” she continued. “There are so many people suffering. They have to sleep in their basements on a regular basis because they hear gunfire, and showed me the damage done to doors and windows of their homes.”

Added Mr. Wrzesnewskyj: “One thing that really came through was how artificial this war is. We heard it over and over from the people coming across the line of contact, and we heard it from a couple of villages we traveled to in the grey zone that have regularly been shelled. No one understands why there is war.”

“In the West, there’s a narrative that the Kremlin has been very good at propagating – that this is a civil war. I’ve traveled through civil-war zones, and this is not one. People don’t have a lot of respect for the [Russian] proxies and their regime; they are not happy that this war was launched against Ukraine – but they don’t have hatred,” he explained.

“We heard over and over that people have family on both sides of the border, and they don’t understand why there is fighting,” Mr. Wrzesnewskyj said. “This is something that Western politicians need to hear firsthand.”

Minister Bibeau explained that the funding package she unveiled will address some of the fallout from the war in the Donbas by helping to stimulate Ukraine’s economy, such as by supporting agricultural cooperatives and creating jobs, especially for men unemployed because of the conflict. 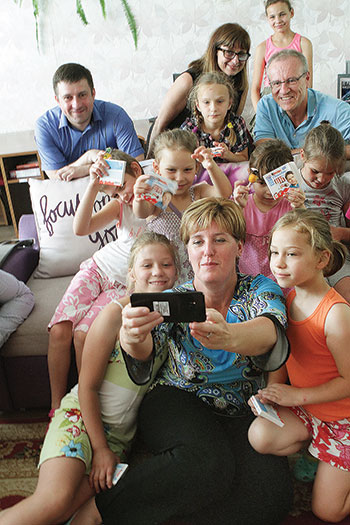 “When men lose their jobs, some start drinking and we end up seeing much more domestic violence,” explained Ms. Bibeau, who visited a women’s shelter in Kharkiv that has received funding from the Canadian government.

Mr. Wrzesnewskyj, who also spoke to The Ukrainian Weekly from Kharkiv, said the shelter initially targeted women from among the estimated 250,000 people forced to flee their homes because of the war, and who had suffered some form of abuse, typically from their husbands.

“A psychologist told us that there is a real culture of violence, which you normally have in a conflict zone, but which has also developed in the two so-called people’s republics [of Donetsk and Luhansk],” he explained.

“Everything is based on power and violence, and everything is resolved in violent ways. There will be some substantive issues in the future when this Russian war against Ukraine ends. The people of this region will have lived for years under a culture of violence that saturates their lives, which has all kinds of consequences on families – and often women bear the brunt of that.”

Mr. Wrzesnewskyj, a Liberal member of Parliament for the Toronto riding of Etobicoke Center, said the shelter has expanded its reach to provide shelter and psychological support for women and their children living in and around Kharkiv, Ukraine’s second-largest city with a metropolitan population of more than 1.7 million people. Mobile units are also available to provide emergency support.

Alexandra Chyczij, first vice-president of the Ukrainian Canadian Congress, who was with Ms. Bibeau and Mr. Wrzesnewskyj in Ukraine, remembered their visit to the shelter and had high praise for the minister.

“She met with some of the women who are being sheltered and we were both reduced to tears,” said Ms. Chyczij, a lawyer by profession, who was part of a group of lawyers from the diaspora that attempted to assist Ukraine with legal reform shortly after the country gained independence in 1991.

“Our minister led this mission with amazing grace. She has a genuine interest in the lives and fate of the people in Ukraine, and her compassion was evident in her conversations with the people we met,” Ms. Chyczij observed.

Mr. Wrzesnewskyj witnessed the same social dynamic with Ms. Bibeau as they visited four cities and four towns during their five days in Ukraine.

“She wanted to talk with people and ask questions, and people in Ukraine want to talk and want people to know,” he said. “Some of the stories she heard were very hard, and I saw how the minister’s eyes welled up listening to very personal stories they shared with her.”

As Mr. Wrzesnewskyj highlighted, Ms. Bibeau is the first government minister from a G-7 country to visit the conflict zone in eastern Ukraine, and can now bring to Prime Minister Justin Trudeau’s Cabinet table first-hand experience that complements the knowledge of Ukraine of her Ukrainian Canadian and senior Cabinet colleague, Foreign Affairs Minister Chrystia Freeland.

Minister Bibeau, who met with Prime Minister Volodymyr Groysman in Kyiv, left Ukraine with several impressions of its people.

“They are very resilient, but very suspicious in the beginning, until you gain their trust,” she said, before boarding a flight to Kyiv.

“In the east, people are very, very poor. Seniors don’t want to leave their homes because that’s all they have – and they have kids in different cities in Ukraine and Russia, and don’t get any support from them,” she noted. “This is something I don’t understand. They are in safe cities, but [seniors] I spoke to said they hadn’t seen their kids since the beginning of the war [in 2014].”

“I was very impressed with the reforms that I saw regarding the police and health sector,” said the minister, who added that she also met with Ukraine’s acting minister of health, Ulana Suprun, an American-born physician who moved to Ukraine with her husband in 2013 and participated in the Revolution of Dignity on Kyiv’s Maidan the following year.

“To me, this woman is a national hero for having gone back to the country of her origin when the Maidan started,” said Ms. Bibeau.