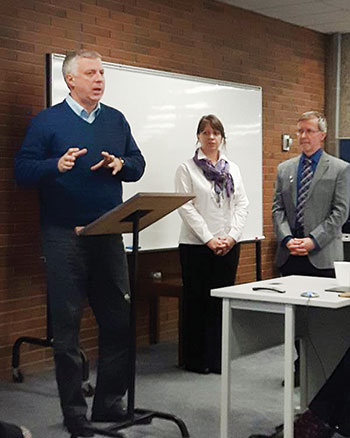 EDMONTON, Alberta – The Faculty of Education at the University of Alberta hosted a symposium on December 8-9, 2016, about the progress of reforms in higher education in Ukraine. The event was attended by Dr. Serhiy Kvit, former minister of education and science of Ukraine, along with leading analysts from several countries. It was presented as part of the Research Initiatives on Democratic Reform in Ukraine (RIDRU) project.

On the first day, the program concentrated on recent developments in higher education in Ukraine. Dr. Kvit’s presentation focused on how greater autonomy is being promoted in academic, financial and administrative affairs at Ukrainian universities, helping to prevent rectors and senior officials’ participation in the corruption that currently dominates the government and society.

Dr. Kvit, who currently serves as director of the Center for Academic Quality Assurance at Kyiv Mohyla Academy, also spoke about challenges of academic integrity, merging teaching universities and the Academy of Sciences (where advanced research is done), low salaries and awards, the strategy of faculty and student mobility inside Ukraine and internationally, empowering student government, requiring English for graduate studies and reducing bureaucracy. If not improved, each of these components hinders Ukraine’s universities in creating communities of independent scholars who can work on par with their Western colleagues, thereby damaging the country’s ability to compete economically.

Dr. Anatoly Oleksiyenko from the University of Hong Kong spoke about the Soviet legacy and colonial mentality that leaves today’s young scholars passive and unmotivated, with few rewards. Most Ukrainian universities are still functioning within many of the Soviet structures and methods. Students have few opportunities to develop critical inquiry and problem-solving skills; universities are still managed by Soviet-trained executive officers, and have not yet become modern self-learning organizations. In the past, 40 percent of university work in the USSR was tied closely to military objectives, and humanitarian faculties were subsumed within the official ideology. 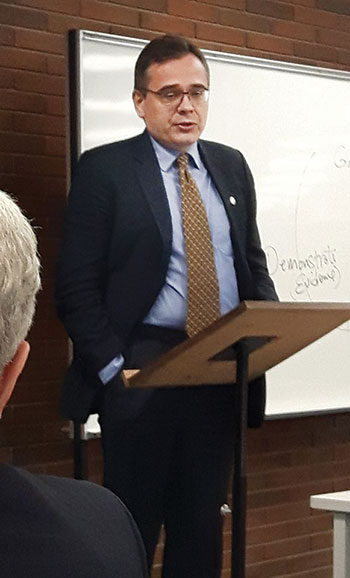 This has resulted in post-secondary institutions that do not resemble Western universities in which faculty and students are taught as individuals to do analytical work based on evidence that enables original ideas to be invented. Instead plagiarism and mindless routine has Ukrainian professors replicating information from Russia or from Europe without their own vision for higher education. The dominant mentality is fear of new knowledge, dependence on decisions from the level above and a disengagement from responsibility, Dr. Kvit noted.

Prof. Jerry Kachur, Department of Educational Foundations, University of Alberta, compared Ukraine, Greece and Turkey, all on the Black Sea, with regard to whether they are strong or weak nations and states. He situated the region within global political and economic trends, such as the new online systems of communication, the emergence of strong political leaders destabilizing existing alliances, and the emergence of the corporate university that minimizes the value of intellectual thought. He challenged Ukrainian reforms to avoid substituting one colonial model for another.

Dr. Corlett observed that, as public institutions, universities are obliged to be socially responsible and to use public funds wisely, efficiently and effectively. Therefore, it is not unreasonable that governments will see themselves as having a duty to oversee the activities that universities undertake. The question, then, is how governments can provide that oversight without intervening in the collegial governance and academic freedom that defines the best of university activity. Can such tension ever be fully resolved? Does government ideology, however benign or extreme, have any role in determining what universities research and teach? Who is best positioned to know what knowledge is valuable and worth studying and teaching? 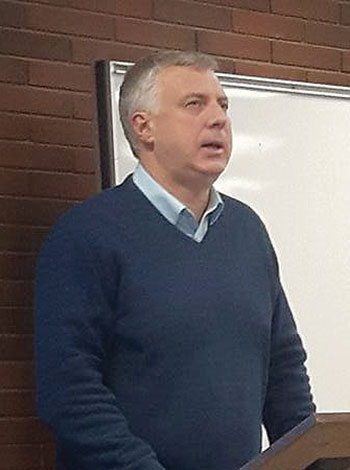 Dr. Goebel made observations about the challenges arising from insufficient intellectual and political leadership to, first, consolidate consensus on education reform with stakeholders (e.g., students, faculty, social institutions), and then, to formulate a roadmap of change activities that can provide the framework for broad social and political support for change. He noted both the depth and breadth of other participants’ analyses, including historical and social-political momentum from the former Soviet system, but also suggested that there is ample evidence for educational components that require change, but no evidence of consolidated plans to effect that change. He also admitted ignorance of only indirect connection with the reality of precipitating change, but noted further analysis is not required to see direction for change.

Day two of the symposium was dedicated to the theme of building the infrastructure of a 21st century university in Ukraine. The four topics presented contrasted structures in Western universities with those emerging in Ukraine: 1) student government; 2) overcoming barriers of access to post-secondary education; 3) quality assurance; and 4) strategic planning for cultural transformation.

The session on student government heard presentations from Zarina Khalimon (president of the Kyiv-Mohyla Academy Student Government), Cassian Soltykewych (University of Alberta graduate and president of the Ukrainian Canadian Students Union, or SUSK), Stephanie Nedoshytko, (councillor of the Students Association of MacEwan University and external relations director of SUSK) and Fahim Rahim (president of the University of Alberta Students Union). Discussion focused on the election process, governance system, management and impact of student unions at universities.

Four speakers spoke to the theme of overcoming barriers of access to post-secondary education for students with special needs. The first presentation was given by Abigail Parrish-Craig, chair of Services for Students with Disabilities at MacEwan University, and by Amorena Bartlett, a student ambassador from MacEwan, who will be travelling to Ukraine in May to meet with deaf students. The second speaker was Dr. Ihor Kobel from Ukrainian Catholic University (UCU), who reviewed Ukrainian legislation and described his university’s plans to open an office at UCU modelled on that of MacEwan University. Finally Dr. Tim Loreman (vice-president academic and provost, Concordia University in Edmonton) spoke about both the importance and the limits of inclusive education at Canadian universities.

The topic of quality assurance was addressed by Prof. Peter Mahaffy of the King’s University in Edmonton. As co-chair of the Campus Alberta Quality Council (CAQC), Dr. Mahaffy spoke about the principles and system on which CAQC operates. His presentation was followed by that of Tetiana Antoniuk, deputy director of the Center for Academic Quality Assurance at Kyiv-Mohyla Academy, which is the first university in Ukraine to establish its own internal center for quality assurance.

Dr. Jeffrey Stepnisky, chair of the Sociology Department at MacEwan University, spoke about the importance of cultivating scholarship and the culture of ongoing self-evaluation aimed at personal and professional growth as prerequisites for quality teaching, learning and research in a contemporary university.

Dr. Olenka Bilash, professor in the Department of Secondary Education, University of Alberta, presented a number of strategic initiatives used to transform predominantly teaching departments to cultures of research during her tenure as associate dean of the Faculty of Graduate Studies and Research. She also described the evolution of the enterprises of teaching, research and community-university engagement in North American higher education institutions and the emergence of the new culture of performativity.

During both afternoons of the symposium, participants divided into discussion groups to formulate suggestions on what Canadian faculty members and administrators might do to assist the reform process in Ukraine. Their recommendations were presented prior to the last presentations of the event and are summarized on the RIDRU website.

At the closing roundtable five speakers – Drs. Kvit, Oleksiyenko, Kachur, Petryshyn and Bilash – discussed what was learned, what we have contributed and suggested next steps. Symposium organizers agreed to participate in the June 2017 conference being organized on the same theme at the Ukrainian Catholic University in Lviv.

This event was made possible by the generous contribution of the Faculty of Education conference fund and the continued support of the Kule Institute for Advanced Studies (KIAS), University of Alberta, the Ukrainian Foundation for College Education (UFCE), the Alberta Foundation for Ukrainian Education Society (AFUES) and RIDRU’s partners.

Presentations from the symposium were recorded and can be viewed online by clicking on http://ridru.artsrn.ualberta.ca/.