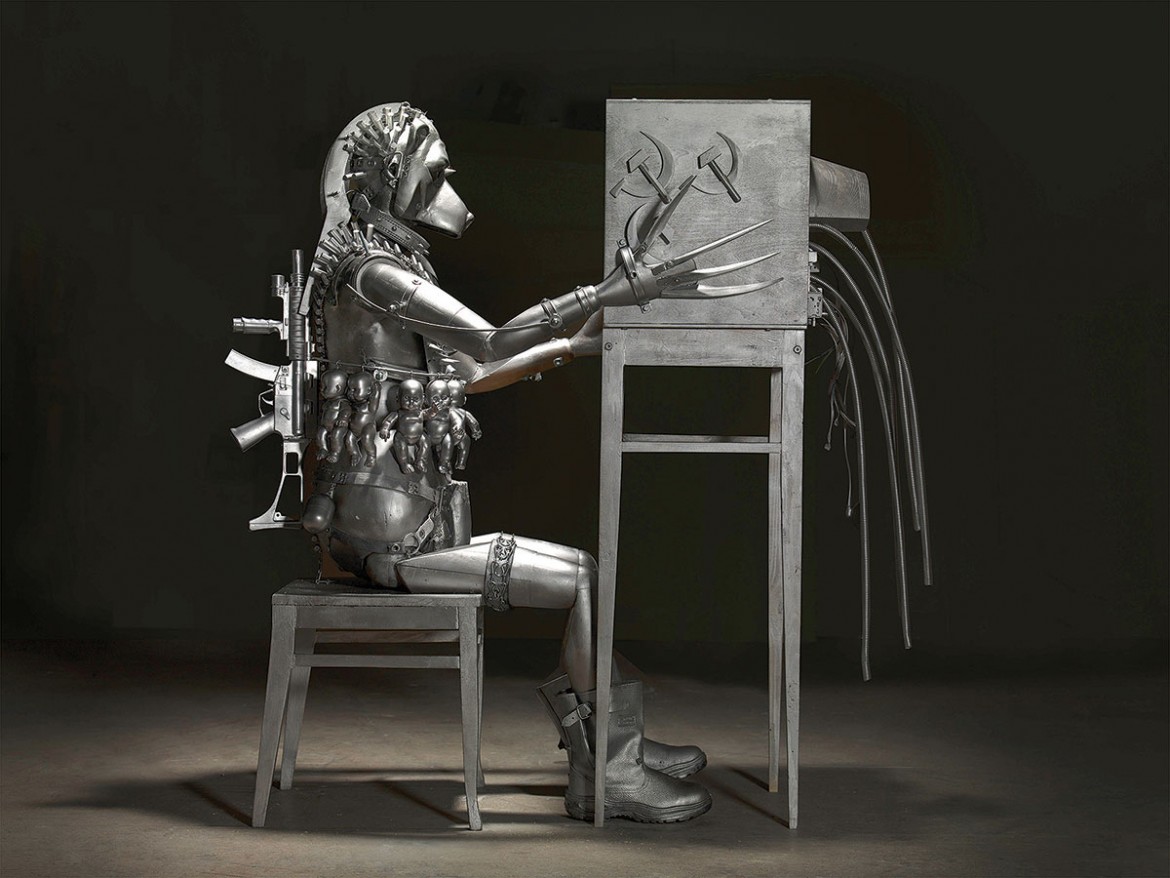 “The Roadcasting,” installation by Mykola Zhuravel.

NEW YORK – An exhibition by Kyiv-based artist Mykola Zhuravel titled “Invasion Redux” opened at the Ukrainian Institute of America on January 22 and is on view through February 14. The artist’s paintings, artistic photographs, three-dimensional panels, installations and videos depict the tragic events of the hybrid war being brutally waged by Russian and Russian-backed forces in Ukraine.

Mr. Zhuravel offers the visitors a look at the current events in Ukraine not in the form of a realistic documentary but as a metaphorical and phantasmagoric reflection with elements of surrealistic grotesque. 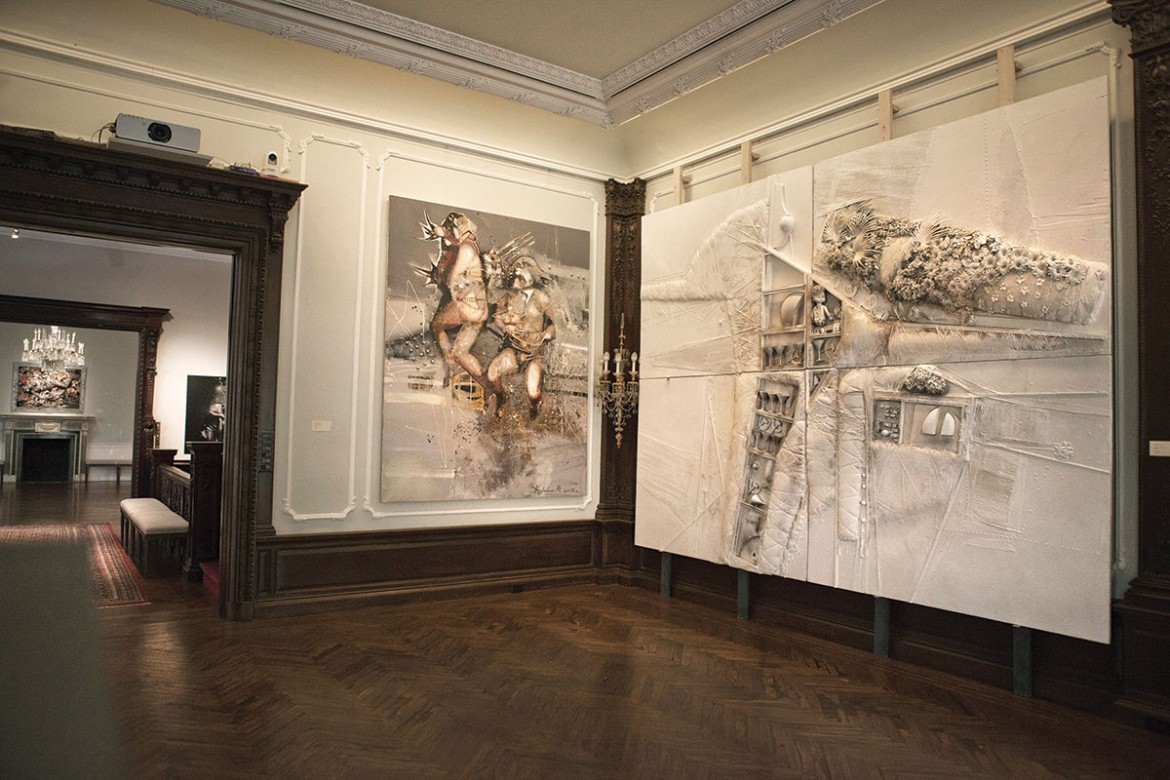 A view of the exhibition “Invasion Redux” at the Ukrainian Institute of America.

The centerpiece of the exhibition is an installation in the exhibition hall that includes a “zombie-box” (TV), providing Russian propaganda non-stop, and a “human” sitting in front of the “zombie-box” who has already been turned into a zombie. His face has acquired the look of an aggressive bear and his body is covered with warts of war accoutrements instead of clothing.

After each “zombie broadcast,” this main antihero multiplies in quantity and is found in the pictures and artistic photographs co-authored by the artist’s wife, Daria Tishchenko-Zhuravel. Visitors will see the zombie in the midst of the personal belongings and toys from Flight MH17 shot down by Russian terrorists; zombies towering above Kyiv buildings, etc.

Every exhibited artwork reveals the tension of events in eastern Ukraine. The artists’ creations have incredible power, enabling visitors to not only understand but also to feel the tragic impact of the hybrid war Russia is conducting in Ukraine.

Ukraine celebrated the Day of Unity on the opening night of the exhibition. A wave of flashmobs on the theme “United Ukraine” took place on this occasion everywhere Ukrainians live. During the opening ceremony, Igor Sybiga, consul general of Ukraine in New York, suggested that all create their own flashmob. Thus, visitors gathered near the panel representing a “Landscape of War” holding small placards with the slogan “United Ukraine” in their hands.

The exhibit was opened with introductory remarks by Walter Hoydysh. Mr. Zhuravel shared the idea behind his creative concept, explaining that this exhibit is his visceral response to the tragic events in Ukraine’s east. 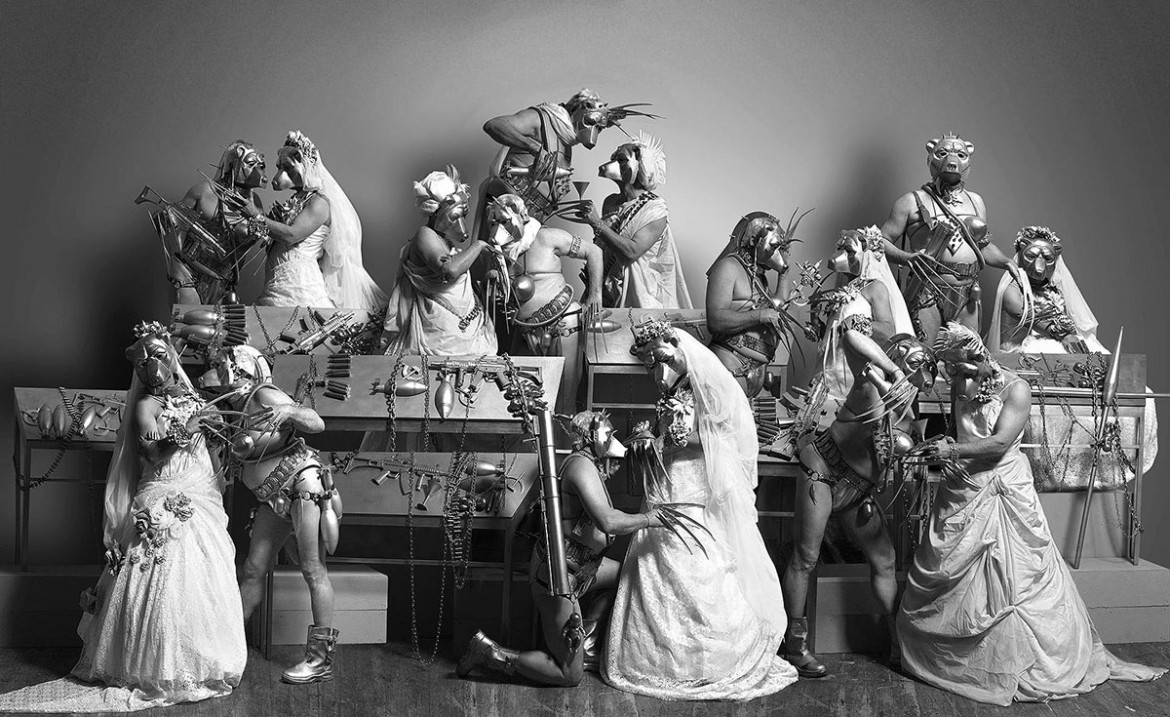