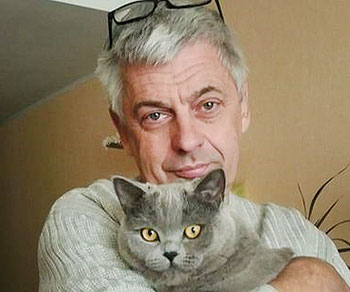 Journalist Vadim Komarov of Cherkasy, Ukraine, died on June 20 of injuries sustained in a savage attack on the morning of May 4. He had been in an artificially induced coma ever since. There is nothing to suggest that the police have made any progress in finding either those who carried out the attack or, as seems likely, those who ordered it.

As reported, Mr. Komarov was an investigative journalist from Cherkasy known for hard-hitting material, including about corruption and embezzlement by the local authorities.

Valery Makeyev, the secretary of the National Union of Journalists and seemingly a friend of the journalist, reported shortly after the attack that Mr. Komarov had been expecting to receive some “shocking information” on that very evening. Mr. Makeyev believed that this was from sources within the law enforcement bodies about how a high-ranking official in the City Council had committed certain illegal actions and was allegedly trying to escape justice by pretending to be psychologically disturbed.

It was evident from comments both from journalist colleagues and others writing on social media that Mr. Komarov was viewed as a person who touched on subjects that others wanted to see concealed.

There has been no information about the course of what has now become a murder investigation since the police initially called for witnesses of the attack. Mr. Komarov was found lying on the ground in the center of Cherkasy shortly after 9 a.m. on May 4, a Saturday. Three blows had been dealt to his head, with the weapon probably a hammer or something similar. Neither his mobile phone nor money were removed, making it clear that robbery was not a motive.

This was the second attack on Mr. Komarov, after a person tried to shoot him in September 2016. Mr. Komarov then explained that somebody had knocked at his window. He assumed it was a person coming to read the gas or electricity meters and went outside. He had only poked his head around the side of the gate and was able to slip back inside when he saw a man aiming a gun at him. The shot hit the brick fence instead, and the assailant fled.

At the time, he said he believed the attack was linked to his investigations and material in local and Kyiv Internet publications, however, the police investigation was for “hooliganism” and no one was caught.

Mr. Komarov was in a coma for a month and a half and, although he himself never regained consciousness, it is hard to believe that there are no leads to a fatal attack in the center of the city. Mr. Makeyev writes that he addressed some hard-hitting questions to the police two weeks ago “regarding absolutely obvious things linked with the Vadim Komarov investigation which in my opinion are strangely eluding the attention of the investigators. He also suggests that the investigation seems unnecessarily secretive. He has so far received no answer to his questions.

Mr. Komarov was married with an adult daughter who is, or at least until the attack was, living in Germany.