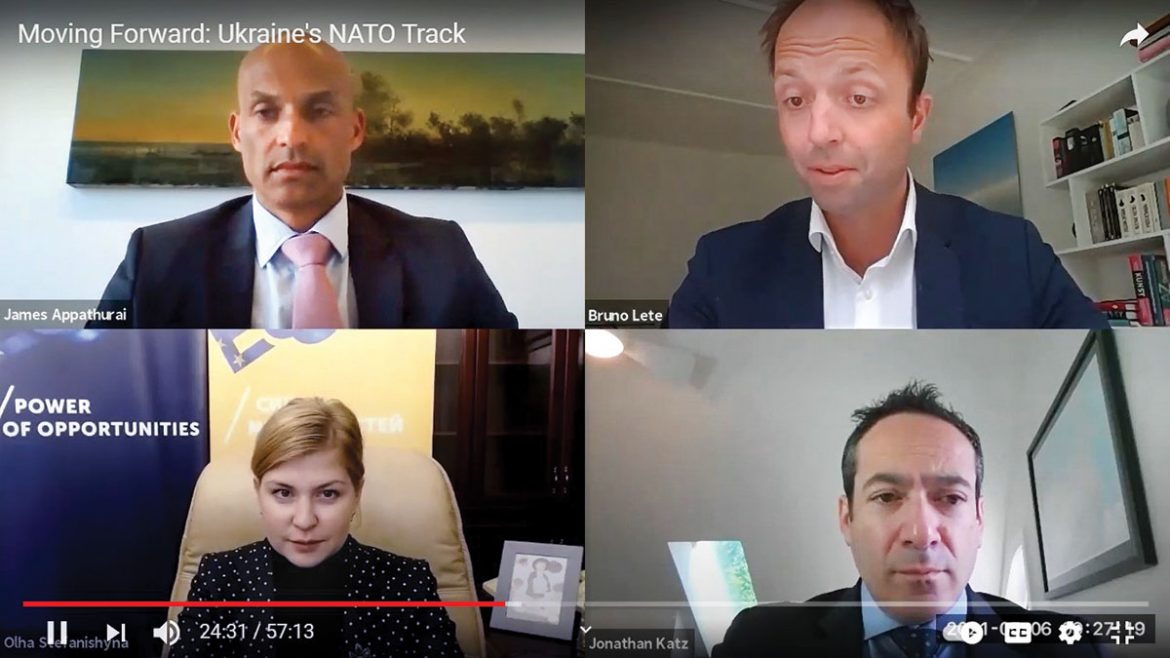 The event’s moderator, Bruno Lete, a senior fellow at the German Marshall Fund (GMF) in Brussels, noted that the NATO-Ukraine “relationship has gone quite a way since both parties engaged diplomatically in the early 1990s. From just being a country bordering NATO’s Article 5 territory, Ukraine evolved into being a partner to the alliance,” Mr. Lete said. “Ukraine has shown its political and military will and ability to grow closer toward NATO, but challenges remain.”

At a 2008 summit in Bucharest, NATO recognized Ukraine’s aspirations to join the alliance and stated that the country would one day become a member, but declined to grant Ukraine a Membership Action Plan (MAP), considered to be the next step on the way to joining the alliance. It was the same case for Georgia. At the time, some said that not granting Kyiv and Tbilisi an action plan would help placate Russia.

During her presentation, Ms. Stefani­shyna asserted that now, 13 years later, a MAP remains long overdue and that delaying the program for Ukraine, as well as Georgia, hasn’t deterred Russian aggression.

“The argument that Russia will attack Ukraine if NATO would… step up in closer integration with Ukraine, including a decision on MAP, just ignores the reality,” Ms. Stefanishyna said.

Russia has in fact been waging a war against Ukraine since 2014 and has engaged in military aggression against Georgia as well.

Avoiding a MAP for Ukraine and Georgia has “not made our region safer and stable,” Ms. Stefanishyna said. It is, instead, “sending basically not a very good signal to the Kremlin.

And starting this [MAP] process would, vice versa, give a signal that the transatlantic unity is there and, basically, Russia has no vote in NATO on the issues related to strategic development and materialization of the open-door policy.”

Ms. Stefanishyna said that Ukraine is already a significant contributor to European and transatlantic security through its participation in numerous NATO military operations and she urged the alliance to think about the strategic importance of Ukraine:

“When it comes to Ukraine it’s also very important to say that Ukraine is part of a very big geopolitical agenda and very big geopolitical transformations, which are expected by our nation but also by many nations across the Atlantic, but also in Europe,” Mr. Stefanishyna said. “Our cooperation with the alliance is also a very effective response to the challenges faced both by our country and NATO, given the ongoing critical changes in the global security landscape… We are standing ready to be a contributor to Euro-Atlantic security – in particular Ukraine sees that it can be a strategic partner of NATO in the Black Sea… [And] we see that Black Sea security and a strategy for Black Sea security as a separate priority… We are also ready to intensify cooperation with NATO in this endeavor. And we call upon allies to really prioritize this agenda in their bilateral, but also, in transatlantic strategy.”

Ms. Stefanishyna stressed that “we really believe that cooperation should not be a substitute for integration” and that moving forward on membership for Ukraine would deter Russia’s destabilizing activities and bring stability to the region. Ukraine sees MAP as a plan of irreversible reforms that should be implemented, she said.

The deputy prime minister acknowledged that a successful reform agenda will help make Ukraine a “stronger and more reliable” partner and pave the wave for integration with NATO and the European Union. She said that Ukraine is moving forward on a number of reforms in the security and defense spheres that will help bring Ukraine in line with NATO standards, including such areas as the security service, intelligence services, classified information, the military-industrial sector and “real civilian control over the armed forces.”

Ms. Stefanishyna also talked about the challenges of adopting and implementing judicial and anti-corruption reforms that are necessary for both NATO membership and launching a complete democratic transformation of the country. She said Ukraine, led by President Volodymyr Zelenskyy, remains committed to judiciary reform and anti-corruption measures, but there are many “groups of interest” and “influencers” who are “trying to undermine this process.”

In what might be reassuring for many friends of Ukraine who believe Ukraine’s reforms have mostly stalled, the deputy prime minister acknowledged that “it’s time for really tough decisions and real reform to take place” in Ukraine. She also noted that becoming an Enhanced Opportunities Partner of NATO has served as a powerful new catalyst for Ukrainian reform efforts and obtaining a MAP would do even more to unite Ukrainian political elites around the reform agenda.

Ms. Stefanishyna concluded her remarks with a reminder of the very serious ongoing threat from Moscow and the need for transatlantic unity among democratic countries.
“When we start talking about the future, there is one thing that we know for sure,” Ms. Stefanishyna said. “We know that Russia has a master plan and we know what this master plan is. My question is whether it’s time for us – for the West and for democracies – to have a master plan, to become stronger and unified?”

Ms. Stefanishyna spoke at an online forum titled “Moving Forward: Ukraine’s NATO Track,” which was co-organized by the German Marshall Fund, the Reanima­tion Package of Reforms and the Trans­atlantic Task Force on Ukraine. The other prominent speaker at the event was James Appathurai, deputy assistant secretary general for political affairs and security policy at NATO.

In his presentation, Mr. Appathurai expressed confidence that at their upcoming summit in June, NATO leaders would again state their commitment to leaving the door open for Ukraine and other aspirants to join NATO, saying it should be “reassuring.”
He also lauded Ukraine’s commitment to future integration with NATO.

“In the case of Ukraine,” Mr. Appathurai said, “it [the commitment] is undeniably there, it’s enshrined in the Constitution, it is clear in regular political statements from the highest level but, also, it’s evident in the practical cooperation that we have, starting with the very substantial Ukrainian contribution to NATO operations and missions, to the NATO response force, to our cooperation in the Black Sea, to our situational awareness in the Black Sea. So, Ukraine’s commitment is clear to us.”

Mr. Appathurai went on to describe the various tools that are in place to help the NATO-Ukraine partnership develop further, including the annual national program, the comprehensive assistance package, two NATO offices in Ukraine, millions of euros in funding for programs, support for reforms in areas like democratic governance, anti-corruption, human rights and economic stabilization.

“The establishment of anti-corruption institutions that are robust – that’s really very important for allies, but, of course, first and foremost, it’s important for Ukrainians,” Mr. Appathurai said.

In the security and defense sectors, the deputy assistant secretary general at NATO acknowledged progress in Ukraine in terms of firmer establishment of civilian control over the military and democratic oversight over security structures. These are changes that are moving forward despite Russia’s ongoing war against Ukraine. And he touted the benefits of Ukraine now being recognized as a NATO Enhanced Opportunities Partner, which is an important interoperability initiative.

Despite all the dynamism in NATO-Ukraine relations, there is still no consensus within the alliance on granting Kyiv a MAP, Mr. Appathurai said.

“[T]here are allies who are concerned, and they are concerned because Member­ship Action Plan as a mechanism, as a tool, doesn’t bring security guarantees with it,” Mr. Appathurai said. “Only membership brings security guarantees, meaning collective defense. And what they worry is that granting MAP without the security assurances of membership raises risk for the aspirant without assurances or additional security. And, so, what they believe is what we should prioritize is the practical cooperation, and work on the politics.”

The other challenge in terms of getting a MAP now, Mr. Appathurai said, relates to the situation with implementation of reforms in Ukraine.

“The other reason, though, is practical. Even if we were ready politically today, if we could get consensus on MAP or even membership – I think the consensus here is that there are still reforms that would need to be accomplished by Ukraine… The reforms haven’t reached a level necessary for membership and the consensus isn’t there yet. What we’re doing, at least here, is saying: Look, let’s move forward, drive forward on the reforms, clear away the practical speed bumps, so that when the politics are in place, there aren’t practical impediments,” Mr. Appathurai said.

“We are constantly in cooperation to deepen support when it comes to areas like fighting corruption, strengthening the rule of law, strengthening defense institutions, reform of the security structures (including the intelligence services), continuing to strengthen the armed forces,” Mr. Appathurai said.

These efforts to bolster Ukraine include deterring Russian aggression through statements, coordinated sanctions and providing Ukraine a platform to communicate with individual NATO members about its military requirements, Mr. Appathurai said.
Responding to a question about what more NATO can do to assist Ukraine in the absence of a Membership Action Plan, Mr. Appathurai said that “what we need is more NATO presence in one way or another in Ukraine, to provide support… Political statements, political visits, more military cooperation, more support in the Black Sea, all of that, I’m quite sure, will be seen in the coming period.”

Readers can access a video recording of the event at the following web address: https://youtu.be/EBgmxrDJV1c.