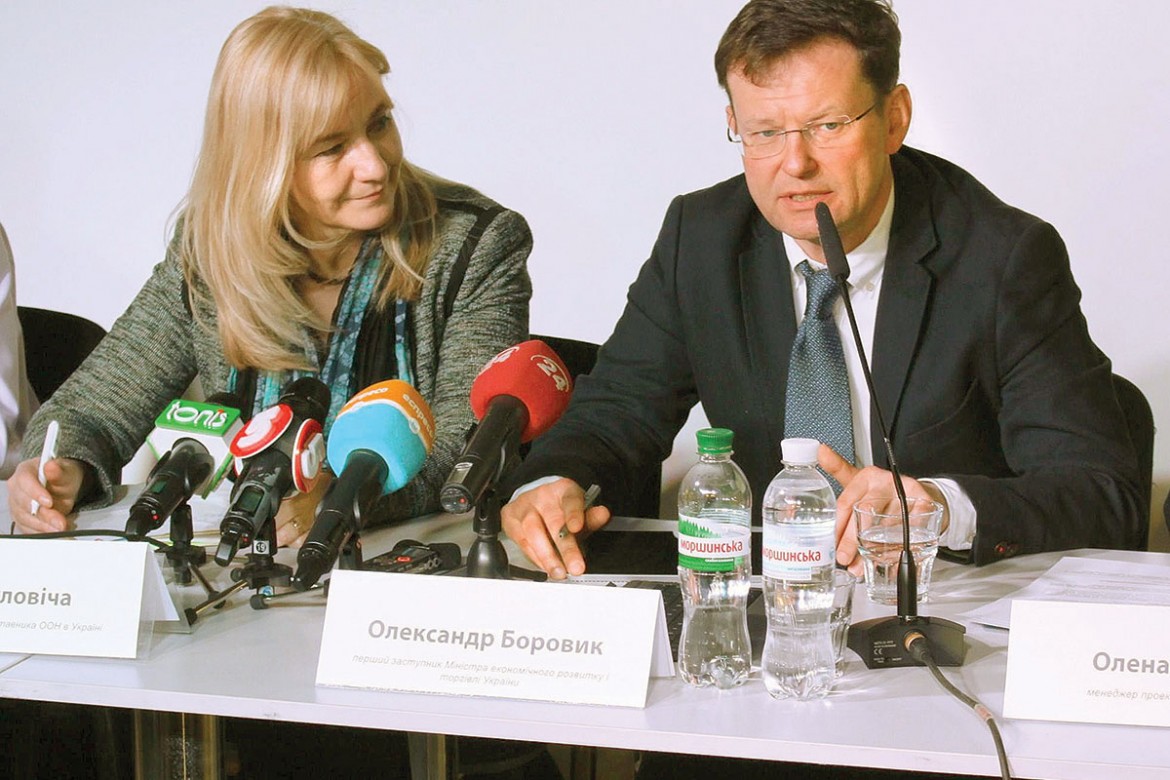 Sasha Borovik, who has resigned as Ukraine’s first vice-minister of the economy.

KYIV – An unprecedented wave of professionals from the corporate sector joined the Ukrainian government following the Euro-Maidan, some of whom have been hailed as top reformers. Among them is Economic Development and Trade Minister Aivaras Abromavicius, a lifelong investment banker who trimmed his ministry by a third and is pursuing harsh deregulation.

Yet his first vice-minister, Sasha Borovik, didn’t think he and other ministers were doing enough. The Lviv-born lawyer for top IT companies, who has lived extensively in the U.S., announced on May 13 that he was leaving the Economy Ministry, citing a lack of strategy in the government and the need for deeper reforms. He also cited a lack of consensus among employees and inertia.

“I don’t doubt there are intellectually strong people in the Ukrainian government,” he told the Focus magazine in an interview published on May 15.

“Unfortunately, I don’t see one thing – the eye of the tiger, as with the Georgian team in its day. You can hardly say they were smarter. They simply worked as like-minded people. And the strength of their leader [Mikheil Saakashvili] was that he surrounded himself with strong individuals and gave them the chance to have a go at what they know how to do. There’s nothing like that in Ukraine at the moment.”

Mr. Borovik’s insight into the inner workings of the Cabinet of Ministers confirmed widespread criticism that the government is doing too little, and moving too slowly, to trim the bureaucracy and liberalize the economy in order to better cope with the war with the Russian Federation and avoid looming financial insolvency.

As recently as May 15, former Georgian President Mikheil Saakashvili, who is living in exile in New York, told reporters at a Kyiv conference that Ukraine’s political establishment has no desire to conduct reforms. Moreover, the very structure of Ukrainian government makes conducting reforms difficult, he said.

“The problem is that a state official thinks he will work for forever, regardless of the change in governments prompted by the maidans,” said Mr. Saaskashvili, as reported by the Ukrayinska Pravda news site.

Such bureaucrats are resisting reform, Mr. Borovik said in the Focus interview. And that’s even after Mr. Abromavicius had cut 30 percent of the ministry’s workers. The friction between a high-tech lawyer and a post-Soviet bureaucracy was so frequent that he said he considered leaving his post on a weekly basis.

“When I came to Ukraine, I thought that I’d be joining a team of people who were thinking the same as I was, who are open to intellectual discussions and know what needs to be done with the country,” he said. “I expected to meet a team of reformers that we saw in Georgia, where everyone was on a single wave, in a single rhythm, where everyone was passionate.”

Mr. Borovik said he had conflicts with Prime Minister Arseniy Yatsenyuk. He told Radio Free Europe/Radio Liberty that he had a conversation with Mr. Yatsenyuk in which he said that he was a technocrat who is supposed to honestly state what he sees.

Mr. Borovik said he was supposed to organize a donor conference and told Mr. Yatsenyuk that European organizations were anticipating reports on how their funds were being spent. The RFE/RL report didn’t offer more details on this exchange.

After Mr. Borovik’s resignation, Mr. Yatsenyuk told Novoye Vremia Chief Editor Vitaly Sych that he had nothing to do with the resignation, which was initiated by Mr. Abromavicius.

In its turn, the ministry released a statement on May 14 that Mr. Borovik was never officially approved, working only as an advisor, and that his work was not constructive, requiring his dismissal. Yet Mr. Borovik maintains it was Mr. Yatsenyuk who decided to pull the plug.

And as with any conflict in Ukrainian government, observers saw a power struggle. In this case, Serhii Liamets, the editor of the Ekonomichna Pravda news site, claimed that Messrs. Abromavicius and Borovik, who are aligned with Ukrainian President Petro Poroshenko, hatched the resignation scandal in order to discredit Mr. Yatsenyuk before the public.

“Borovik’s departure has already become an element of the struggle for power between Poroshenko and Yatsenyuk,” he wrote on May 18. “New scandals are emerging, the goal of which is to entirely ruin the poll ratings of the prime minister and ideally, foment a demand in society for his replacement.”

Indeed Mr. Borovik wrote on his Facebook page on May 15 that he had no personal issues with Mr. Abromavicius. Instead, they had an “intellectual conflict,” in which he argued for a coherent economic strategy and a liberal agenda that involves “moving out of the economy as soon as possible.”

He said Mr. Abromavicius’s deregulation campaign, which aims to eliminate 177 regulatory restrictions at the first stage, needs some design behind it. Already this year, Mr. Abromavicius claims to have led the elimination of 7 percent of licenses and permits.

“We also were disagreeing on the speed of reforms,” Mr. Borovik wrote on his Facebook page. “I argued that they should run faster and go deeper. He thought that we were doing just fine. I didn’t claim to be right but I insisted and continue to insist that such intellectual debates should be encouraged at the ministry and among its leadership.”

According to his own biography, Mr. Borovik was born in Lviv, lived in the Czech Republic, and eventually attended and graduated from Harvard Law School, where he served as editor of the Harvard Law Journal.

In the U.S., he launched a start-up company that digitized brain signals and produced medical equipment based on that technology. He later joined Microsoft, where he served as lead counsel in government affairs and worked closely with the United Nations, the European Union and NATO.

He then worked for Akamai Technologies, where he served as head legal counsel on Europe, the Middle East and Africa. The company operates one of the largest networks of servers around the world and rents capacity on them to customers.

Mr. Borovik came to work for the Economy Ministry in February, leaving a $500,000-a-year job in London and being granted Ukrainian citizenship. Some news reports said he was an American citizen, while others said he had German citizenship.

He previously worked with the Saakashvili government in Georgia and consulted with Slovakia’s former Finance Minister Ivan Miklos, who led his own campaign of reforms. He followed his advice that a risky plan of reforms is better worth pursuing than going down a hopeless economic path.

His first impressions of the Ukrainian government weren’t inspiring. He described pointless meetings and hours wasted chasing after bureaucratic signatures.

“It became apparent that the scale of state interference in the Ukrainian economy was enormous, wasteful and all-encompassing,” Mr. Borovik wrote in a May 12 blog published on the Ukrayinska Pravda news site. “Moreover, the country lacked a complex strategy of implementing economic reforms. Numerous approaches and measures have been developed to ease doing business in Ukraine. Yet it wasn’t understood what type of economy we’re building in Ukraine.”

“Ideally, to achieve success, what’s needed first is to completely reform the personnel policy of the state sector. We still are fulfilling many old functions from the times of state planning,” he noted.

Mr. Borovik is not the first private-sector hire to become frustrated with the Ukrainian government. Another Lviv native, Pavlo Sheremeta, the founder of the Kyiv-Mohyla Business School, served as economy minister in the interim government last year before quitting in September after just six months.

“I don’t know what was going on behind those walls before me,” he told the Ekonomichna Pravda news site in November. “I’m not saying everyone, but most feared to look me in the eye. Also, I often noticed moist palms when I shook hands. As with a shaky voice, that reveals stress. These were signs of the general tone that has ruled there since the days of Stalin.”