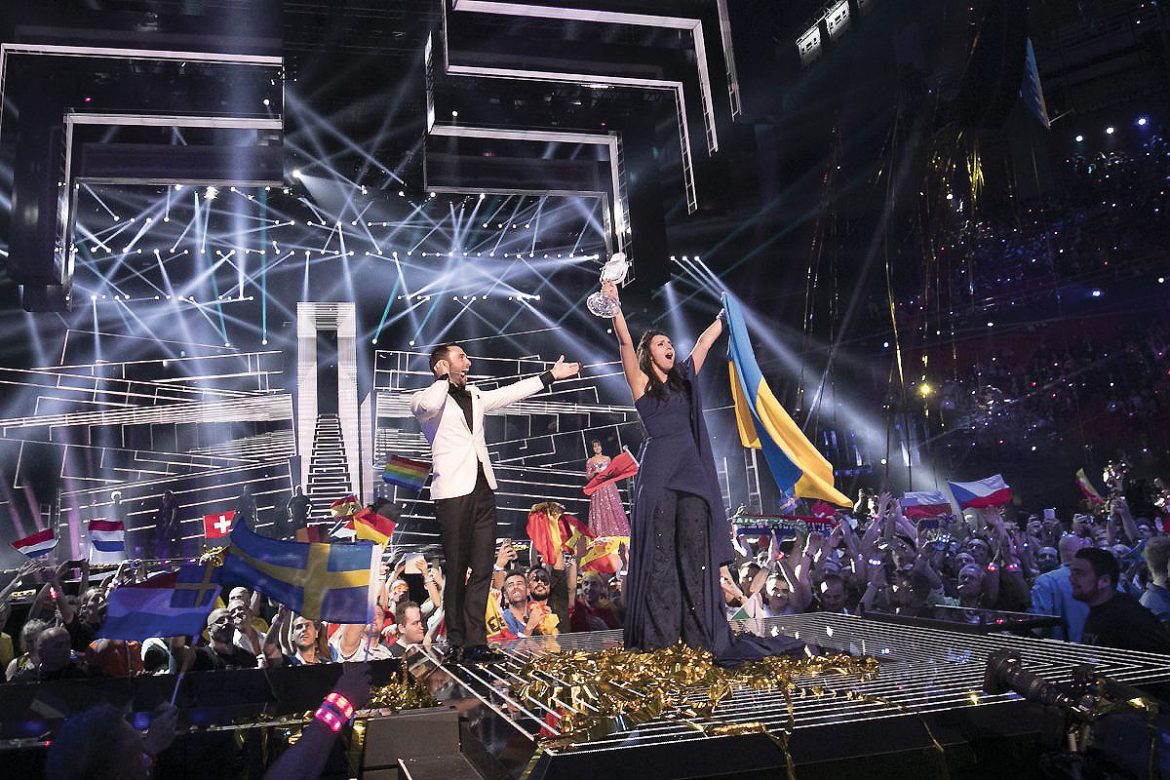 A victory for Ukraine and Crimean Tatars

KYIV – Crimean Tatar R&B/soul-style singer Jamala succeeded in drawing the world’s attention to the Russian government’s persecution of her people by winning the annual Eurovision Song Contest with her song “1944” about Stalin’s mass deportations and genocide.

Jamala finished second among public voting and in second place among juries during the contest’s final round on May 14, placing her ahead of the flashy yet standard fare of pop music presented by runner up Dami Im of Australia and third-place finisher Sergey Lazarev of Russia.

Given the contest’s prohibition against political songs and gestures, Jamala consistently said she was singing only about history leading up to the event, enabling her to participate. Yet on the contest’s eve, she confirmed what was widely suspected that “1944” was just as much about the present.

“Of course, it’s about 2014 as well,” she said in an interview published on May 13 on the guardian.com news site. “These two years have added so much sadness to my life. Imagine – you’re a creative person, a singer, but you can’t go home for two years. You see your grandfather on Skype, who is 90 years old and ill, but you can’t visit him. What am I supposed to do: just sing nice songs and forget about it? Of course I can’t do that.” 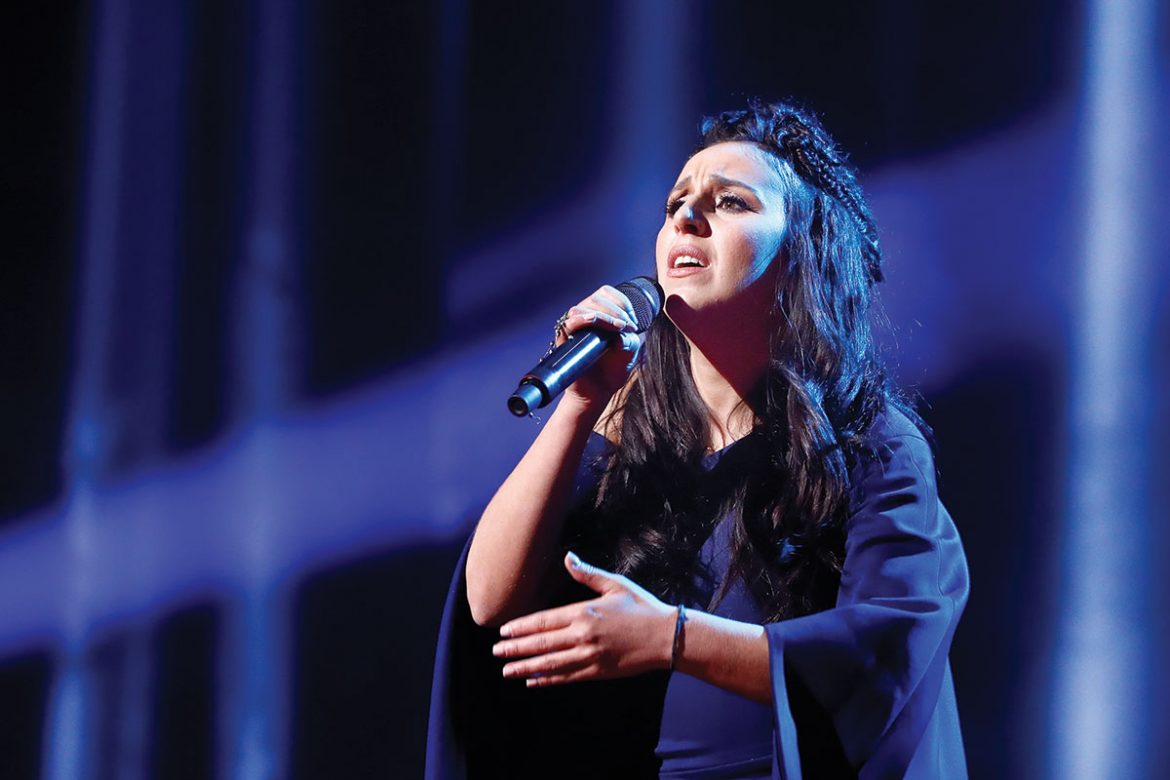 Held annually for 60 years now, the Eurovision Song Contest has become one the few cultural events that draws the attention of hundreds of millions of people, who reside in 42 countries that extend far beyond the European continent. This year marked Ukraine’s 13th year participating and its second victory after Ruslana’s legendary performance in 2004.

How it’s perceived varies greatly as Eurovision is considered a pop culture parody and freak show in the economically developed parts of Europe. Yet it is a source of immense prestige in Eastern Europe and the post-Soviet bloc, whose performers achieve national prominence upon qualifying.

During the May 14 competition in Stockholm, Jamala faced the toughest competition from Dami Im, a Korean-born soloist from Australia who performed a song with a subtle keyboard background that enabled her to showcase her unusually powerful vocal ability.

Also drawing much excitement was Sergey Lazarev, among Russia’s most popular pop stars, whose ensemble thrilled the crowd with its dramatic, upbeat dance melodies and intense video background, against which he acted out unique feats such as climbing a set of stairs, riding soaring asteroids and flying in space.

Ultimately however, both runners-up took the standard path of singing about love as Ms. Im’s heart beat to the “Sound of Silence” and Mr. Lazarev declared “You Are the Only One” to his beloved.

Jamala stood out, not only because of her theme, but also because she included Crimean Tatar lyrics (along with English) and melodies.

Ruslana wrote on her Facebook page in response to Jamala’s first semi-final performance in Stockholm: “The production and effects were never so proper. Jamala sang the mugham authentically!” The reference was to the Azeri melodic style. “That has never happened at Eurovision! But what’s most important to me is that Ukraine is sending the world a message with this song of its deep pain and strong spirit. Only something real is capable of transmitting that energy! Ukraine looks like the real thing.”

That was not the view of the Russian political and mass media establishment, which expressed outrage that a political song was allowed to gain entry. Members of the Russian Duma had requested in February that the song contest reject the song for its political content, which was duly denied.

In the aftermath, Russian Duma Culture Committee First Deputy Head Elena Drapeko said the jury’s decision was “the result of an information war that is being waged and took over such a respected competition.”

Numerous Russian media outlets stressed the point that Mr. Lazarev’s performance earned first place among the public, yet only fifth place among the juries of each nation’s music industry professionals, which the Russians claimed were politicized.

A May 12 broadcast of the semi-finals on the Rossiya One television network went so far as to distort the song’s meaning.

“Here in Europe, her composition is being perceived as yet another prayer about the fate of people, who either from their own will or unwillingly leave their homes in search for a better life. That’s a problem that has come from the 20th century into our 21st century,” the commentator reported, according to the apostrophe.com.ua news site.

And when Jamala’s victory was announced, several leading Russian television networks claimed “1944” was about her relatives being deported, not the Crimean Tatar people as a whole, the news site said.

However, the rejection of Jamala by the Russian establishment was not shared by the public. Indeed, Russians gave her their second-highest number of votes (behind Armenia), while Mr. Lazarev was the favorite among the Ukrainian public. (Each participating country had a jury vote tallied in addition to a vote by the public, which cast its ballots by telephone.)

Meanwhile, the juries of Ukraine and Russia – representing their respective establishments – didn’t give each other’s performers any points.

The citizens of many of these countries still remember Soviet communism and the oppressive measures enacted by Moscow in the post-war period.

Meanwhile, the Crimean Tatars, who make up about 10 to 12 percent of the Ukrainian peninsula’s population, are recognized by Western governments as currently being targeted for political persecution by the Russian government, which militarily occupied the peninsula in March 2014.

Since then, hundreds of illegal arrests and searches of Tatars have been conducted, often accompanied by false criminal charges. In April, the Russian government officially banned the Mejlis, the Crimean Tatar’s representative body, labeling it an extremist organization.

Longtime Mejlis leader Mustafa Dzhemilev, the Ukrainian president’s ombudsman for Crimean Tatar affairs, alleged that the Putin regime is aiming to accomplish what Soviet dictator Joseph Stalin did to destroy his people, who have settled the peninsula since the 15th century.

“Their goal is to intimidate and force people to be quiet,” he said in an interview published by the ua.krymr.com news site on May 15. “Their other goal is to force Crimean Tatars to leave Crimea. Just as in Stalin’s times, they want to see an ethnically cleansed Crimea that is Russian.”

All of Jamala’s relatives still live in Crimea, but she hasn’t visited since the summer of 2014, she told the politico.eu news site in an interview published in March.

Though most Crimean Tatars were deported by Stalin to Uzbekistan, Jamala was born in Kyrgyzstan in 1983. Just how the Jamaladinov family ended up in Kyrgyzstan is unclear, though the singer told the dailymail.co.uk news site that her parents met in a Kyrgyz music school. They gave her the name Susana.

What is now well-known is the disturbing account that Jamala has retold of her great-grandmother enduring the death of her youngest child on the cargo railcar to Uzbekistan. Even worse, she endured the child’s body being flung out of the railcar “like garbage” by Soviet guards who dismissed her request for a proper burial.

By the late 1980s, her parents organized a move to Crimea. In order to buy property, their parents divorced to remove her father’s Tatar-sounding surname from the passport of her mother, who is ethnically Armenian with roots in the Nagorno-Karabakh region, who was able to execute the purchase.

“I remember my first day in Crimea – the former owner saw my father and me, and began to shout. She understood that she sold her house to Crimean Tatars,” she said, as reported by the dailymail.co.uk news site in an article published on May 16.

“But, of course, nothing could be done at that point. My sister and I were the only Crimean Tatar children in the music school. You know children are cruel. They used to repeat what their parents said behind closed doors. My classmates teased me, ‘Why did you come here? Go back to your homeland.’ ”

Jamala grew up in the village of Malorichensk in Crimea and graduated from the Tchaikovsky Music College in Symferopol and the Tchaikovsky Music Academy in Kyiv. Though specializing in opera vocals, she pursued pop music and adopted an R&B/soul style, often employing jazz rhythms, in her repertoire.

She broke onto the Ukrainian pop music scene in 2009 with her victory at the annual New Wave music competition, which was held in Latvia that year. She competed to represent Ukraine at Eurovision in 2011 with a song called “Smile,” only to fall short.

Needless to say, her personal mood turned somber following the 2014 occupation of her homeland. She won the Ukrainian competition to represent the nation at Eurovision amid tough competition from goth rockers and pop-dance performers.

During the selection process, numerous Ukrainian music industry officials were skeptical of her potential for success, given the political nature of her lyrics and unusual musical style.

Andriy Danylko, better known as the drag queen “Verka Serdyuchka” who won second place in the song contest in 2007, predicted in February that Jamala’s performance “wouldn’t touch or interest anyone” if she were selected and that Europeans “absolutely wouldn’t care” about her message.

Jamala forced Mr. Danylko to eat his words, admitting that he was wrong and attributing her success to the very reason he criticized her, which is that her performance broke from the standard format.

In “1944,” Jamala performs the soprano vocals in her trademark R&B/soul style, which have a haunting effect against a lone club beat for most of the song before it erupts into a climactic finale with a dramatic backing harmony of strings. The song also features Tatar ethnic vocals and melodies.

“I needed that song to free myself, to release the memory of my great-grandmother, the memory of that girl who has no grave, the memory of thousands of Crimean Tatars who have nothing left, not even photographs,” she said, as reported by dailymail.co.uk.